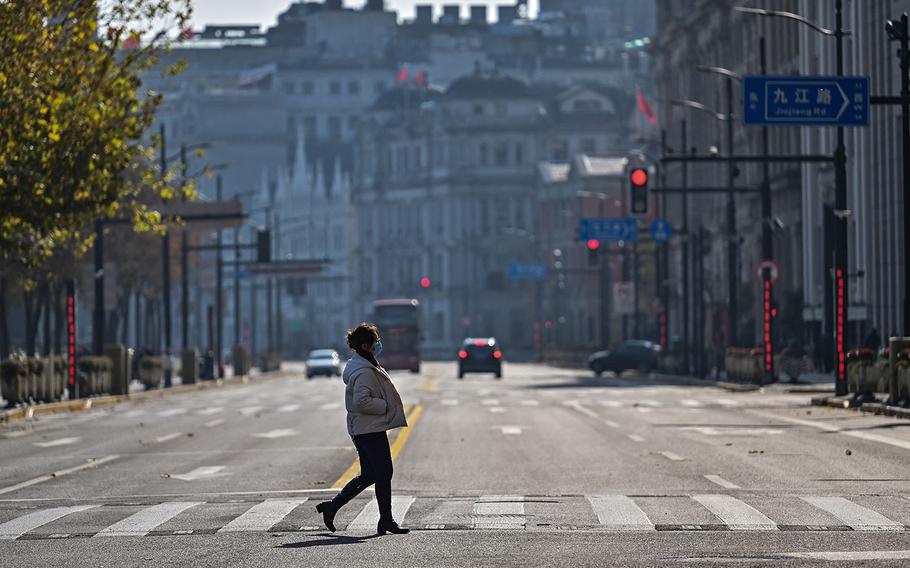 A woman crosses a street on the Bund in the Huangpu district in Shanghai on Dec. 21, 2022. (Hector Retamal/TNS)

(Tribune News Service) — Months after Shanghai endured a brutal lockdown to stop the spread of COVID-19, the virus is starting to make its way virtually unchecked through the megacity’s 25 million-strong population.

Hospitals are struggling to cope with the numbers of infected patients, pharmacies are turning customers away empty-handed, businesses are shutting because staff are off sick, most schools have closed and usage of public transport is plummeting.

At Tongren Hospital, one of Shanghai’s biggest public hospitals, doctors in the intensive care unit were using hallways to handle the overflow of seriously ill on Wednesday. Outside one so-called fever clinic, several dozen visibly sick people were being made to wait in the cold. Several pharmacies near the hospital were no longer allowing people to enter, saying they had run out of cold and fever medicine.

Health care employees described an increasingly dire situation of too many patients and staff falling sick. Cases have also increased after the city stopped requiring people to show negative PCR test results before entering a hospital.

Daniel, a medical worker at a public hospital, said the city wasn’t well prepared for such a severe scenario. A physician at a private hospital in Shanghai who told Bloomberg News a week earlier that everything was calm, said the outlook has worsened. “Shanghai is beginning to look a lot like Beijing in terms of infections,” he said.

The Chinese capital bore the initial hit as China abruptly pivoted from its stringent zero-COVID policy to allowing the virus in unchecked. The about-face, from locking down on a single case to downplaying the COVID threat, unleashed a wave of infections that’s quickly spreading throughout the vast country, with government departments to factories hobbled by outbreaks. China appears to be trying to obscure the scale of the onslaught, censoring social media and re-defining COVID data.

A cancer specialist at one public hospital in Shanghai said that she was told that all doctors would need to work in the ER because it was overrun by patients with fever and many colleagues were out sick. While the number of absent workers in her own clinic meant she couldn’t afford to transfer, the hospital threatened to punish doctors by taking away their bonuses if they didn’t agree, she said. The specialist is avoiding eating, drinking and going to the bathroom at work to limit her chance of catching COVID.

For the city’s residents, the worsening outbreak is a painful reminder of the misery — and futility — of the two-month lockdown, which saw food shortages in one of China’s richest cities.

“We are now repeating what we got through during the city lockdown: lack of delivery capacity, no drugs, super busy hospitals, kids being sent home,” said Peter Hu, an auto company engineer and father of a 2-year-old boy. “Thinking about all this, I’m so mad that our time during the lockdown has been totally wasted.”

Shanghai’s economy shrank almost 14% in the second quarter as the lockdown in the financial and trading hub shuttered factories, curbed consumer spending and disrupted operations at the world’s largest port. The lockdown was lifted at the start of June.

This time round, many residents are choosing to stay at home — either because they are infected with COVID or they are trying to avoid it. The subway operator cut services because of a drop in passenger numbers and staff getting sick.

In the latest week, Shanghai subway usage was down 51% compared to the same period in 2019, according to Bloomberg analysis of the transit data. That compares with a month ago, when metro ridership was 18% below the same period three years earlier.

Businesses are closing. At Art Park mall, not far from Tongren Hospital, popular bistro Baker & Spice told customers that it was no longer serving food because the cooks all had Covid.

Hu, the auto company engineer, has been living in a hotel near his office for a week to avoid potentially infecting his family. So far, Hu has tested negative, but he is losing patience.

“Lately I keep asking friends who get infected if their symptoms are mild,” he said. “I’m thinking to actively get infected by a mild-symptom friend and this terrible life can be over.”

(With assistance from Jinshan Hong and Zibang Xiao.)