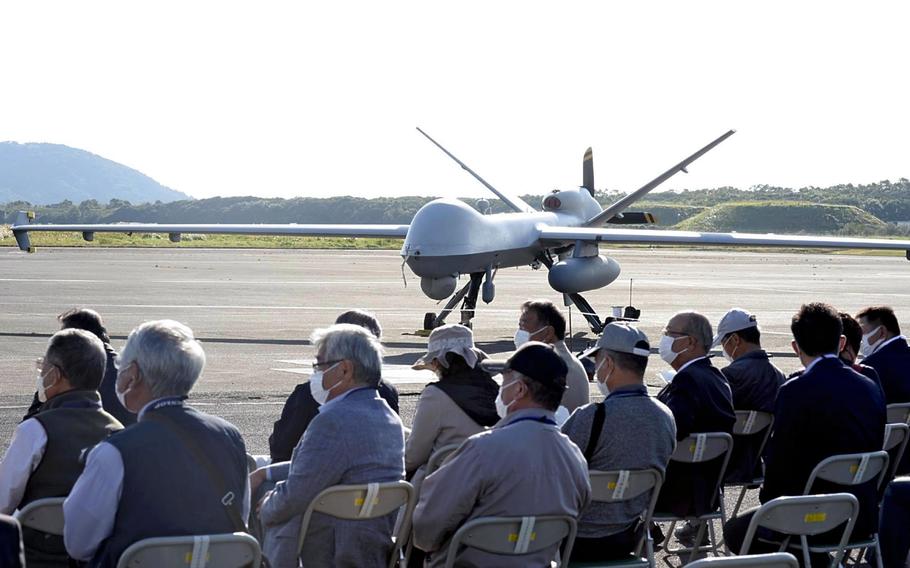 A U.S. military MQ-9 drone is shown to local officials during a demonstration flight at the Maritime Self-Defense Force’s Kanoya Air Base in Kanoya, Kagoshima Prefecture, on Nov. 5. (Japan News-Yomiuri)

TOKYO - Many members stationed at Self-Defense Forces facilities welcomed the Cabinet decision to approve three key security-related documents Friday, as the forces have been long plagued by budget shortfalls and other problems.

On the other hand, some have voiced concerns and requests in the Kyushu and Okinawa regions, where SDF deployments have been gradually ratcheted up in light of China’s aggressive maritime expansion.

Budget shortfalls have hampered the procurement of replacement parts for SDF aircraft, which are used for demanding missions such as surveillance of Chinese vessels and emergency takeoffs in response to other countries’ military aircraft, making them prone to defects such as cracks in components. This has resulted in some aircraft being left in hangars for long periods.

“This is far from normal,” said a veteran pilot of the Maritime Self-Defense Force, looking up at several P-1 maritime patrol aircraft, covered with dust and left unused in a hangar inside a base.

According to a senior Defense Ministry official, training opportunities for patrol aircraft pilots have been declining because parts shortages have reduced the share of aircraft operable for missions, and also due to an increase in the number of surveillance missions against Chinese vessels.

Coordination within a flight team is particularly important for detecting submarines in the sea, including for timing the dropping of sonobuoys from patrol aircraft and flying over a position where it is easy to track vessels. However, training opportunities for such skills has decreased by 80% compared to about 15 years ago, the official said.

The three key documents, which include a National Security Strategy aimed at significantly strengthening the nation’s defense capabilities, set out a policy of eliminating parts shortages by 2027 to secure a system that ensures fully operable defense equipment.

“Boosting the share of equipment that is in good enough condition to be used on missions will also increase training opportunities, leading to improved skills,” the veteran pilot said, welcoming the policy. However, the pilot added: “An increase in defense spending doesn’t necessarily immediately make the SDF stronger. Considering the circumstances surrounding Japan, we need to expedite preparations.”

The government’s move has produced mixed reactions in the Kyushu and Okinawa regions, where SDF and U.S. forces deployments are being increased.

U.S. military MQ-9 reconnaissance drones were deployed to the MSDF Kanoya Air Base in Kanoya, Kagoshima Prefecture, in November. The deployment of the unmanned aircraft, used for surveillance operations in the waters around Japan, is only scheduled for one year. Up to 200 U.S. military personnel will stay at a hotel in the city while being stationed at the base.

“We’re watching how [the three documents] will affect the role and operation of the base,” Kanoya Mayor Shigeru Nakanishi said in an interview with The Yomiuri Shimbun.

In August, a Chinese ballistic missile landed about 80 kilometers off Okinawa Prefecture’s Yonaguni Island, Japan’s westernmost island, located about 110 kilometers from Taiwan, forcing fishermen on the island to refrain from fishing for a few days.

“Island life and the fishing industry can’t be separated from each other,” said Hirotoshi Ogimi, 65, a member of the Yonagunijima town assembly and the head of a local fisheries cooperative association. “I want [the central government] to create an environment where people can live free from anxiety.”

In response to the Cabinet decision, Okinawa Gov. Denny Tamaki on Friday released a statement saying, “I’m concerned that strengthening deterrence capabilities through the buildup of military power will instead increase tensions in the region and lead to an unforeseen incident.”

While expressing an understanding of the difficult security environment, Tamaki touched upon the upgrading of the Ground Self-Defense Force’s 15th Brigade, based in Naha, to a division, saying, “I hope an opportunity will be provided for detailed explanations and consultations.”