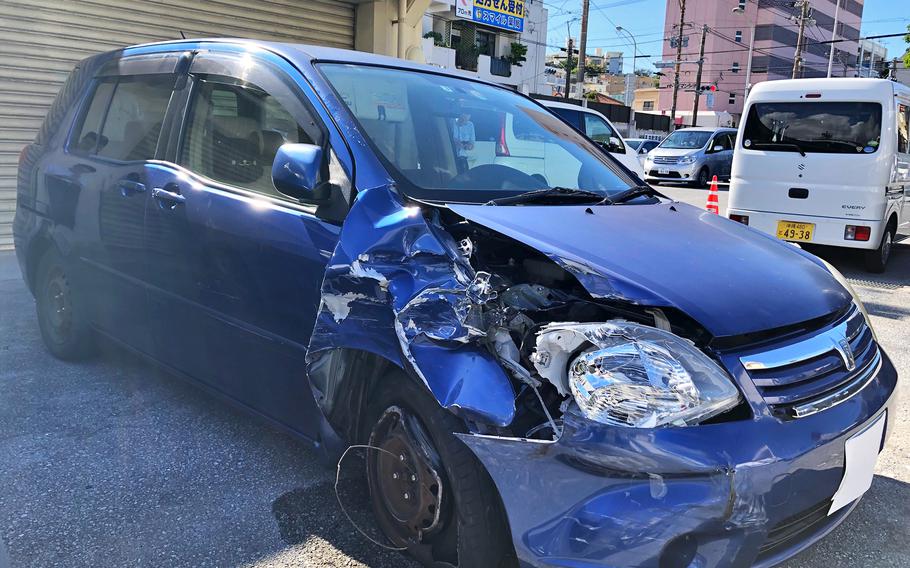 An Army and Air Force Exchange Service employee on Okinawa was arrested suspicion of drunken driving Saturday, Nov. 19, 2022, after his Toyota Raum jumped a highway median and struck another vehicle. (Keishi Koja/Stars and Stripes)

CAMP FOSTER, Okinawa – Japanese police say an Army and Air Force Exchange Service employee was driving under the influence of alcohol over the weekend when he crossed the median of Okinawa’s main thoroughfare and struck another vehicle.

Christopher Leal, 27, was arrested on suspicion of drunken driving shortly after the crash at 12:03 p.m. Saturday in the Ameku area of Naha, a city police spokesman told Stars and Stripes by phone Monday.

A 46-year-old Okinawan woman in the other car was not injured, the spokesman said. Leal was driving a blue Toyota Raum, a five-door minivan, but the spokesman could not provide the make and model of the woman’s vehicle.

Leal told police he was heading northbound on Route 58 when the car in front of him stopped suddenly, the police spokesman said. He said he jumped the median to avoid a collision and struck a southbound vehicle stopped at a red light.

A breath test measured Leal’s blood alcohol content at 0.07%, more than twice Japan’s legal limit of 0.03%. For comparison, all 50 U.S. states have set 0.08 as the legal limit for driving under the influence or while impaired.

Leal, who was still being held Monday at the Naha police station, said he did not believe there was alcohol in his system, the police spokesman said.

Police planned to send a charge of violating Article 65 of Japan’s road traffic act, which specifically prohibits driving under the influence of alcohol, to prosecutors on Monday, the spokesman said. Leal will then likely be released, he said.

It’s customary in Japan for some government officials to speak to the media on the condition of anonymity.

It is unclear which U.S. military installation Leal works on. An AAFES spokesman, Army Staff Sgt. Mark Kauffman, said he would look into the matter but could not respond Monday.