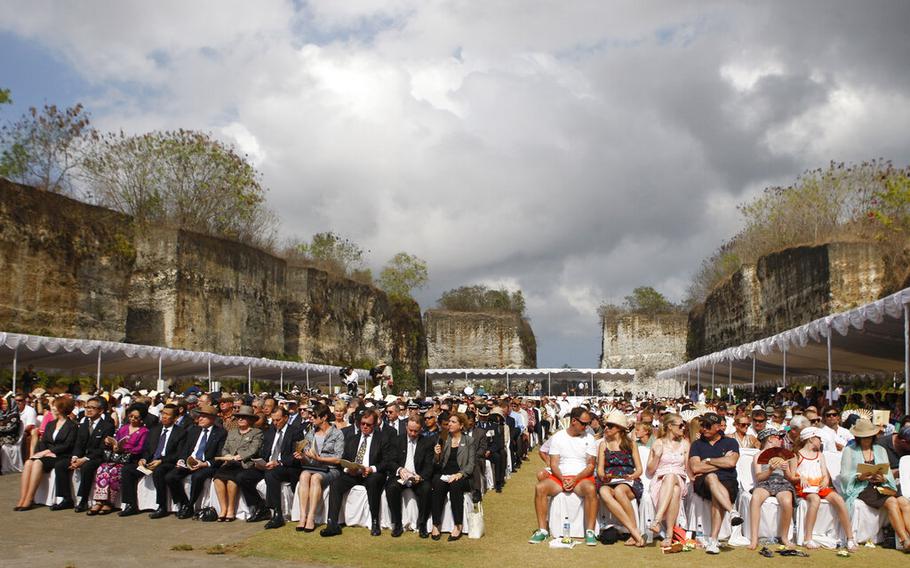 People attend a memorial service in Jimbaran in Bali, Indonesia, on Oct. 12, 2012, marking the 10th anniversary of the 2002 Bali bombings terrorist attacks that killed 202 people, including 88 Australians and seven Americans. (Made Nagi, Pool via AP)

JAKARTA, Indonesia - When Ali Imron was an active member of the Indonesian terrorist group Jemaah Islamiyah, he claimed that he needed only two hours to turn a recruit into a killer.

"Two hours was all it took me to convince someone to become a suicide bomber," he told The Washington Post. "So I know the power of terrorists. I know how compelling they can be."

Imron, now 43, has been in prison since 2003 for assembling and transporting the explosives used in the Bali bombings, a terrorist attack in Indonesia that killed 202 people and left 200 more injured. From his cell in the Greater Jakarta Metropolitan Regional Police Headquarters, or Polda Metro Jaya, Imron says he now uses his skills of persuasion for good. He says he has dedicated himself to preventing others from making the same decisions he made - and he says he could do it more effectively if he were freed.

In the two decades since the Bali bombings, the Indonesian government has transformed dozens of ex-terrorists like Imron into prominent deradicalization advocates, carving out roles for them in the country's wider efforts to confront religious extremism. The approach has increasingly come under scrutiny as Indonesia debates whether to grant greater freedoms to former terrorists.

Since the Bali bombings in 2002, few attacks on such a scale have occurred in Indonesia. Between 2003 and 2009, the Jakarta JW Marriot, the Australian Embassy and the Ritz Carlton were attacked, most likely by Jemaah Islamiyah, but those assaults did not cause a death toll as severe as in the Bali bombings.

This success in squashing the movement has been attributed to the police's ability to arrest key players and dismantle the terrorism networks, as well as to deradicalization efforts by former members such as Imron.

"Post-Bali bomb, the police, with international support and pressure, moved relatively effectively in shutting down JI networks," said Ian Wilson, a lecturer in politics and security studies at Murdoch University in Perth, Australia.

From 2002 to 2019, Indonesia had a recidivism rate of less than 6 percent for those convicted of terrorism-related offenses, compared with 13 percent for crimes such as drug offenses, government data shows.

"I give the Indonesian authorities a lot of credit for their creativity," said Zachary Abuza, a professor at the National War College who has been studying deradicalization programs across Southeast Asia. "The Indonesians have given these people [former militants] really important soap boxes, which we would never do in the West."

According to Judith Jacob, a security analyst at the risk and intelligence company Torchlight, Indonesia's embrace of former terrorists in deradicalization efforts is rare. Only a handful of other countries have tried similar approaches, with varying degrees of success.

In Northern Ireland, ex-political prisoners have played a central role in violence prevention since the brokering of peace in the 1990s. Saudi Arabia's version of deradicalization involves putting former militants into facilities where they learn about more-moderate Islam, receive counseling and take part in fitness programs.

Since Imron's arrest, Indonesian authorities have enlisted his help in a variety of ways, allowing him to visit schools and conduct television interviews from prison. In 2007, despite public backlash, he was allowed to publish a book warning others about the dangers of terrorist ideologies and how to steer clear of them.

"It needs to be bigger than just the police," Imron said of Indonesia's deradicalization efforts. "It has to be about prevention, not just arrests."

Imron doesn't wear prison overalls and is allowed his own clothes because he is a long-term inmate. His hair, eyebrows and beard are flecked with gray, and he has a paunch from lack of exercise. He has apologized publicly many times for his actions, but some victim groups have rejected his expressions of contrition.

"I feel the burden of what I did with me always," Imron said in October, days before the 20th anniversary of the Bali bombings. "Until I die, I will keep saying I'm sorry."

Jemaah Islamiyah emerged in the 1990s seeking to establish a Muslim caliphate across Southeast Asia and came to worldwide attention with the Bali bombings. As the government boosted funding and resources for counterterrorism efforts, there was a parallel effort at deradicalization outsourced to civil society groups or "ex-jihadis," Jacob said. Imron is perhaps the most prominent, but there are others, including Umar Patek, who also was involved in the Bali bombings. The attack, carried out on Oct. 12, 2002, by suicide bombers, targeted a street popular with foreigners and involved the detonation of a backpack bomb inside a nightclub, then a car bomb seconds later as people fled into the street.

Patek, 52, was sentenced to 20 years in prison in 2012 for mixing the chemicals used in the bombs. In August this year, after serving 10 years of his sentence, he became eligible for parole. Part of his application for early release cited his participation in a deradicalization program in prison.

In a video interview released by the prison in East Java where he is incarcerated, Patek said that if released, he would do more to help prevent extremist violence. "I'd like to help the government to educate people about the issue, for millennials and maybe terror inmates in prisons," he said.

But news of Patek's potential release has drawn the ire of officials and victims' families in Australia, some of whom have cast doubt on the effectiveness of Indonesia's deradicalization efforts.

Patek's release "will cause further distress to Australians who were the families of victims of the Bali bombings," Australian Prime Minister Anthony Albanese told reporters in Queensland. "We lost 88 Australians in that terrorist attack. It was a barbaric attack."

Some family members of the victims, however, have come to appreciate the ex-militants' efforts. Hayati Eka Laksmi's husband was killed in the bombing when the car he was in was blown up by the van that exploded outside the Sari Club in Kuta. She met Imron in prison.

"At first, I wanted to slash at him with a razor and rub chilis into his wounds," she said. "But then I would have been the same as him. I didn't want to fight violence with more violence. I forgave him so he could be better. I wanted him to be better so that he and others wouldn't go back to Jemaah Islamiyah. I told him, 'Don't let anyone else feel like us.' "

While Indonesian authorities have touted the effectiveness of their deradicalization efforts, Jacob, the security analyst, cautioned that it's not clear how much these former radicals have changed their views.

"Does it mean that an individual renounces all beliefs in a group's ideology or just a commitment to violence?" she asked.

But Julie Chernov Hwang, a professor at Goucher College and the author of "Why Terrorists Quit," maintains that figures such as Imron play a decisive role.

"His influence, although limited to inmates in Polda Metro Jaya, has been tangibly felt," she said, adding that many of the people she interviewed between 2010 and 2016 cited conversations with Imron as important to challenging their views on violence.

His influence, however, is largely limited to other inmates at his prison, Chernov said. "Were Imron allowed more freedom of movement, he would have a wider reach."

"In here, I can't work to deradicalize people effectively," he said.

"Because I'm the one who did it, I can help to guide others so they don't do the same things," he said. "The law can't make terrorists conscious about what they've done wrong."