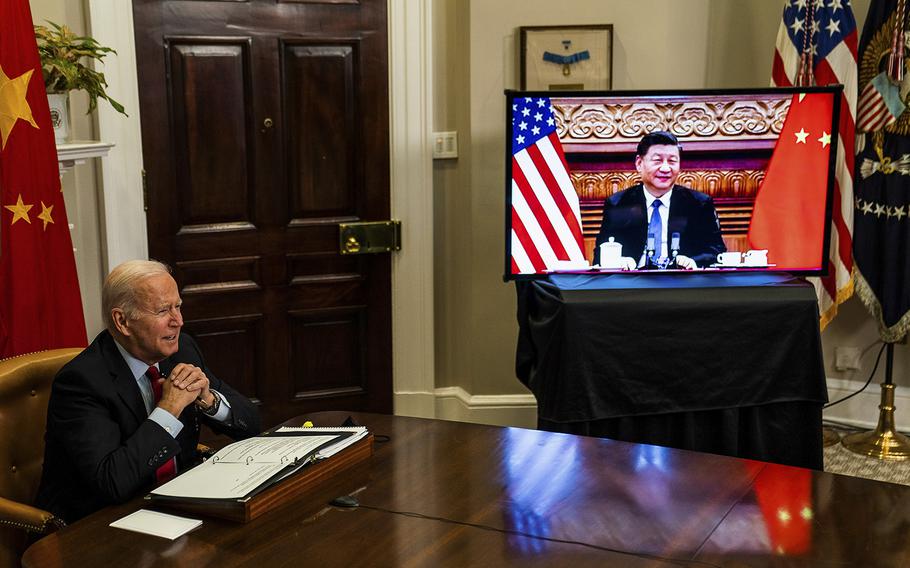 JIMBARAN, Indonesia — This week's face-to-face meeting between President Biden and Chinese President Xi Jinping may represent a welcome easing of tensions, but it is unlikely to arrest a slow erosion of financial and economic ties between the United States and China.

The past five years of U.S.-China acrimony over trade, technology and Taiwan have set in motion a realignment that is playing out in financial markets and corporate boardrooms across the globe.

Investors in October pulled $8.8 billion from Chinese stocks and bonds, continuing an exodus that began after the United States and Europe imposed sanctions on Russia for its invasion of Ukraine, according to the Institute of International Finance (IIF). At the same time, manufacturers trying to bolster vulnerable supply chains are turning to Vietnam or India instead of China.

Business groups applauded Biden and Xi for stepping back from open confrontation and said planned follow-up meetings between senior U.S. and Chinese officials could herald further improvement. But, at least for now, the relationship between the world's two largest economies seems stuck midway between rupture and rapprochement.

The three-hour meeting on the Indonesian resort island of Bali differed from Trump-era summits, which were dominated by trade and tariffs. This time, the U.S. readout of the talks mentioned Taiwan and human rights in Xinjiang, Tibet and Hong Kong before referring to "ongoing concerns about China's nonmarket economic practices, which harm American workers and families."

For its part, the Chinese government dismissed notions of an inevitable clash. Biden, who last month banned China from acquiring advanced U.S. computer chips and related equipment, assured Xi that the United States is not seeking to "decouple" from China or limit its economic development, according to China's Ministry of Foreign Affairs.

"Starting a trade war or a technology war, building walls and barriers, and pushing for decoupling and severing supply chains run counter to the principles of market economy and undermine international trade rules. Such attempts serve no one's interests," the Chinese account of the meeting said.

The session, however, did little to clear the clouds that have enshrouded financial links between the giants. Numerous investment funds this year, including public employee retirement plans in Florida and Texas, have reduced or eliminated their Chinese holdings.

On Tuesday, S&amp;P Global Ratings warned investors about the consequences if the United States were to impose Ukraine-style sanctions on China. With the Chinese economy several times larger than Russia's, the economic fallout would be enormous.

Blocking Chinese financial institutions from using the U.S. dollar - perhaps in response to a future attack on Taiwan - might leave them unable to make required interest payments on their bonds, S&amp;P said. Of 170 bond offerings by Chinese banks, investment firms and insurance companies over the past three years, none allow for repayment in a currency other than the dollar, the ratings agency said.

Mounting national security alarms already have cast a chill over what were once routine investments.

BlackRock, which manages more than $10 trillion in assets, scrapped plans to market a new fund that would invest in Chinese government bonds, fearing it might run afoul of a bipartisan anti-China mood in Washington, according to the Financial Times.

It's easy to see why the firm balked: This week, the House Financial Services Committee held a hearing on the potential national security risks associated with allowing U.S. financing of "foreign rivals and adversaries."

If some investors fear Washington's reaction, others are equally concerned about political developments in China. Tiger Global Management, an American investment firm, reduced its Chinese stock holdings after Xi last month broke with recent norms and began a third term as China's president - leaving some analysts convinced he plans to rule indefinitely.

The company soured on Chinese investments because of rising geopolitical tensions and the economic fallout from Xi's rigid zero-covid policy, according to an individual familiar with the decision who spoke on the condition of anonymity to discuss internal company deliberations.

In the wake of China's recent 20th Communist Party Congress, investors fret that market-oriented economic development is no longer the government's priority. Instead, Xi is increasing the state's role in the economy and cementing one-man rule.

"The biggest open question is whether China is a safe environment for foreign investors," Carl Weinberg, chief economist for High Frequency Economics, wrote in a client note on Tuesday.

Starting in 2019, foreign investors poured into China's bond market to take advantage of higher returns than they could earn in the United States. But in recent months, those flows have reversed.

Foreign investors dumped roughly $70 billion in Chinese bonds over a four-month period starting in March, according to IIF.

Both Russia's Feb. 24 invasion of Ukraine and the start of the Federal Reserve's interest rate hikes in March caused investors to rethink their positions, said David Loevinger, managing director of the emerging markets group for TCW, a Los Angeles-based asset management firm.

"At the [Winter] Olympics [in Beijing], Xi gave Putin the big bear hug and two weeks later, the tanks rolled," said Loevinger, a former U.S. Treasury Department official. "People were asking if China would be subject to sanctions. Definitely, that was a concern."

Additional capital outflows would be a drag on Chinese financial markets. But the bigger issue is how companies are retooling their supply chains.

For decades, U.S. and other manufacturers were drawn to China by its low-cost labor. But recurring production interruptions during the pandemic convinced them to establish multiple supply lines, despite the added cost.

Companies are looking for alternative sites outside China for several reasons. The overall U.S.-China relationship has steadily deteriorated. Repeated covid lockdowns have made Chinese factories less dependable. And a bipartisan Washington hostility toward China makes executives wary of betting too heavily on a country that is out of favor.

Among the companies beefing up production elsewhere is Apple, which will rely on India for a growing share of smartphone output.

U.S. imports from China today are below their pre-trade war trend, according to a recent analysis by economist Chad Bown of the Peterson Institute for International Economics. The United States now buys products such as clothing and footwear from Vietnam that it once purchased from Chinese suppliers.

While trade data shows no wholesale decoupling, direct investment across the Pacific is evaporating. Chinese investments in building or acquiring American factories peaked in 2016 at almost $49 billion, before sinking to less than $6 billion last year, according to the Rhodium Group, a New York-based consultancy. U.S. direct investment in China has fallen from its 2008 peak of nearly $21 billion to about $8 billion in 2021.

For now, the shift away from China appears to be about redirecting future development rather than a broad retreat from an existing footprint.

A third of U.S. companies in China said they had steered new investment to other countries in the past year, almost twice the percentage that did so in 2021, according to a recent survey by the American in Shanghai. Just 1 in 6 companies are considering moving their existing China operations somewhere else.

"Xi Jinping's clear signals about the contours of his administration's economic policies, which will be less favorable to private enterprise, are likely to discourage U.S. investments in China and lead to continued gradual economic and financial decoupling," said former IMF official Eswar Prasad, who's now an economics professor at Cornell University.

To be sure, after four decades of growing U.S.-China integration, there is little prospect of a complete divorce. Roughly $700 billion worth of goods will move between the two nations this year, an increase over last year's level and more than six times as much as in 2000, according to Census Bureau statistics.

Increasingly affluent Chinese consumers are critical to the profit hopes of U.S. companies including General Motors and Microsoft.

Companies also cannot easily duplicate elsewhere their Chinese production arrangements. Ports, roads and rail networks in China are among the best in the world, complicating any plans to abandon the country.

"Unless there is real political pressure, I don't see it," said Michael Pettis, a finance professor at Tsinghua University's Guanghua School of Management in Beijing. "Once covid is behind us, all that really matters is that if you move manufacturing outside China, you immediately become less competitive."

Still, national security considerations are overshadowing pure economics in both nations. In Washington, the Biden administration is working on new regulations to constrain outbound investment to China. Xi wants China to produce more of the advanced technologies that are required for military and commercial supremacy.

Expanding U.S.-China commercial ties under these conditions will not be easy.

"It is hard to manage competing interests," said Eric Robertsen, global head of research and chief strategist for Standard Chartered Bank in Dubai. "But we have to find areas where we can cooperate. It's in nobody's interest for things to go off the proverbial cliff."