US VP Harris arrives in Thailand for Asia-Pacific summit 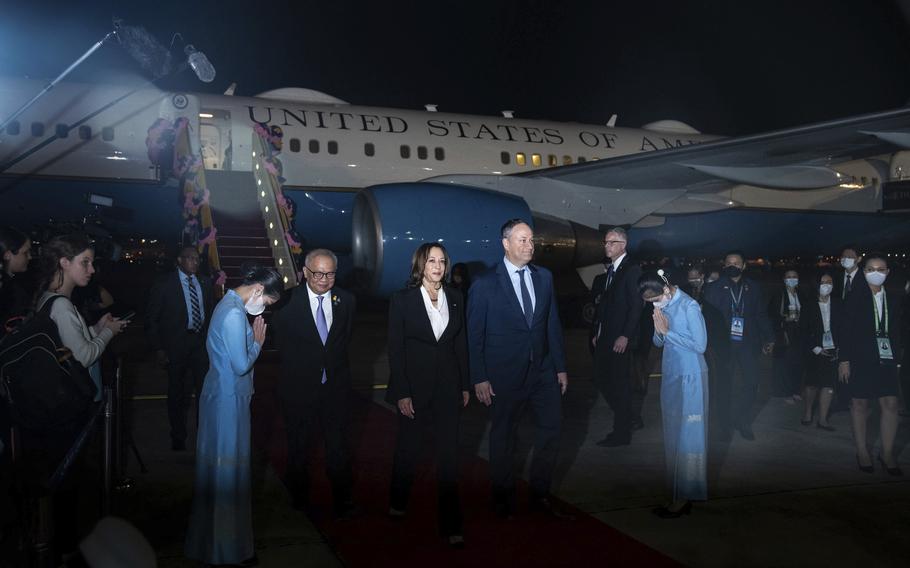 BANGKOK — U.S. Vice President Kamala Harris arrived Thursday in Thailand, where she plans to affirm America's commitment to Southeast Asia and drive home the message that the region can count on the United States.

She and other APEC leaders are expected to discuss the Ukraine war, soaring inflation, food and energy shortages and a more assertive China. Chinese President Xi Jinping is also attending the summit, which is taking place in a heavily guarded venue in Bangkok.

Harris is standing in for Biden, who returned to Washington to host his granddaughter's wedding at the White House.

A senior U.S. administration official said the trips to Southeast Asia by Biden and Harris show the deepening of America's engagement with the region, and that it is a friend and partner that can be counted on. The official spoke on condition of anonymity in order to speak more freely.

Harris will also deliver a speech to a business conference on the summit sidelines. Officials said she will outline priorities for next year's APEC summit, which the U.S. will host.

Leaders of the 21 countries and territories in APEC, whose official mission is to promote regional economic integration, are meeting formally in closed-door sessions Friday and Saturday. Most of APEC's work is technical and incremental, carried out by senior officials and Cabinet ministers, covering areas such as trade, tourism, forestry, health, food, security, small and medium-size enterprises and women's empowerment.

Over the weekend, Harris will hold talks with Thai Prime Minister Prayut Chan-ocha that are expected to focus on expanding cooperation on climate change, clean energy and sustainable development. They may also discuss the situation in Myanmar, where violence has escalated since the military seized power last year.

She will host a roundtable discussion with activists and business leaders on climate change and the Mekong region before departing for the Philippines.

Biden held highly anticipated talks with Chinese President Xi during the G-20 summit earlier this week in which they attempted to manage their differences, including over Taiwan, which China claims as its own territory. They expressed a "shared belief" that the use or even the threat of use of nuclear weapons in the Ukraine war was "totally unacceptable," Biden said.

The White House said they also agreed to resume cooperation on a range of shared global challenges including climate change, health and food stability. Beijing had cut off such contacts in protest after House Speaker Nancy Pelosi visited Taiwan in August.