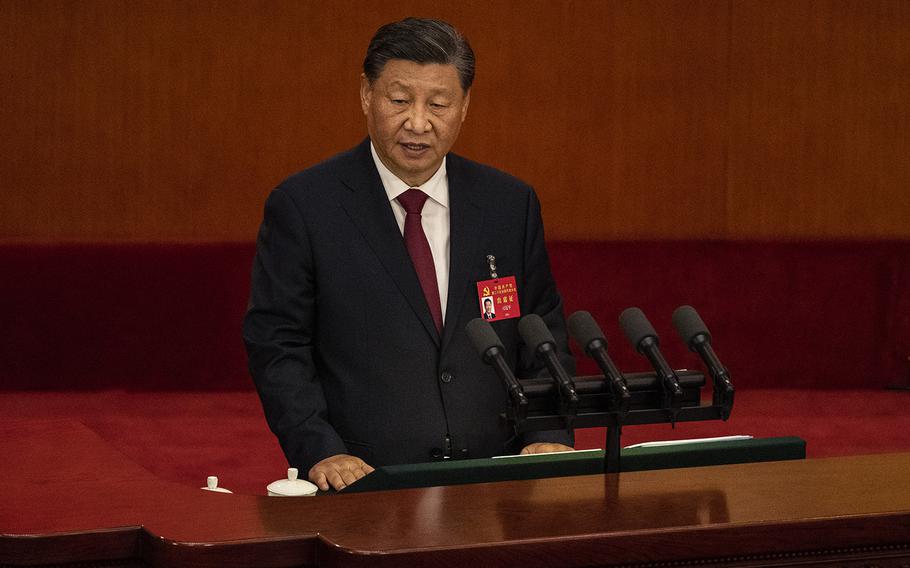 Chinese President Xi Jinping speaks during the Opening Ceremony of the 20th National Congress of the Communist Party of China at The Great Hall of People on Oct. 16, 2022, in Beijing. (Kevin Frayer/Getty Images/TNS)

TOKYO — Chinese President Xi Jinping is set to hold his first in-person meeting with Japanese Prime Minister Fumio Kishida on Thursday, the latest in a series of summits that appeared aimed at calming tensions with U.S. allies.

The consultations between the leaders of the Asia's two largest economies will be the first of their sort in three years and come days after Joe Biden's own discussions with Xi. The U.S. president expressed confidence after the talks that the countries could avoid a "new Cold War."

The summit will be held on the sidelines of the Asia-Pacific Economic Cooperation forum in Thailand. It is expected to start Thursday evening, local time, Kyodo News reported.

While Kishida's government has been careful not to push relations with its biggest trading partner China anywhere near a breaking point, it has criticized Beijing's crackdown on pro-democracy activists in Hong Kong. It has also let Xi know that Tokyo sees any potential military aggression toward Taiwan as a threat its own security.

The meeting with Kishida comes as Chinese leaders have been busy meeting U.S. allies and partners during international gatherings in the past few days. Xi has underscored the need for partnership with major economies and tried to reassure leaders who have seen tensions rise with Beijing in recent years.

A calmer atmosphere may help Kishida reestablish the "constructive and stable relations" he has said he wants with his country's biggest trading partner. But Kishida openly criticized China for infringements of Japanese sovereignty at an ASEAN meeting in Phnom Penh on Sunday, Japan's Foreign Ministry said. Ships from Japan and China continue to chase one another around disputed islands in the East China Sea.

Chinese Foreign Ministry spokeswoman Mao Ning told reporters at a regular news briefing in Beijing on Wednesday the meeting between Xi and Kishida was "very significant" and the two "will exchange views on bilateral relations and international regional issues of mutual interest."

Japan, which tries to strike a balance between China and its sole security ally, the United States, has also found itself in a difficult position over Biden administration initiatives that seek to secure supply chains less dependent on Beijing.

This has included Biden's move to tighten controls on exports of some chips and chipmaking equipment to China. Nudged by the U.S., Japan this month announced government aid for a domestic next-generation chip manufacturing venture.

China raised pressure on Kishida with military drills around Taiwan in August following U.S. House Leader Nancy Pelosi's visit to Taipei. This included lobbing missiles into waters close to Japan's Okinawa island chain. China called off a meeting between Foreign Minister Wang Yi and his Japanese counterpart over a Group of Seven statement expressing concern over the exercises.

The missile incident added momentum to the Kishida government's plans to increase defense spending and expand the range and number of missiles in Japan's arsenal that could be used to hit targets on the Chinese mainland.

As a rift opened up between the U.S. and China, Beijing had tacked closer to Russia, taking part in joint military exercises near Japan. Kishida has sought stronger ties with NATO, becoming the first Japanese premier to attend the group's summit in June. He attended a joint G7-NATO emergency summit about the missiles that landed in Poland on Wednesday.

At the same time, the massive flow of Chinese tourists to Japan that helped revamp Japan's image in China in previous years remains at a halt due to Xi's "zero-COVID" policy.

Yet business links between the two remain deep, and the leaders exchanged congratulatory messages on the 50th anniversary of the establishment of ties in September, although neither of them attended celebratory events.

Takashi Hirokawa and Colum Murphy contributed to this story.