On foreign trip, Biden meets with dictators he has criticized 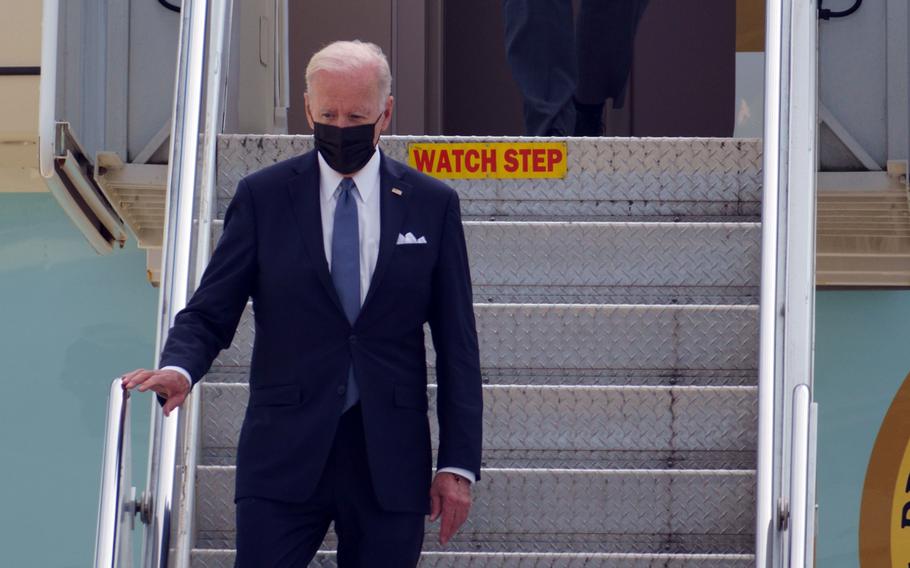 DUA NUSA, Indonesia — When President Biden met here with Xi Jinping, whom he called a “thug” not long ago, he warmly greeted the Chinese president, smiling and clasping his hand. A few days earlier he was escorted by Egyptian President Abdel Fatah El-Sisi, and when asked by reporters about an activist jailed by Egypt, Biden brushed it aside and draped both hands over Sisi’s shoulders.

At another point in this whirlwind trip, Biden stopped in Phnom Penh for a meeting of Southeast Asian leaders and sat down with Cambodian Prime Minister Hun Sen, who has been in power for nearly 40 years and whose associates have been targeted by U.S. sanctions.

Even as he has rallied allies against the brutal war launched by Russian President Vladimir Putin against Ukraine — culminating in a joint statement of Group of Seven and NATO leaders as his trip was wrapping up — Biden also has engaged with leaders he has criticized and that his administration views as antidemocratic.

Biden has repeatedly pledged to put human rights at the forefront of his foreign policy, but that vow has sometimes run up against geopolitical reality, and rarely more so than on this trip. Biden prides himself on personal connections with foreign leaders, and it can be hard to avoid meeting with leaders who are hosting a summit.

The engagement has created discordant images. In meeting Hun Sen, Biden “expressed appreciation for Cambodia’s leadership” of the Association of Southeast Asian Nations — while also urging the release of “activists detained on politically motivated charges,” the White House said.

As a candidate, Biden called Turkish President Recep Tayyip Erdogan an “autocrat” and suggested the United States should support his political opponents. After meeting with Erdogan on Tuesday, the White House said Biden “made clear we stand with our NATO ally” after recent attacks in Istanbul.

As the trip wrapped up, two events highlighted the contrast. Biden convened an emergency meeting of U.S. allies Wednesday to respond to a missile that landed in Poland as a result of the Russia-Ukraine war, his latest action leading a global coalition against the authoritarian Putin regime.

And with former president Donald Trump announcing his third run for the presidency in a bombastic speech Tuesday night, it was a reminder that a central reason Biden ran for president was to challenge Trump’s habit of embracing autocrats and their anti-democratic policies.

As Trump was declaring his candidacy Tuesday night, Biden trekked to a lush Indonesian forest to plant a mangrove tree with other world leaders. He took time with the hoe, carefully moving the soil to ensure the tree had a firm foundation, a symbolic commitment to global harmony and countering a warming climate.

In all, this has been one of the more consequential and head-spinning foreign trips of Biden’s presidency — at a time when back in the United States, control of Congress remained undetermined and Republicans were in open revolt against their leaders.

Biden arrived overseas triumphant, after his party’s stronger-than-expected midterm results in which Americans rejected election deniers in every swing state. He cited that outcome to tout the power of American democracy, saying the election results strengthened his hand diplomatically.

Biden’s aides hoped his performance on the world stage would provide a favorable contrast with Republican squabbling, and he had an opportunity to showcase American leadership here on Wednesday morning, when leaders awoke — or, in some cases, were awoken — to learn that missile attacks had taken place in Ukraine, and that a missile had landed in NATO-member Poland.

Biden convened the leaders in a conference room at his hotel, and — while saying later that the missile that killed two in Poland likely did not originate in Russia — stressed that Russian aggression had to stop its attacks. “They’ve been totally unconscionable, what they’re doing — totally unconscionable,” he told reporters.

“It’s merciless,” he added later, while meeting with newly appointed British Prime Minister Rishi Sunak. “It’s almost — in my words, not yours — barbaric, what he’s doing.”

He shrugged off Trump’s campaign announcement as he walked through the Balinese mangrove forest. After a meeting with French President Emmanuel Macron, a reporter asked Biden if either one of them had a response to Trump’s declaration, and he responded, “Not really,” as he and Macron exchanged faint smirks.

Jake Sullivan, Biden’s national security adviser, when asked why the president was spending time with authoritarian leaders, said the president was simply meeting with the heads of the host countries. When Biden arrived in Bali for the summit of the leaders of the Group of 20 industrialized nations, for example, he met with Indonesian President Joko Widodo, whose government has failed to act on accusations of serious human rights violations.

“He will have plenty of opportunity to engage deeply with core democratic allies, but he’s going to engage across the board in service of America’s interests and to advance America’s strategic position and our values,” Sullivan said. “And that’s what guides his decision on every leader he chooses to engage with.”

The reporters traveling with Biden also ran up against officials from regimes with little respect for press freedom.

Egyptian officials guarding the doors of the room where Biden met with Sisi attempted to physically block several American journalists. During the meeting with Xi, a member of the Chinese delegation yanked the backpack of a television producer who asked Biden about human rights, nearly knocking her to the ground.

Still, Biden drew lines. He had no plans to meet with Saudi Arabia’s de facto ruler, Mohammed bin Salman. Biden was criticized earlier this year after he traveled to Jiddah and gave a fist bump to the crown prince, who has been accused of being a brutal dictator and who U.S. intelligence officials have concluded was behind the 2018 murder of Washington Post journalist Jamal Khashoggi.

He also did not appear to interact with Sergey Lavrov, the Russian foreign minister who attended the G-20 summit after Putin opted not to come.

A senior administration official said that there was unlikely to be a traditional group photo of the leaders, but did not address whether that had to do with any U.S. opposition to having Biden appear with Lavrov or other Russian leaders.

“I don’t think you’re going to see any shortage of venues where there are very candid, very frank discussions across leaders from the G-20 in a variety of settings,” the official said.

Some of Biden’s meetings during the trip appeared to produce, if not breakthroughs, at least some movement. Dialogue between the United States and China had been at a low point, but Biden and Xi appeared to embrace the possibility that they could align on some issues, such as climate change.

“I didn’t find him more confrontational or more conciliatory,” Biden said during a news conference following his meeting with Xi. “I found him the way he’s always been, direct and straightforward.”

Even while he seemed publicly warm with Sisi — “I could listen to you much longer,” Biden said when Sisi finished his introductory remarks — White House officials reported afterward that Biden had confronted Sisi directly on the case of Alaa Abdel Fattah, the British Egyptian political prisoner on a hunger and water strike in an Egyptian prison.

Biden’s meeting with Erdogan on Tuesday was not on his schedule, and reporters traveling with Biden learned of it through Turkish media reports. Biden expressed condolences for the deadly terrorist attack in Istanbul, according to a White House account of the meeting, and the two leaders also discussed close coordination on NATO issues and the war in Ukraine.

“President Biden expressed his appreciation to President Erdogan for his efforts to renew the Black Sea Grain Initiative, which they both agreed has been critical to improving global food security amid Russia’s war and that the Initiative must continue,” according to the White House.

Biden ended his global tour by showcasing perhaps the most important aspect of his foreign policy: his ability to keep Western countries aligned against Russia, even as the Ukraine war has created economic turmoil, food shortages and rising energy prices.

“We reaffirm our steadfast support for Ukraine and the Ukrainian people in the face of ongoing Russian aggression,” said the joint statement of NATO and the G-7, “as well as our continued readiness to hold Russia accountable for its brazen attacks on Ukrainian communities.”