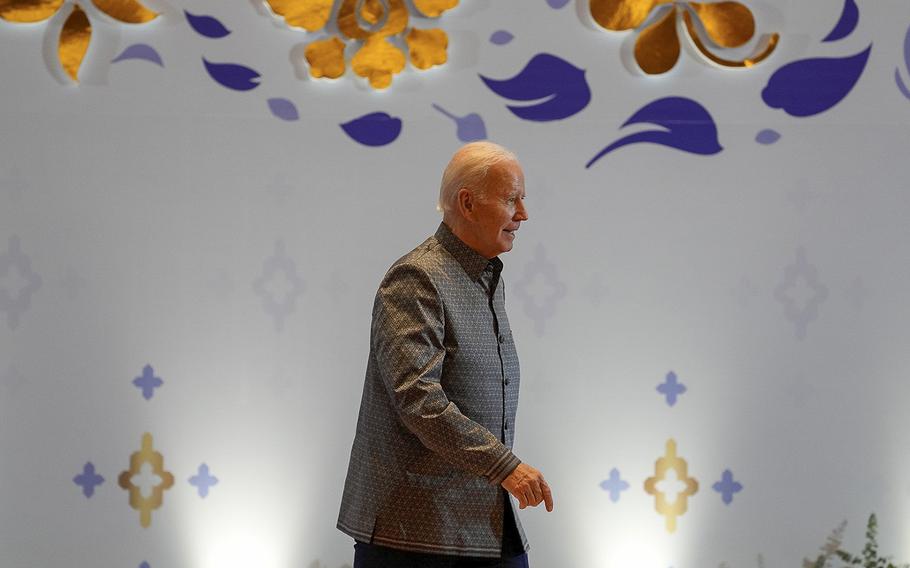 President Joe Biden walks on stage in Phnom Penh, Cambodia, where he was to meet leaders from the Association of Southeast Asian Nations on Saturday, Nov. 12, 2022. (Voice of America/Facebook)

PHNOM PENH, Cambodia — President Biden arrived here Saturday, the second stop of a week-long foreign trip seeking to reassure the world community that, no matter the political disruptions back home, the United States can still be a reliable global leader.

On the heels of a midterm election that gave him better-than-expected results - yet still could cost his party full control of Congress when final results are in, complicating his goals - he has used both appearances so far to press that theme and rally other nations.

During a speech in Egypt at the COP27 climate conference, Biden touted the United States as the global pacesetter in fighting climate change. And in Phnom Penh for a summit of southeast Asian nations, he immediately began trying to unite other nations to provide a counterweight to the rising economic and military threat that China poses.

One of the president's enduring challenges, however, has been to persuade his fellow leaders that former president Donald Trump's disruption of American foreign policy was an aberration, not a long-lasting shift. Hours into his presidency, Biden moved to rejoin the Paris climate accords that Trump had left, and after voters last week rendered a verdict on his first two years in office, he attempted to signal that his declaration of renewed American leadership was not in jeopardy.

Biden hopes to tamp down any notion that GOP hard-liners led by Trump, who may announce another presidential campaign within days, could gain power and torpedo any promises his administration makes on climate change. In addition, he's working to unify the world against Russian aggression and show that the American commitment to Ukraine's cause isn't in jeopardy despite possible Republican control of Congress.

As he began meetings with the Association of Southeast Asian Nations, he said he would address "the biggest issues of our time," including energy, climate, health and national security, as well as the impacts that nations here are feeling from Russia's war in Ukraine. He called ASEAN "the heart of my administration's Indo-Pacific strategy."

The president also said he hoped to "defend against the significant threats against rule-based order and threats to the rule of law," a seeming reference to China.

Before a meeting with Cambodian Prime Minister Hun Sen, Biden thanked Sen for his "clear condemnation" of Russia's invasion of Ukraine.

Still, even Biden wouldn't have had to look far for a reminder of the uncertainty presented by domestic politics: During some 20 hours of travel on Air Force One over the past few days, the television screens were tuned into CNN's blanket coverage of election results.

One of the big tests will come during the president's third and final stop Monday in Bali, when he meets with Chinese President Xi Jinping at the Group of 20 summit. White House officials said they do not expect significant progress on major issues and characterized the meeting as an effort to keep an open line of communication between the two countries. It will be the two leaders' first face-to-face meeting since Biden took office.

While some Democrats feared a midterm wipeout would weaken him on the world stage, top White House aides say the relatively successful outcome should be a boost. "The results from Tuesday show that the American people are sending him out to the world stage in a very strong position," Jake Sullivan, the national security adviser, told reporters ahead of the trip.

Biden has often noted that he has faced skepticism abroad after Trump's stormy tenure, citing a meeting of the leaders from the world's top seven economies early in his presidency. "I said, 'America is back,' " Biden recounted. "And one of the leaders looked at me and said, 'For how long?' "

"He wants to reassure people, but those reassurances are very hard based on the political situation we're in. And I think the Europeans are right to question how long we're back," said Samantha Gross, a fellow at the Brookings Institution who specializes in climate and energy.

Rosa Balfour, director of the think tank Carnegie Europe in Brussels, said Wednesday that while the topic of American reliability among European partners "remains a pertinent question," concerns were soothed a bit following the midterm election results.

"Everybody was very, very, very worried in European capitals," Balfour said. "The fact that it looks like there hasn't been a [Republican] wave . . . actually is very promising."

Yet some anxiety remains. And while the temperature has been lowered, she said, it's clear to those watching from afar that the fever has not broken. "Perhaps there hasn't been a sufficient sense of urgency that Europe needs to prepare for a hostile, maybe even more hostile than Trump, president in 2024," she said.

Biden's stop at the seaside resort of Sharm el-Sheikh on the Sinai Peninsula was meant to be a visible reminder of the importance his administration places on climate change. He had not initially planned to attend, but after a lengthy debate with advisers he reoriented his schedule.

Before his speech there, Biden met with Egyptian President Abdel Fatah El-Sisi, who is hosting the conference and has faced criticism for a dismal human rights record.

The Biden administration decided in September to withhold $130 million in security aid for Egypt for the second year because of a range of concerns on that issue, including arbitrary arrests, excessive pretrial detentions and torture by government jailers. Political and media freedoms have also been restricted under Sisi.

Biden and Sisi held an extensive discussion about human rights, according to White House advisers, and Biden raised specific cases and pressed for the release of pro-democracy activist Alaa Abdel Fattah.

"I can say emphatically that we believe that Alaa Abdel Fattah should be released," Sullivan told reporters on Air Force One following the stop in Egypt. He noted the "constant debate" over whether a diplomatic resolution is best pursued through "public pressure or private engagement" and then opted for the latter.

"In terms of talking through the specifics of our discussions with the Egyptians, I'd like to leave those behind closed doors for the moment," Sullivan said.

One of Biden's goals during his visit to ASEAN is to signal to key allies like Japan and South Korea that the United States is supporting them as China gains more economic power.

"It is certainly the case that the countries of the region do not want conflict or confrontation between the major powers," Sullivan said. "But they also very much want U.S. presence - forward-deployed presence in the region. And the reason they want that is because they see the United States as an important anchor of peace and stability."

"There is no doubt that the president comes in with a meaningful value proposition to the rest of the region that says, 'The United States is a resident Pacific power. We played a critical role in the past. We play a critical role today. And we have every intention of doing so in the future,' " Sullivan said.