TOKYO — For the 17 days in 2020 that he spent in a COVID-19 quarantine at his home near Yokosuka Naval Base, Japan, Sean Flanagan sat in front of a mirror, eating Rice Krispies Treats nonstop while talking to himself.

Two years later, Flanagan stood before a tightly packed audience in the heart of Tokyo, eliciting laughter with the comedy routine he polished in front of that mirror.

Flanagan, 34, a native of Boston and military spouse to Navy Lt. Cmdr. Simon Kwak, a foreign area officer at Yokosuka, where he works with foreign navies in the Indo-Pacific, said performing stand-up comedy helps him maintain his own identity.

“Even though it’s a package deal to the Navy, or whatever branch, as the family unit, the spouse is still their own individual person and you need your own identity,” Flanagan told Stars and Stripes in October.

Kwak, 36, of Summit, N.J., is very supportive of Flanagan’s burgeoning career in comedy, Flanagan said. The two were married in May in New York City.

“We are an adorably obnoxious couple, and Simon would be at every single show if I let him,” Flanagan said.

Kwak is his most important critic, Flanagan said. It’s no matter if 50 people don’t get the joke, if Kwak isn’t sure of it, Flanagan said he’s truly dismayed.

“It is definitely great to see him being able to pursue his passion as a career and finding that drive through comedy. And it is translatable to anywhere we get posted,” Kwak said.

“I think he is a natural at it. It is great that he has been able to find this creative outlet in Tokyo. “ 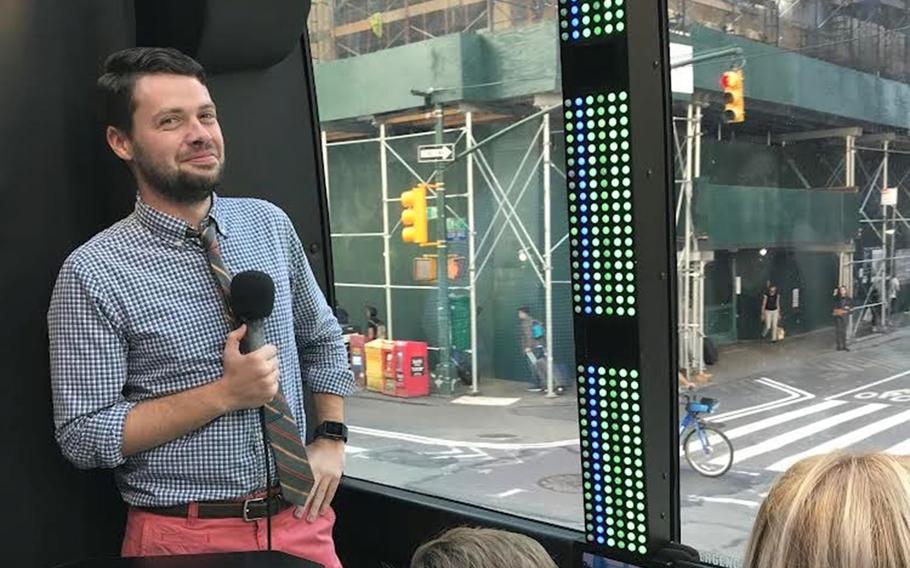 Sean Flanagan works as the host on The Ride, a comedy tour bus in New York City, in July 2022. (Simon Kwak)

Flanagan has performed since 2018, starting in New York City on a comedy tour bus for two years called The Ride. Passengers sat sideways facing a wall-sized window. At the bus stops, musicians, dancers and magicians performed on the sidewalk.

As the host, Flanagan performed a scripted routine, but always improvised for the sometimes-rowdy crowd. He speaks Japanese, and in a couple of weeks will attempt his first bilingual performance.

In Tokyo, his bids for audience engagement from the stage are sometimes met with silence.

“Literally, like, I’ll do a bit … ‘Do we have any straight people in the audience?’ Nobody raises their hand,” he said.

“Do we have any gay people in the audience? Nobody raises their hand. Oh, good … so you’re all bi. And you just kind of roll with it and let the audience know that some level of back-and-forth is good.”

Coming up with jokes happens in different ways for Flanagan. Some just pop into his head, so he always carries a notebook.

“The other day I was on a train and out of nowhere the idea came to me that isn’t the Cheesecake Factory menu in the Bible, like what are the similarities between those two things,” Flanagan said.

At other times, Flanagan will sit down for a writing session, which is usually drawn from personal experiences.

Flanagan says his comedy routine is partially storytelling; he likes to take people through a journey during his 5- to 20-minute sets. About 80% of his performance is scripted, with the remainder improvised.

Flanagan said he talks a lot about coming out late in life as LGBTQ and “joining the military” by way of marriage.

“One bit that I do talks about how if you really want to confuse Japanese people when you’re speaking Japanese try to tell them that you’re in a same-sex relationship, because they just think you’ve slipped the genders accidentally,” Flanagan said.

Flanagan performs three or four times a week at the Tokyo Comedy Bar in Shibuya, where he first went on stage in June. He’s usually on stage on the big nights, 7 p.m. Friday and 8 p.m. Saturday.

“One of his superpowers I have seen is the fact that he can talk to different audiences,” said BJ Fox, founder of the Tokyo Comedy Bar.

“He can speak to an international audience, and he speaks good enough Japanese to be like ‘I can skitch into this gig,’ in terms of his audience.”

Fox, 41, originally of London, said the Tokyo Comedy Bar attracts an audience people from nearby bases like Yokosuka, Yokota Air Base and Atsugi Naval Air Facility but even from bases in Okinawa.

Flanagan enjoys playing to the Department of Defense crowd.

“I love when we have DOD members in the audience, because I can tell my DOD-specific jokes,” Flanagan said.

“Personally, I don’t like the term dependent. I mean the only things I rely on my partner for are health care, an income and keeping a roof over our heads — I just don’t think that’s that much.”

Suddenly, Flanagan said, he has enough success to justify calling himself a comedian.

“It feels weird to now introduce myself and say ‘I am a comedian,’” he said.

“It took a long time to give myself permission to say that. And now I’ll just confidently say, ‘You know, I’m a stand-up comedian in Tokyo.’”