Moments of doubt and shame: One man’s struggle to build the Vietnam memorial wall 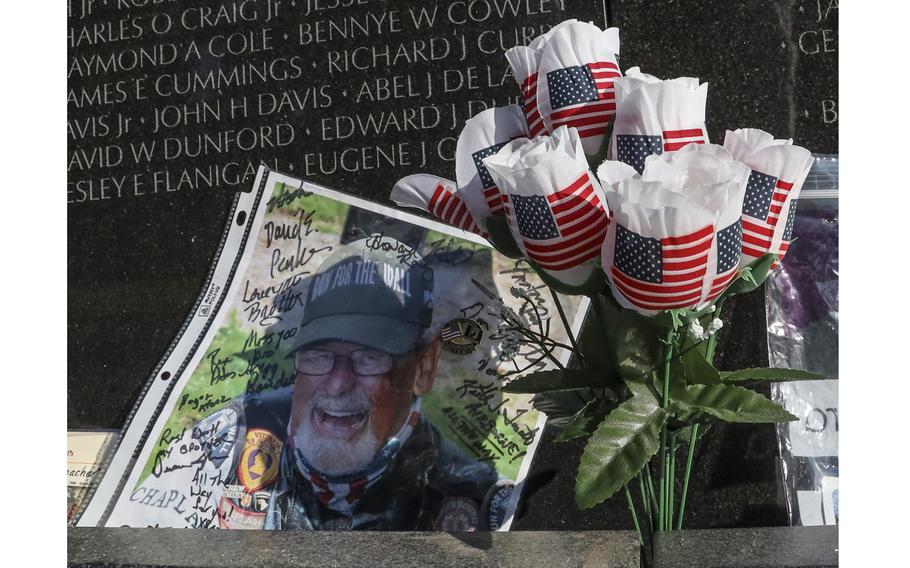 Memorial Day at the Vietnam Veterans Memorial in Washington, D.C., Monday, May 30, 2022. (Joe Gromelski/Special to Stars and Stripes)

Robert Doubek’s role in the contentious three-year quest to construct a memorial honoring Vietnam War veterans near the National Mall began in 1979 with a voice in the back of a room.

By the time the Vietnam Veterans Memorial was dedicated on Nov. 13, 1982, Doubek, the project director, was burned out. Conflicts with the design’s opponents and delays in permit approval left him feeling as if he were shouldering the weight of the monument’s black granite wall engraved with the names of all who died during the decade-long war.

“I remember the day of the dedication,” Doubek, 78, told Stars and Stripes by phone on Oct. 28. “I walked away, and I said to myself, I don’t care if anybody likes it. If they don’t like it, let ‘em go build their own.”

Forty years later, the strife that surrounded the memorial’s design and construction has all but disappeared.

“It’s become a cultural icon and had a profound effect on the soul of our nation,” Doubek said.

“I think it played a role in the cultural shifts our country has made in separating the war from the warrior.”

Doubek had been an Air Force intelligence officer, assigned to interrogating North Vietnamese prisoners of war in Danang from December 1968 to late November 1969.

By the end of his tour, Doubek was skeptical that America’s intervention would succeed because of the fortitude he had seen in prisoners, some of whom had been holding out for years in the foothills and mountains.

One prisoner told him each fighter subsisted on just over a pound of rice a day, with the occasional vegetable or fish. “So, my sense was that they could wait us out,” he said.

He left the Air Force in July 1971 and graduated from law school in 1974 at age 30. The following year Saigon fell to the North Vietnamese. 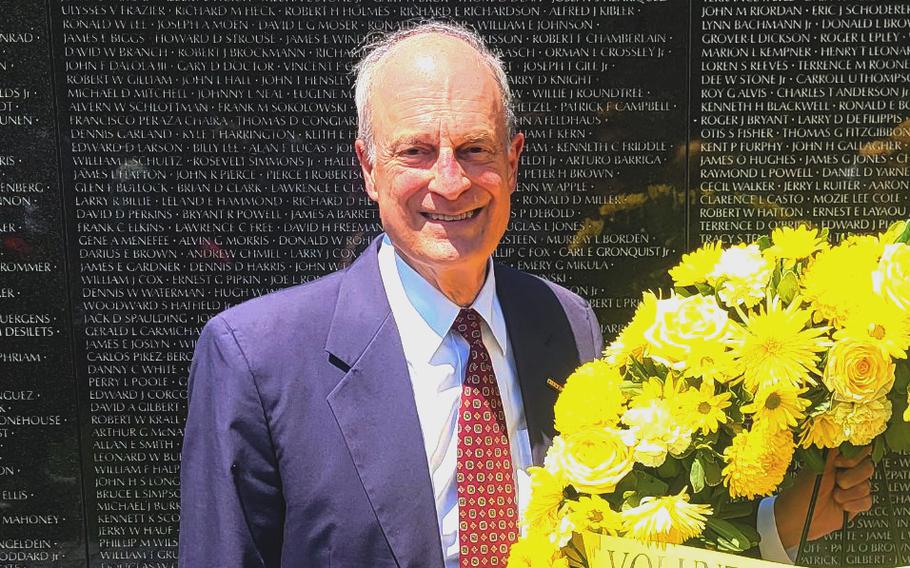 Robert Doubek at the Vietnam Veterans Memorial, Washington, D.C., with a wreath placed on the 40th anniversary of the Volunteer Guides, a program Doubek founded, on May 31, 2022. (Robert Doubek via Facebook) 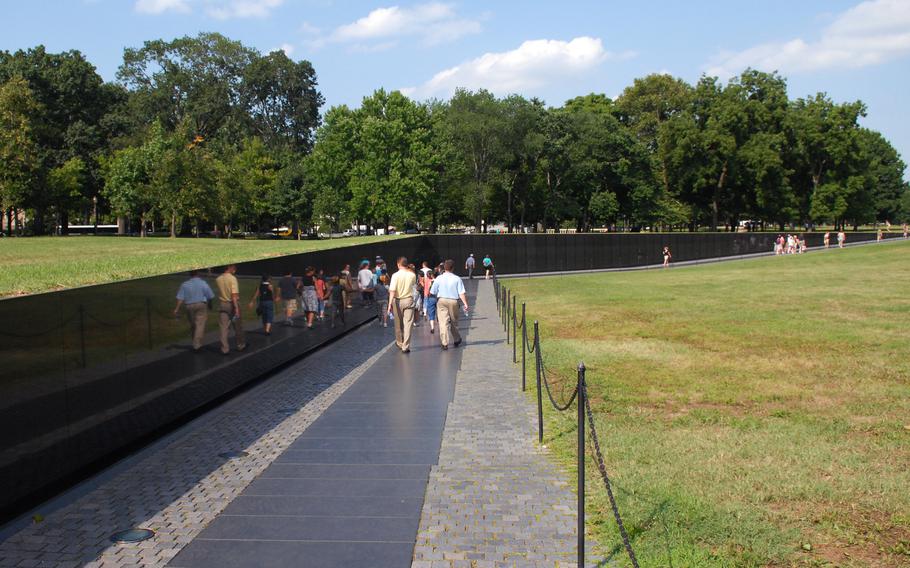 ‘What about a memorial?’

American involvement in South Vietnam slowly lost public support in the late 1960s, and many were glad to leave the failed war behind. Some Vietnam veterans felt they too were left behind.

“I began to hear that Vietnam veterans were having problems readjusting,” Doubek recalled of the mid-1970s. “I wasn’t getting much satisfaction out of being a lawyer so I thought maybe I could help some guys with bad-conduct discharges or something.”

He began providing legal assistance to members of the Vietnam Veterans of America in their pursuit for better benefits for treating post-traumatic stress.

Doubek and a cofounder of VVA decided to attend a meeting at the National Conference of Mayors in Washington, D.C., in April 1979, which roughly coincided with Vietnam Veterans Day instituted five years earlier.

“We thought maybe we could use that as a hook to get publicity for veterans’ needs,” Doubek said. “And while I was at the meeting, this guy who’d been sitting all alone in the back stood up and he said, ‘What about a memorial?’”

The idea and the voice belonged to Jan Scruggs, a decorated Army rifleman, who became the driving force behind the memorial. But on that day, fellow attendees dismissed the notion, believing that better benefits were what was needed, Doubek said.

“But it resonated with me,” he recalled.

“In law school and in the social atmosphere of Washington, D.C, it was almost like a negative thing to be a Vietnam veteran,” he said. “So, I thought what people needed was recognition. There needs to be recognition of the service.”

Doubek approached Scruggs and helped him set up a nonprofit corporation, Vietnam Veterans Memorial Fund, which could be used as a vehicle for fundraising and contracting.

As they embarked on the effort, Doubek said he envisioned “a very simple marker.”

It would become anything but that.

Congress authorized a two-acre site next to the Lincoln Memorial in July 1980 for its construction.

The Memorial Fund chose the design through a national competition that garnered 1,421 designs by the March 30, 1981, deadline.

In a 2019 interview with Army Times, Scruggs described most of the entries as “architecturally complex.”

“One was a giant flag where you would walk down the stripes and all names would be on big lily pads, and they would be continually read over a loudspeaker system,” Scruggs said. “There was the 400-foot-tall Army helmet with a bullet hole in the center and all the names on dog tags. One had a helicopter on a pole, crashing down, with all the names around it.”

The selection jury, however, chose a simple design by Maya Lin, who at the time was still an undergraduate at Yale University.

Her design, a wall of black granite with inscribed names, bereft of statues and ornamentation, met almost immediate opposition from those who envisioned a more traditional monument in the style of the Iwo Jima flag-raising depicted in the U.S. Marine Corps War Memorial.

A leading critic was Texas billionaire Ross Perot, a Navy veteran who had initially supported the effort with a donation of $171,000.

Perot described the proposed memorial to reporters as “a tombstone” and that many veterans regarded it as “an apology, not a memorial.”

Some called it a “black gash of shame,” Doubek said.

“The thing completely blew out of proportion, insofar as the Wall became a Rorschach inkblot test for unresolved feelings about the war,” Scruggs told Smithsonian Magazine in a 2002 interview.

“Let’s get this done”

Political opposition slowed the required construction approval by the U.S. Department of Interior, said Doubek, who hit his lowest point on March 10, 1982, his birthday.

“We were trying to get the building permit out of the Interior Secretary, James T. Watt,” he said.

“That was the only day I lost faith,” he said.

“Frankly, I was ashamed of myself,” Doubek said.

Five days later he picked up the building permit from the National Park Service and called Scruggs from a payphone.

“I got the damn permit,” Doubek recalled telling him. “Call the construction company. Call the architect. Let’s get it done.”

Doubek, fearing a lawsuit might delay the project, insisted the contractor begin immediately tearing up the sidewalk and grass at the site.

“Because under the law, an injunction preserves the status quo,” he said. “We still had Perot, a billionaire, sitting out there with all the money in the world to hire a lawyer. He could have at any point come in and tried to screw us again. So we wanted the status quo to be ‘under construction.’”

Under a compromise between the Vietnam Veterans Memorial Fund and critics of the design, a statue of three warfighters and a flagpole were erected and dedicated in 1984 near the entry to the site.

Doubek recalled the wall’s dedication as “hushed and quiet, and extremely reverent.”

“The atmosphere in front of the wall was like being in a cathedral,” he said. “I think it was sort of like an epiphany for people to go there. People just couldn’t stop themselves from going to the wall and touching the wall, looking for names.”

The sight of family members, friends and battlefield comrades searching for names, sometimes tracing them on paper, has over the decades become as iconic as the wall itself.

With the passing of years, Doubek has come to feel that the acrimony around the project – which had so ground down his spirit by the time it was dedicated – had probably helped get it over the finish line.

“I remember when all of the rancor began to happen over the design, we got more publicity and our fundraising actually started to increase,” he said. “Maybe it was cathartic for the country to go through this debate.”