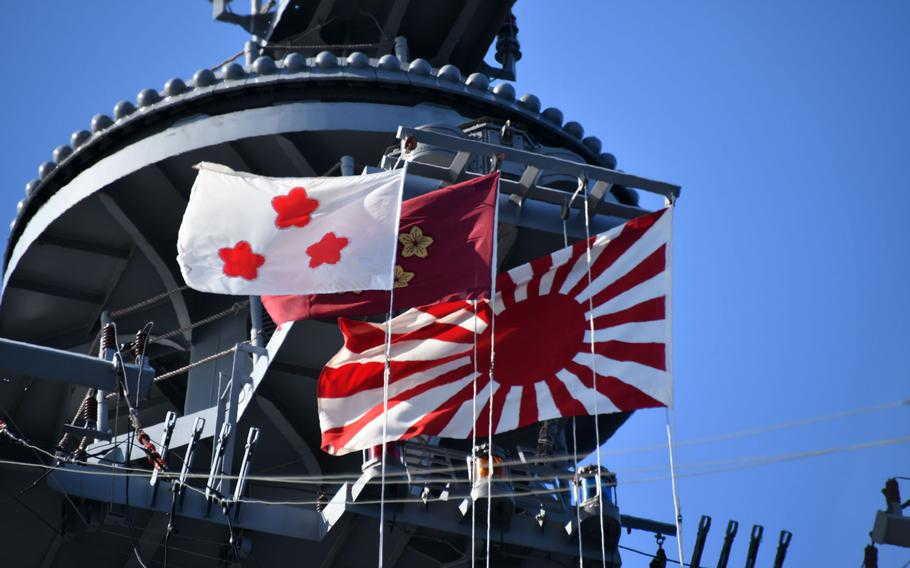 A salute South Korean sailors rendered to the “rising sun” flag of the Japan Maritime Self-Defense Force at a fleet review touched off an exchange Monday in Seoul between the nation’s defense minister and an opposition lawmaker.

South Korea’s navy attended the Japan International Fleet Review on Sunday in Sagami Bay near Tokyo for the first time since 2015. Eleven other countries, including the United States, Australia, the United Kingdom, Canada and India, also sent warships to the ceremony.

Saluting the rising sun flag is equivalent to paying respects to a war criminal, said Jeon Yonngi, a Democratic Party member, during a National Assembly hearing.

The flag for some recalls Japan’s colonization of Korea from 1910 to 1945 and its military aggression during World War II, when the Japanese Imperial Navy flew the flag. The Japan Maritime Self-Defense Force has flown the same banner for more than 50 years, according to Japan’s Ministry of Foreign Affairs.

South Korea in 2019 asked the International Olympic Committee to ban the flag at the Tokyo Olympics, suggesting that it recalls for Asians the “scars and pain” of World War II as the swastika does for Europeans, according to a July 23, 2021, report in the Mainchi newspaper.

Jeon at the hearing broadcast by the assembly asked National Defense Minister Lee Jong-sup whether South Korean sailors should have saluted the flag as it passed on a Japanese vessel during the fleet review.

The sailors were saluting the host country warship, “in accordance with international practices,” Lee replied. “Thus, I would like to say it is not that the [South Korean navy] made a salute toward the rising sun flag.”

“Should we recognize something if something is internationally accepted,” he asked Lee. “We were humiliated under Japanese imperialism for 36 years, when Tokyo was saying it will conquer the world while hoisting this flag.”

The rising sun flag dates to 1870, according to a 2019 newsletter from Japan’s National Institute for Defense Studies.

Japan’s Ministry of Foreign Affairs, on a website dedicated to the flag as a symbol of Japanese culture, states that the flag is not an “expression of political or discriminatory assertions.”

Japan “will continue to explain at every opportunity its view that the display of the Rising Sun Flag is not political promotion to the international community, including [South Korea],” the website states.

South Korean President Yoon Suk Yeol has pledged to work closer with Japan in light of North Korea’s continued threats toward the region. Since Yoon’s inauguration in May, South Korean forces have conducted several joint military exercises with their Japanese counterparts, including an anti-submarine warfare drill in the East Sea, also known as the Sea of Japan, in September.