Volunteer army takes the field at Special Olympics in Japan 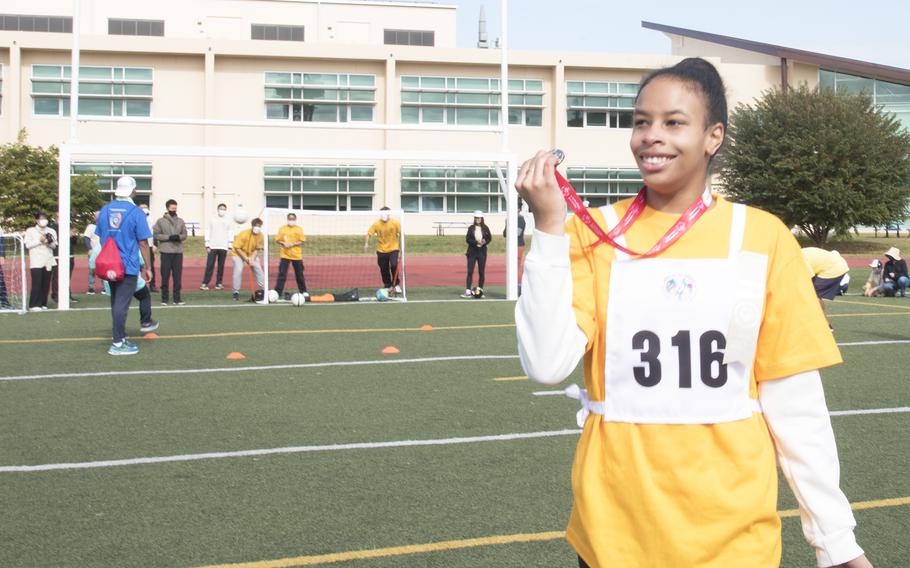 YOKOTA AIR BASE, Japan – At the Special Olympics event at this airlift hub in western Tokyo, more than 17 volunteers turned up for every Olympian from the U.S. military and Japanese communities in the Tokyo area.

That’s about 900 volunteers behind 52 young American and Japanese athletes competing at the Yokota High School and elsewhere at Yokota Air Base on Saturday.

“This event showcases the dedication of this community, volunteers, families and, most importantly, the athletes,” Col. Andrew L. Roddan, commander of the 374th Airlift Wing, said during the 8:20 a.m. opening ceremony for the 43rd Kanto Plains Special Olympics.

Many Japanese athletes, precluded from attending the event the past two years due to the COVID-19 pandemic, were back in action. The event itself was canceled in 2020. 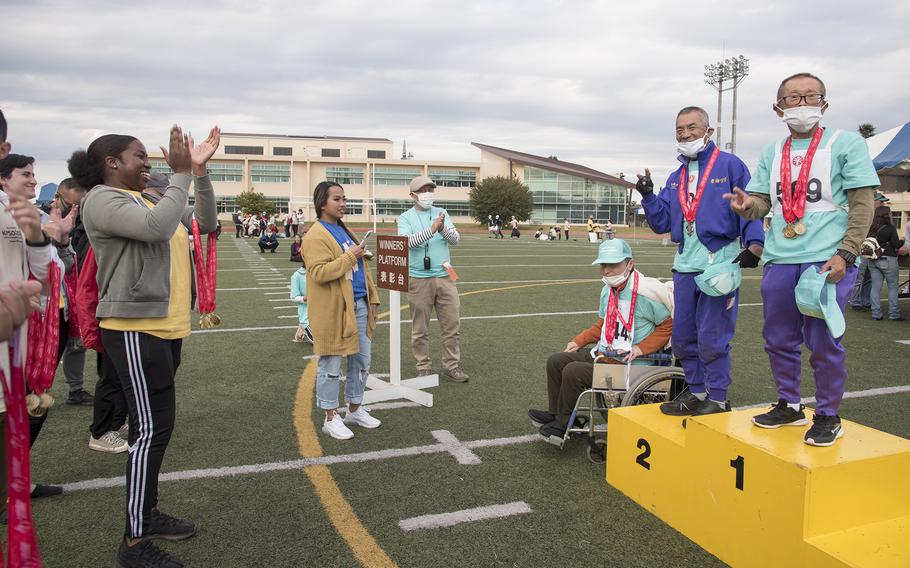 Air Force Staff Sgt. Bevonia Williams, 28, of Harlem, N.Y., cheers on the winner athletes during the medal ceremony during the Kanto Plains Special Olympics at Yokota Air Base, Japan, on Nov. 5, 2022. (Kelly Agee/Stars and Stripes) 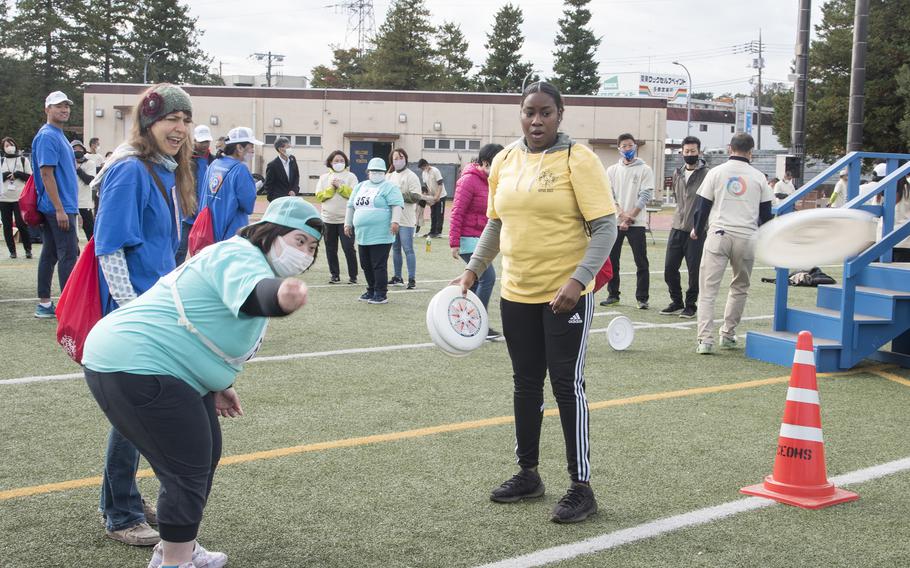 Jessica McKinstry, 23, of Tokyo, throws a disk during the Kanto Plains Special Olympics at Yokota Air Base, Japan, on Nov. 5, 2022. (Kelly Agee/Stars and Stripes)

Kaori Sugimoto, of Tokyo, said her daughter Nanami Sugimoto, who is in elementary school, was taking part in her fourth Special Olympics.

“My daughter likes coming to the events, especially participating in basketball,” Sugimoto said.

The day’s events included soccer, basketball, a 50-meter dash, disc throw and soccer shoot at the high school; swimming at the Yokota Natatorium; and bowling at the base lanes.

U.S. Army Staff Sgt. Lucas Paasch, 29, of Portland, Ore., was a volunteer coordinator this year, his first as a volunteer for the Special Olympics.

“I just thought it’d be a great cause,” Paasch told Stars and Stripes at the event. “I saw the opportunity and I wanted to be part of something bigger.”

A lot of preparation went into the event, he said.

“I made a lot of phone calls to different bases and schools to recruit teachers, students and military member volunteers for this event,” Paasch said. “I also helped book the facilities and ensure they had enough materials including T-shirts and hats.”

Volunteers at the event cheered the athletes, grilled food, wiped down the sporting equipment and acted as buddies to support and guide the athletes in their individual events.

One buddy, Staff. Sgt. Dennis Dexter, 39, of Estacada, Ore., of the 374th Maintenance Squadron at Yokota, was another first-time Special Olympic volunteer.

“I see it every year and everybody looks like they are out here having a great time,” Dexter told Stars and Stripes. “So, I thought might as well join in.”

Dexter escorted athlete Yamato Hashimoto to every event and cheered him on. Hashimoto participated in softball, disc throw and the award ceremony at the end. Dexter was most excited about Hashimoto’s chances in the softball throw.

“I think he might have a pretty good arm,” Dexter said.

Another volunteer, Staff Sgt. Bevonia Williams, 28, of Harlem, N.Y., with the 374th Medical Group at Yokota, helped with the disc throw by handing the athletes their discs and helping score the event. She also placed the medals onto the winning athletes at the medal ceremony.

Athlete Jessica McKinstry, 23, of Tokyo, competed in bowling, softball throw, disc throw and soccer. Her mother, Katsumi McKinstry, said they have been taking part in the event for years.

Daisy Elliot, daughter of Cynthia and Stacey Elliot, Defense Department civilian employees, has competed every year since 2019, when they arrived at Yokota.

“We love this event,” Stacey Elliot, of Dallas, said. “It’s a chance for Daisy to come out and compete, have fun and it’s a great opportunity for Daisy to meet other athletes, the other Special Olympians. We absolutely love it.”

Daisy Elliot, 16, a student at Yokota High School, is diagnosed with autism, her father said.

“It’s very difficult for her to communicate with our peer group and meet friends,” her mother said. “But at this event she is like a superstar.”

The running events are Daisy Elliot’s favorites, and she placed second in the 50-meter dash, but she also competed in soccer, basketball and the disc throw, Stacey Elliot said.

“These events are really good for her,” Stacey said. “She feels the sense of reward when she competes. Those are some of the things that the therapists, you know, can’t really teach because when you’re doing the therapy, you don’t have a crowd around you cheering you. So, she kind of feeds off of that and it encourages her so it’s really a good learning method for her.”