‘When you fall, you just get back up’: DODEA student in Japan doubles as competitive figure skater YOKOHAMA, Japan — Among a dozen figure skating pupils on the ice at the Kose Shin Yokohama Skate Center on Thursday nights is a 9-year-old girl from Naval Air Facility Atsugi who has been skating for almost as long as she could walk.

Off the ice, Ava Jade Gurski, of Goodyear, Ariz., is an outgoing, unreserved and amiable student at NAF Atsugi’s Shirley Lanham Elementary School. On the ice, however, she is riveted, concentrated and quiet as she sharpens her skills. That attitude earned her 15 medals in 15 competitions since she began skating at age 3.

Her biggest successes include four first place wins in U.S.-based competitions in 2019, including the Las Vegas Silver State Open and the 2019 Autumn Classic, her mom, Jennifer Gurski, told Stars and Stripes on Oct. 22. 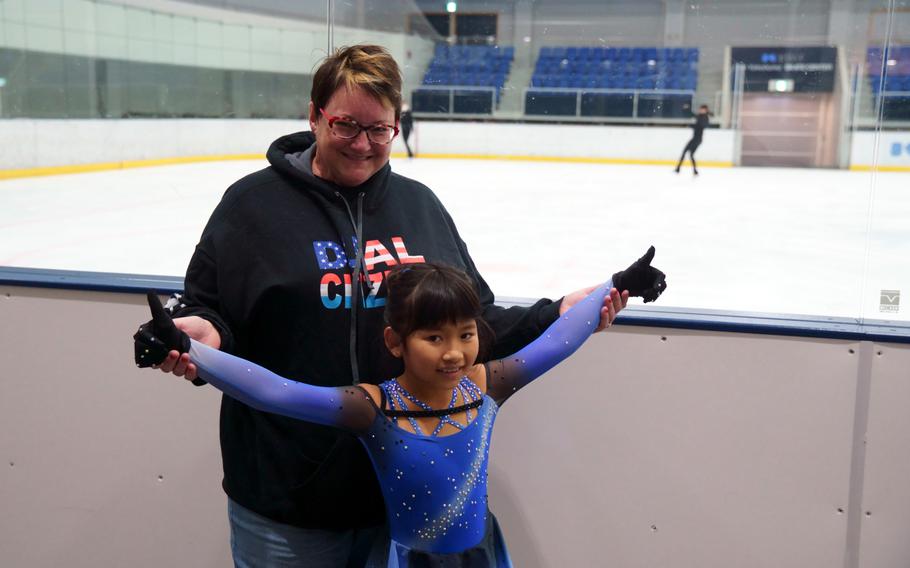 Since moving with her mother to Japan in 2020, Ava Jade said she’s faced much more serious competition and must work harder to place in Japanese events. In two competitions in Yokohama so far, she placed 14th in August and seventh in October.

Her next competition will be in April at the Kose Shin Yokohama Skate Center, Jennifer Gurski said.

Ava Jade’s coach, Nozomi Watanabe, 51, of Tokyo, is an Olympic skater who placed 15th in the 2006 Winter Games in Turin, Italy. She acknowledged the differences between Japanese and American skating programs.

Jennifer Gurski, 53, a supervisor for NAF Atsugi’s Counseling Advocacy Program, and her husband, Wade Gurski, 49, a Marine Corps veteran and private contractor working with the Defense Department in Kuwait, both said Ava Jade tried gymnastics before moving to ice skating at age 3. She found that she has a natural talent for the sport.

“She just loved it, and it stuck,” Jennifer Gurski said.

Wade Gurski said his daughter is the best skater he’s ever seen on the ice. He gets to Japan only a few weeks every year but each time he returns he sees Ava Jade improving noticeably.

“She always just seemed flawless to me,” he told Stars and Stripes by phone in September. “I can’t see any mistakes; I think she does everything perfectly. Watching her just makes me so proud.”

Ava Jade said she plans to continue skating for the foreseeable future, and she’s working on mastering several types of jumps and spins. She also wants to encourage other kids to give the sport a try.

“Skating is really fun,” she said.