Chinese rocket tumbles into Pacific Ocean after days in space 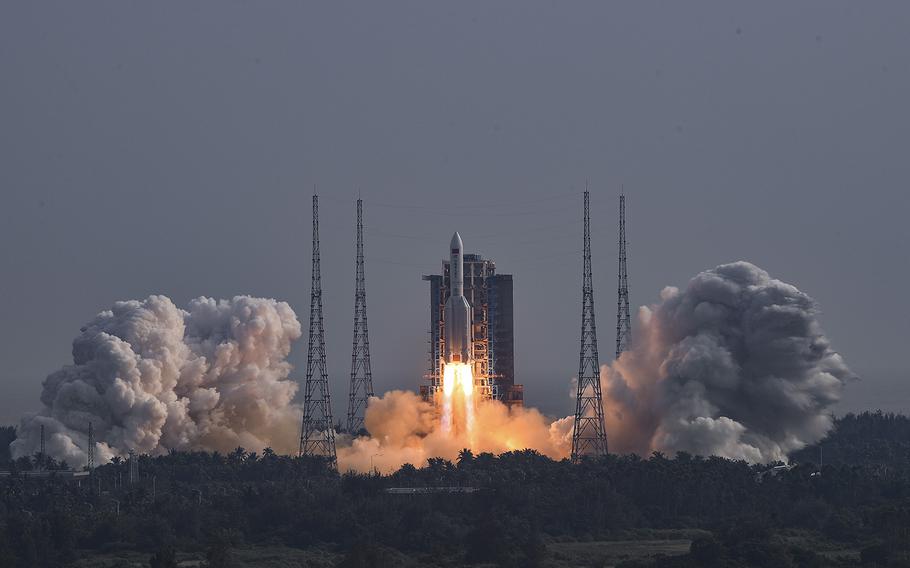 For the fourth time in less than three years, a massive Chinese rocket stage reentered the Earth's atmosphere, this time over the Pacific Ocean.

There were no initial reports of damage of injuries from the Chinese Long March-5B rocket stage when it came down shortly after 6 a.m. Friday.

But its return to Earth highlighted a tension among space faring nations over China's practice of letting its spent rockets tumble back to Earth after days in orbit. While the chances are low of any one person getting hit by the returning space debris, several of the tracks the rocket possibly could have taken passed over a large swath of the Earth's populated areas.

NASA Administrator Bill Nelson has repeatedly condemned China for the practice. In a statement Friday morning, he said: "It is critical that all spacefaring nations are responsible and transparent in their space activities and follow established best practices, especially, for the uncontrolled reentry of a large rocket body debris - debris that could very well result in major damage or loss of life."

China is alone among space-faring nations in allowing the unplanned return of its boosters, instead of ditching them at sea, as most others do, or returning them to a soft landing, like Space X.

"The technology exists to prevent this," said Ted Muelhaupt, a consultant in the chief engineer's office at the Aerospace Corporation, a nonprofit that drew possible tracks for the rocket's return. The rest of the world doesn't "deliberately launch things this big and intend them to fall wherever. We haven't done that for 50 years."

The booster of China's massive Long March-5B rocket stays aloft for several days after launch and then comes crashing back to Earth, tumbling out of control. This one was launched Monday, carrying the final module of the Tiangong space station that China is assembling in Earth's orbit.

As of Wednesday, the Aerospace Corporation's calculations had the stage possibly landing over areas of land where 88 percent of the world's population lives. And so the possibility of casualties, Muelhaupt said, was between one in 230 to one in 1,000. That risk far exceeds the internationally recognized standard that says a reentering space object should not have greater than a one in 10,000 chance of causing injury.

The Chinese rocket stage is massive - weighing 22 metric tons and measuring as long as a pair of 53-foot semitrailers parked end to end, Muelhaupt said. He estimated that between 10 and 40 percent of the booster would survive reentry.

After a launch of the Long March-5B in May 2020, a piece of the rocket landed in the Ivory Coast in Africa. In July, debris fell in Indonesia and Malaysia. Chinese Long March rockets are the third, fourth, fifth and sixth largest uncontrolled re-entries ever into Earth's atmosphere, he said.

NASA has gone to great lengths to ensure the expendable core stage of its Space Launch System rocket falls into the Atlantic far from people, Jim Free, NASA's associate administrator for exploration systems development, told reporters Thursday. "We have very clear direction to safely dispose of what we put in orbit," he said. "That is core to what NASA does."

Russian boosters fall in designated areas of Kazakhstan and Russia that are unpopulated.

Getting other nations to behave responsibly, however, remains a problem. While the nations launching objects to space are liable if they cause injury or damage on the ground, there are no laws that prohibit nations from letting large pieces of debris crash to Earth.

"The reality is that there aren't any real laws or treaties internationally that govern what you're allowed to do in terms of reentry," said Marlon Sorge, a technical fellow at the Aerospace Corporation. "So, there isn't really a direct legal way to control what's going on an international level."

In other words, there are few, if any, rules to the road that govern space. Instead, there are efforts underway by the Aerospace Corporation, and others to create standards that countries with space programs would adhere to.

"While it's really difficult, we believe that establishing an international consensus on these norms for behavior involving space is absolutely a worthy and important endeavor," said Lael Woods, a space traffic management expert at the Aerospace Corporation.

Meantime, space is littered with all sorts of debris, including upper stages from rockets that can stay in orbit for months, even years. While many burn up when they fall through the atmosphere, some survive, at least in part.

Earlier this year, for example, a part of a SpaceX's booster landed in Australia, where it was found by a sheep farmer.

"Pretty frightening, actually," Mick Miners, told the New York Times. "I was quite surprised. It's not something you see every day on a sheep farm."