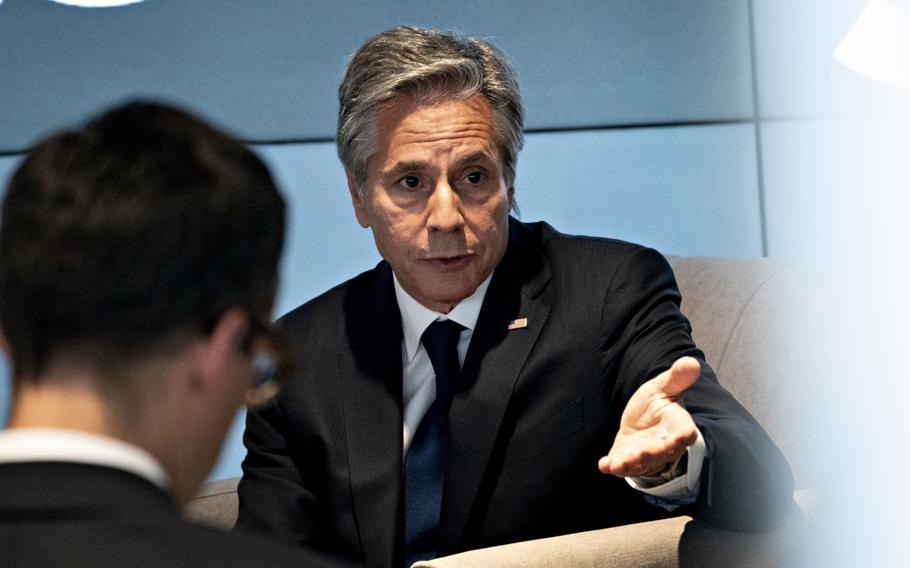 Chinese Foreign Minister Wang Yi criticized U.S. export curbs in a call with U.S. Secretary of State Antony Blinken, underscoring the tensions between the nations before a possible face-to-face meeting of their leaders.

"The U.S. side should stop its containment and suppression of China and not create new obstacles to bilateral relations," said Wang, according to a statement Monday from the Foreign Ministry in Beijing. "The U.S. side introduced new export controls against China, restricting investments in China, seriously violating free-trade principles and seriously harming China's legitimate rights and interests, which must be corrected."

Wang and Blinken discussed the need to maintain an open dialogue and responsibly manage their relationship, State Department spokesperson Ned Price said in a separate statement after the call. Blinken raised concerns about Russia's war against Ukraine and the threats it poses to global security and economic stability, Price said, and they also discussed the instability in Haiti.

The call was the first between the two men since Wang's promotion to the Communist Party's 24-member Politburo earlier this month, making him China's top-ranked diplomat. Both sides are preparing for a possible meeting between President Joe Biden and China's Xi Jinping next month, when world leaders gather at a Group of 20 meeting in Bali, Indonesia.

Wang's comments about export controls were an apparent reference to Washington's move earlier this month to restrict Chinese access to chipmaking technology. They signal that the issue will likely be an area of contention if and when Biden holds his first sit-down as president with the Chinese leader.

The U.S. Commerce Department's sweeping regulations limit the sale of semiconductors and chip-making equipment to Chinese customers, striking at the foundation of the country's efforts to build its own chip industry. The move could undercut Beijing's efforts to develop wide swaths of its economy, including semiconductors, supercomputers, surveillance systems and advanced weapons.

Nicholas Burns, the U.S. ambassador to China, also met with Wang on Friday, almost eight months after the envoy arrived in Beijing. Last week, Xi said in a letter to a New York-based group supporting stronger bilateral ties that Beijing was willing to find a way to get along with Washington.

The comments from Xi struck a conciliatory tone after a Communist Party congress during which he secured a norm-breaking third term in power and promised China would stand its ground in a more hostile world.