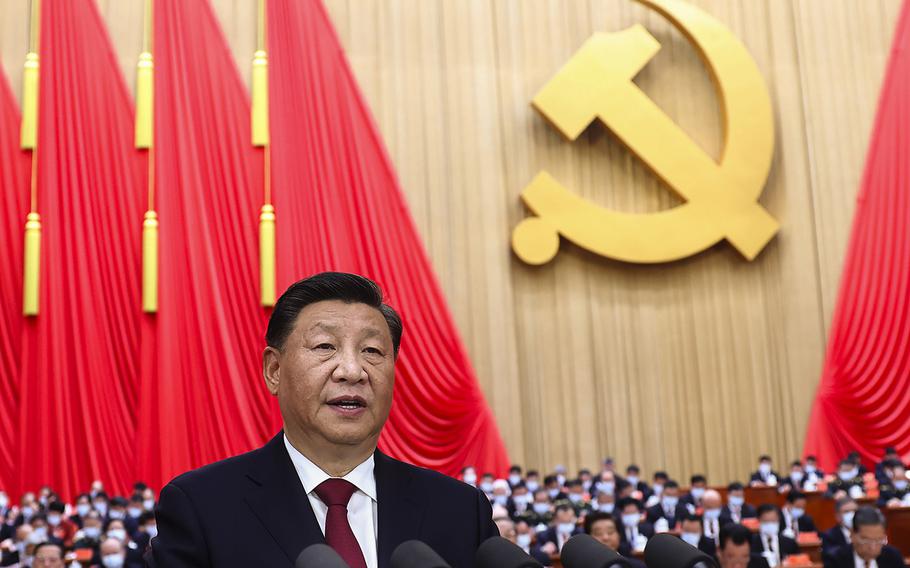 The most-watched film in China this week, about daring officials who save Chinese citizens trapped overseas by war, neatly matches a central theme of leader Xi Jinping's agenda at the twice-a-decade Communist Party meeting in Beijing - that the world is a dangerous place and China needs to protect itself.

"Home Coming," the latest in a string of Chinese movies to ride nationalist themes to box office success, follows a street-smart diplomat who will stop at nothing to complete his mission. Border officials are bribed. Hostages are freed by a game of Russian roulette. The day is saved.

While set in a fictional North African country, the plot is based on real events and reflects Xi's obsession with what he sees as mounting security risks that could undermine the safety of China and the rule of the party.

During the 20th National Party Congress, which ends Saturday, Xi has emphasized the party's ambition to assume global leadership as the head of a socialist superpower depends on absolute security as much as economic growth. But the goal of building a world safe for autocracy is putting China on a collision course with other nations.

Central to Xi's newly expounded idea of "Chinese-style modernization" - which excludes multiparty democracy, direct leadership elections or legal guarantees of individual freedoms - is an effort to guard against risks at home and abroad that could disrupt the country's rise.

In a congress report released this week, the word "security" appears 91 times, up from 55 mentions in 2017 and 36 in 2012. Xi's "comprehensive national security concept" - a slogan urging the active detection and management of threats in all areas of policymaking - has its own section for the first time. The "global security initiative" he announced in April was also included.

As China extends its reach through projects like the Belt and Road initiatives, its international security presence continues to expand. A recent policing agreement with the Solomon Islands, for example, was defended as necessary to protect its interests. But human rights groups fear repression will reach far beyond China's borders.

Xi's global security initiative, while still in its infancy, is likely to become a test for the country's willingness to compromise with the existing global security order. "This is Beijing going from a negative agenda - 'we don't like the current order, which is Western-dominated and imposed on us' - to China actually launching something like an alternative vision," said Helena Legarda, lead analyst at the Mercator Institute for China Studies in Berlin.

When Xi talks about a "comprehensive" vision of national security, he means it. The concept covers 16 different areas, including polar, space and deep-sea security. It pops up throughout Chinese policymaking. Strict adherence to a "zero-covid" policy, for instance, is all about ensuring people's security.

The darker outlook of the world in Xi's report stems largely from accelerated competition with the United States under the Biden administration, said Amanda Hsiao, senior China analyst at the Crisis Group think tank in Brussels. From the party's perspective, the shift in the international balance of power as U.S. influence wanes is a critical moment. "The leadership understands their management of this period as determinative of the pace and trajectory of China's rise," Hsiao said.

Sections of the report signal a subtle but significant shift that analysts say reflects Xi's desire to make everything about security.

In his speech to the congress last Sunday, he omitted reference to a "strategic opportunity period," the term that for the past two decades has characterized China's strategy of focusing on trade and economic development. But his report introduced a new phrase - "ensure both development and security" - that signals how the two areas are now on equal footing in party doctrine.

"Development is still extremely important in this formulation," said Howard Wang, an analyst at Rand Corp. "It is just not a separate, more important policy priority than China's security interests."

China's security presence is increasingly visible around the globe. Research released Monday by the Center for American Progress, a liberal-leaning think tank, found evidence of increased overseas activities by the Public Security Ministry under Xi, with 60 percent of publicly disclosed bilateral police meetings and 73 of 77 capacity-building sessions between 1995 and 2021 taking place since he took office a decade ago.

The Chinese Communist Party "wants to make the international order safer for itself to exist, and from Beijing's perspective, having the [public security ministry] play a more active role abroad is one of the key pillars in ensuring safety for the regime," report author Jordan Link noted.

As China's focus on security grows, so, too, have democratic concerns. Recent Pew Research surveys in 19 mostly industrialized countries found that nearly three-quarters of respondents described Chinese military power as a serious problem. A pugnacious pivot in Chinese diplomacy has undermined its constant promises of peace. Formerly restrained Chinese diplomats have earned themselves the nickname "wolf warriors" - a nod to another patriotic action blockbuster - for their new habit of coming out swinging both figuratively and literally in response to criticism.

This year, China's ambassador to Sweden said in an interview that while Beijing rewards friends, "for our enemies, we have shotguns." This week, Chinese Consul General Zheng Xiyuan and other consular staff in Manchester, England, confronted demonstrators on the street outside their office, kicked down posters and dragged a protester through the gates to beat him. Zheng later told Sky News that he was acting out of "duty."

Some scholars in China have warned about taking the security-first mind-set too far. In a study published in May for the Chinese Academy of Social Sciences, researchers Zhang Chao and Wu Baiyi cautioned that "when a state pursues absolute security and extends the concept of security without restraint," it can waste resources, boost conservatism in domestic politics and discourage international exchanges.

China's more aggressive foreign policy under Xi can actually look like he is mismanaging this supposedly critical moment. The reputational costs of not condemning Russia's invasion of Ukraine seem counterproductive considering the Chinese economy's continued reliance on Western technology and trade.

Yet given Xi's main focus of ensuring regime security, good relations with liberal democracies are expendable.

"Allowing Putin's regime to fall would also set a dangerous precedent" for the party, said Legarda, the China analyst in Berlin. "Beijing is convinced that the West - and the U.S. in particular - is intent on containing China."