As China's Xi extends his rule, his predecessor forcibly led away 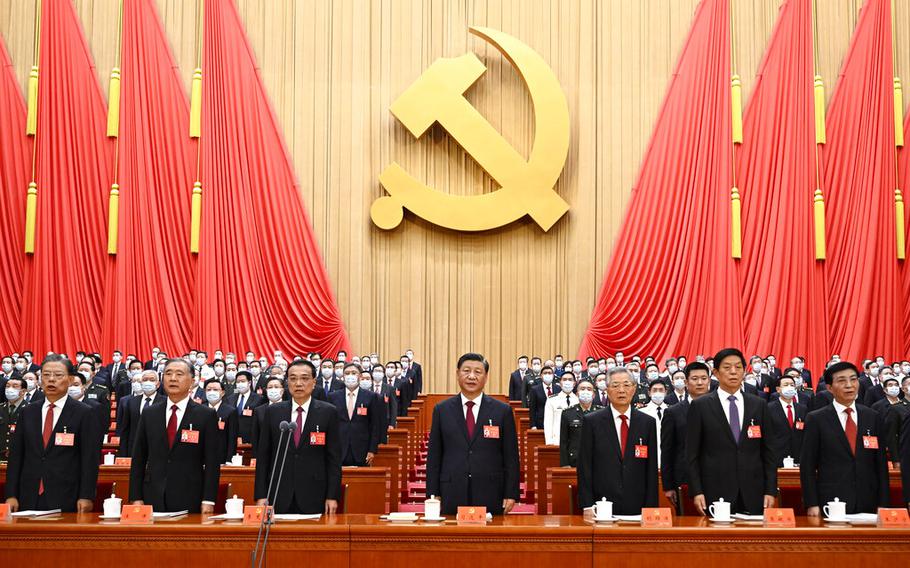 Chinese Communist Party leaders. attend the opening ceremony of the 20th National Congress of the Communist Party of China at the Great Hall of the People in Beijing, Oct. 16, 2022. China on Sunday (Asia time) opened a conference at which leader Xi Jinping received a third five-year term that breaks with recent precedent and establishes himself as arguably the most powerful Chinese politician since Mao Zedong. (Li Xueren/Xinhua)

A meeting of top Chinese officials concluded on Saturday with leader Xi Jinping's power undisputed as his "core" status was enshrined in the Communist Party charter, his former political rival retired and his predecessor being escorted off the stage in a surprising departure from protocol.

About 2,300 delegates at the closing ceremony of the 20th National Congress rubber-stamped Xi's political vision, amendments to the party's constitution and a new Central Committee of some 200 full-time members who will lead China for the next five years. All were passed unanimously though a show of hands followed by shouts confirming no objections.

The choreographed show of unity was undermined by an unexpected break from the program as former party general secretary Hu Jintao was abruptly led away by aides. The 79-year-old, like most retired Chinese leaders, rarely appears in public, and so his greying-hair and visibly frail appearance at the opening of the congress became a point of discussion for Pekingologists.

As a member of the presidium of party elders, Hu sat through the entirety of the opening ceremony and was expected to do similar for the final day. Instead, shortly after foreign journalists entered the hall, two suited men helped him to his feet and guided him off stage, leaving empty a chair to the left of Xi.

Video of the unexplained incident from Agence France-Presse news agency show a possibly hesitant or confused Hu first exchanging words with the men and Xi. After standing, he hovered in place, took a few slow steps, then stopped and turned to say something to Xi, who briefly nodded but remained looking ahead at the assembled delegates.

Hu, who ruled China from 2002 to 2012, eventually left after placing a hand on the shoulder of outgoing Premier Li Keqiang, his protégé and one-time contender for the party's top job.

Chinese state media has not explained - or even mentioned - the early departure. China considers the health and personal lives of top party leaders a state secret. But the unusual scene, which took place mid-ceremony, has led observers to question what could have required the deviation from script. At the last congress in 2017, former leader Jiang Zemin remained in attendance until the end of the ceremony.

Hu being ushered out comes as Xi, 69, has set the stage to be formally be anointed on Sunday as the unrivaled leader of China for at least another five years. Revisions to the party charter added new Xi-era slogans, which in essence say that Xi and his ideology are the "core" of the party and their authority must be protected.

Formally ranked no. 2 leader for the last decade, Li, the outgoing premier, had been seen by some Chinese politics analysts as a check on Xi's power. Like Hu, he rose through the ranks of the Communist Youth League, which was an important network in Chinese politics before Xi's anti-graft campaigns weakened its influence. Despite being sidelined by Xi, Li retained his reputation as a competent technocrat, sympathetic to private businesses.

But Li won't be on the new Central Committee, state broadcaster China Central Television reported on Saturday. That means the 67-year-old is almost certain to retire, despite not having reached the informal cutoff of 68. Another Communist Youth League-affiliated politician, Wang Yang who had been considered a potential premier candidate to replace Li, was also missing from the list.

The final makeup of the 25-member Politburo and its seven-member Standing Committee, the apex of decision-making power in China, will be revealed on Sunday. As was the case in 2017, a designated successor is not expected to be among the new lineup.

Xi's disregard of age norms that have mostly held since the 1990s has been cited by experts as a sign of his near total control. By appointing allies to key positions in the military, security and personnel organs, Xi has been able to maintain a firm grasp on the country's sources of hard power.

He has paired internal party control with a populist agenda to tackle corruption, curb poverty and stoke patriotic fervor. Another addition to the charter was a promise to "resolutely oppose and constrain" those who, in the party's eyes, promote the independence of Taiwan, the self-governing island of 23 million that Beijing claims as its sovereign territory and threatens to take by force if Taipei ever formalizes the separation.

The revisions also referenced what Xi calls "whole-process people's democracy," which he claims can deliver democratic results to China without the political freedoms or leadership elections of Western-style democracy.

In his speech to open the congress on Sunday, Xi laid out a plan for China to attain global leadership as a modern socialist superpower that represents a "new choice" for humanity by 2049, 100 years after the People's Republic of China was founded. He also warned of "dangerous storms" that would prevent the nation's rise if it did not achieve absolute security from threats.

In his closing remarks, Xi praised the party's "fighting spirit" and called for the cadres to "dare to struggle, dare to win, get your heads down for hard work and be determined to push forward."

The Washington Post's Vic Chiang and Pei-Lin Wu contributed to this report.