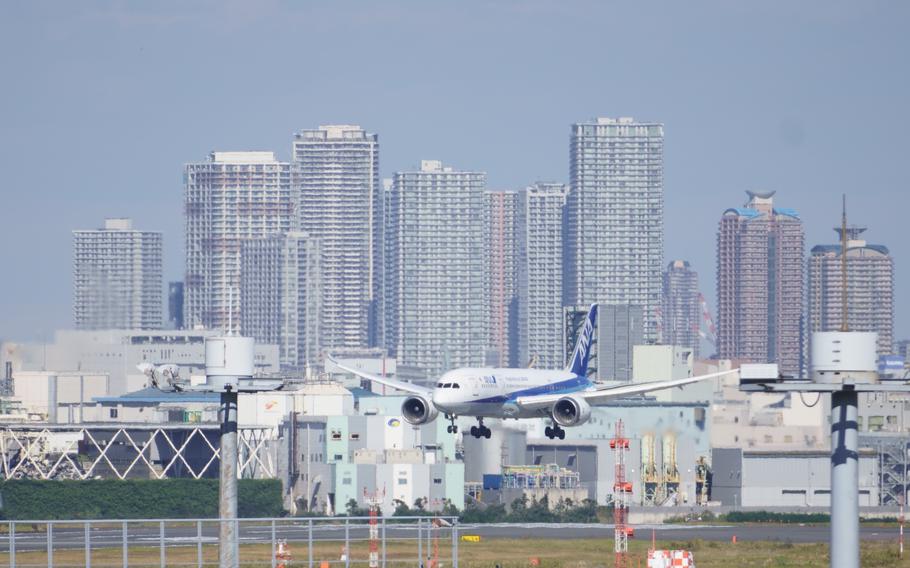 An international flight lands in November at Haneda International Airport in Tokyo. (Akifumi Ishikawa/Stars and Stripes)

TOKYO - More than 2,000 Ukrainians had entered Japan as of mid-October, according to the Immigration Services Agency, living in prefectures across the nation as they worked to build a new life.

However, staying for a prolonged period in a new environment has brought difficulties. Some people have suffered from depression as a result of language barriers; others have changed their residence in search of connections with other Ukrainians.

A special class was held at Izumi Elementary School in Chiyoda Ward, Tokyo, on Sept. 16, with a presentation by Olivia Zhyblovska, 12, and her shy younger brother, Yan Zhyblovski, 9. They have been attending the municipal school since April, after coming to Japan from Kyiv in mid-March with their 21-year-old sister and 44-year-old mother with the help of a Ukrainian living in Japan.

Looking at her sixth-grade classmates, Olivia said in Ukrainian that she actually had been very anxious about being isolated in the class. In his classroom for third-graders, Yan held a picture he drew of Ukraine’s national flag with blue and yellow pencils, and said he wants Ukraine to win the war.

In addition to regular classes, Olivia and Yan study Japanese in a class for children whose mother tongue is not Japanese. Olivia can now read hiragana.

The two were initially surrounded by other children when they began to attend the school. But Principal Etsuko Murata became concerned as they gradually spent more time alone. Olivia also began to refrain from speaking even in the class for English, which she is good at.

Murata urged other children to talk to them, as they might need help. She also encouraged the students to make and attach cards with the names of classroom items, such as brooms and blackboards, written in hiragana.

The special class last month was also part of these efforts to let the Ukrainian children know that they are not alone. Murata had been worried that the two might be unable to say what they wanted because they thought they had to speak in Japanese.

Their special remarks were translated during the presentations into Japanese and shared with other students. Olivia smiled and said she was glad to make her feelings known.

“It was nice to hear her feelings. But there may be something more bothering her. I want to talk with her if she has something she wants to say,” said classmate Rino Tabata, 12.

“Their father still lives in Ukraine. We’ll try to make sure they don’t feel afraid and hold their feelings back because they can’t speak Japanese,” Murata said.

According to the Immigration Services Agency, 2,012 people had fled from Ukraine to Japan as of Oct. 10, after the Russian invasion began on Feb. 24. Figures as of Oct. 5 showed them living in 45 prefectures, though mainly in the Tokyo metropolitan area, having found people who could act as guarantors or using the agency’s service to match displaced Ukrainians with employers, such as local governments.

However, some people have changed residences quickly, unable to put down new roots.

In mid-July, the city of Morioka accepted a mother and child who came to Japan from Kyiv, drawing on its long experience of taking in people hit hard by the Great East Japan Earthquake. The city provided the Ukrainians with public housing free of charge, as well as furniture and appliances. It also arranged for the child to attend a local school with a Japanese language class.

But the mother and child moved to the Tokyo metropolitan area after a month, saying they wanted to live in a place where there were many Ukrainians.

“Providing support for their daily lives is possible. But in rural areas it’s difficult to offer them a particular cultural community,” said Katsuyuki Saito, chief of the city’s cultural and international division. “It was very unfortunate that the family left the city, but we’ll accept people again and continue to support them.”

After arriving in Japan, Ukrainians without guarantors temporary live in hotels in the Tokyo metropolitan area and move on to localities that agree to take them. The immigration agency had made such arrangements for 104 families by Oct. 5, but some have returned to the temporary facilities.

“People try to integrate into the community where they were accepted. However, when life in the new environment becomes prolonged, they come to feel they’ve lost their home, increasing their pain,” said Masaharu Maeda, a professor of disaster psychiatry at Fukushima Medical University.

“It’s important for those who provide Ukrainians with housing and other support to maintain their commitment to those people, by learning about their culture, for example. They also need to give them opportunities to meet others in the same situation,” Maeda said.