The pomp, pageantry and paranoia of China's Communist Party Congress 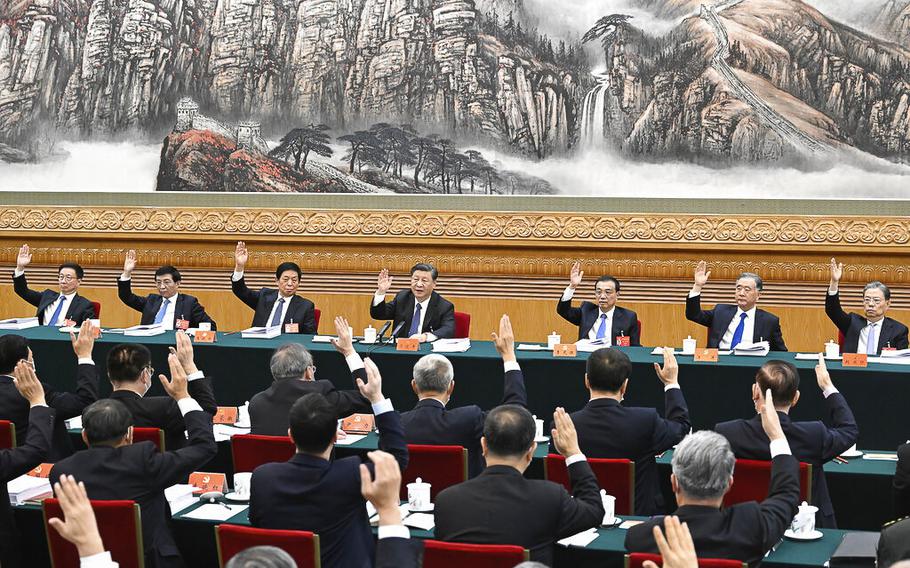 The presidium of the 20th National Congress of the Communist Party of China holds its second meeting at the Great Hall of the People as members raise their hands in Beijing, China, Tuesday, Oct. 18, 2022. (Shen Hong/Xinhua)

No effort has been spared to ensure the smooth execution of a crucial Chinese Communist Party congress this week where Xi Jinping is expected to extend his tenure as his country's most powerful leader in decades.

In Beijing, police and volunteers with red armbands work at checkpoints and patrol neighborhoods under orders to operate with "warlike" readiness during the six-day meeting that began Sunday. To enter the city, residents must have tested negative for the coronavirus twice within the previous three days. After a one-man protest in Beijing where banners were hung from an elevated road in the district of Haidian, guards were posted on bridges across the city.

The airwaves have been flooded with testimonies and images of people all over the country competing with each other to celebrate their leader's words.

A 100-day security operation before the meeting began Sunday led to the arrest of 1.4 million people, laying the "solid foundation for the security and stability" of the 20th Party Congress, according to China's Ministry of Public Security. In Anhui province, more than 600 miles from Beijing, no fewer than a third of the police were deployed to patrol the streets against any disturbances for the duration of the meeting.

"It's always incredibly tight, but this time, because Xi Jinping is breaking the mold, he's even more sensitive and everyone is going double. It's even tighter than it was before," said Steve Tsang, the director of the China Institute at the London University's School of Oriental and African Studies.

On Sunday, Xi opened the 20th National Congress of the CCP, a political meeting held every five years that sets out the party's broad priorities and the next batch of leaders. Xi is expected to break with tradition of leaders stepping down after a decade and continue his role as general secretary and head of the party's Central Military Commission, the two most powerful positions.

Characterized by pomp, pageantry and paranoia, the event is often more about optics - a time for the Chinese leadership to impress upon the public the legitimacy of the CCP's rule.

Xi on Sunday delivered a triumphalist speech in the Great Hall of the People in Beijing, where he pledged to turn his country into a modern socialist superpower that represents a "new choice" of governance and development, different from the dominant model of Western democracy.

As he spoke, the internet was flooded with photos of Chinese residents - delivery workers, People's Liberation Army soldiers, Buddhist monks, patients at rehab centers - devotedly watching the speech. In Guangdong province, the city of Gaozhou organized 50,000 people to watch the event.

Primary schools held karaoke contests, and teachers wrote poems dedicated to Xi. ("You are the helmsman, the sail, the oar, the hope," one teacher wrote.) Local officials in Ningde in Fujian province, where Xi was party secretary, said they were "overwhelmed with emotion" by his speech.

"After listening to his speech, I now understand how strong the motherland is and my love for this land is even deeper," one primary school student wrote about Xi's remarks, according to a post on WeChat from a school in Behai in Guangxi province.

In Xinjiang, officials in Toksun county were "fired up," and in Shenzhen, officials and residents alike were "full of joy" after tuning in to the speech, according to local government social media posts. A 40-episode television series loosely based on Xi's poverty-alleviation work in Ningde has been aired nightly by state broadcaster CCTV since Sunday.

To ensure blue skies for the meeting's opening, Beijing officials held meetings on how to push the "one microgram" operation, a reference to bringing the amount of airborne particulate matter or PM2.5 down to 1 microgram per cubic meter of air. Steel factories in Hebei province, near Beijing, cut production by as much as half starting in mid-October through the end of the congress, according to local media.

Having succeeded, Zhao Lei, secretary general of the Beijing Municipal Committee, said, "We have the confidence and the determination to keep a clear sky in Beijing" and applauded Xi's speech. "We have witnessed this great era together," Zhao told the state-run China Daily.

The fawning over major events and pronouncements by the party are not unusual, especially in Chinese state media and propaganda organs. But the degree of fervor and the focus on Xi underline the direction in which China is moving - toward more centralized and personalized rule under one man.

"The cult of personality around Xi Jinping is particularly obvious," said Lu Yeh-chung, a professor of diplomacy at National Chengchi University in Taipei. "It shows that Xi's control over society, as well as the party's skills and techniques in forming narratives, are becoming more advanced than before," he said.

Without naming these specific challenges, Xi in his report called on his country to "unite in struggle" to resist outside efforts to "blackmail, contain and exert pressure" on China - language that shows the leadership's turn away from the increasingly open years of reform.

Not everyone is happy with Xi's continued hold on power. Hong Kong democracy activists protested outside a Chinese consulate in Manchester, England. After consular staffers dragged one of the demonstrators onto the consulate grounds and beat him, China's ambassador to the Britain was summoned by the British Foreign Office. In China, the protest slogans that were hung from a bridge in Haidian have started to appear in public restrooms, according to social media posts.

"The Congress is not a place for debate. It's primarily a ritualistic display of power," said Joseph Torigian, a Chinese-politics expert at American University in Washington, who said this week's meeting will offer mostly ambiguous hints about China's future. "The big question is whether he will change the longer he is in power."

The Washington Post's Vic Chiang and Pei-Lin Wu in Taipei contributed to this report.