Donny Conway, a former Navy petty officer second class, poses with photos of his daughters, Christina and Chihiro, at his California home on Oct. 17, 2022. (Donny Conway)

In the 10 years since Donny Conway’s daughters Christina and Chihiro were taken by their Japanese mother to her home country without his consent, he has kept their bedroom in his California home filled with unopened Christmas presents, handwritten notes and reams of legal documents, he said.

The former Navy petty officer second class is one of hundreds of American parents whose children were abducted by another parent and taken to Japan before April 2014, when it ratified the Hague Convention on the Civil Aspects of International Child Abduction.

Some parents whose children were abducted to Japan after the agreement was signed are finally starting to see some progress in seeking their return, but others, like Conway, remain forgotten.

“There’s only so much you can achieve when it’s pretty much just sanctioned abduction,” he told Stars and Stripes in a series of interviews in September and October. “The numbers aren’t high enough for people to care.”

Japan is known as a “black hole” for parental child abduction, said Jeffery Morehouse, father to an abducted son, Atomu, and founder of Bring Abducted Children Home, a U.S.-based nonprofit. Prior to April 1, 2014, if a Japanese parent living in the United States returned with their child to Japan, there was very little chance the child would be returned, or that the other parent would even be granted visitation, Morehouse said.

Between 1994 and 2014, when the State Department established the Office of Children's Issues, 416 children were abducted by parents from the U.S. to Japan, according to Bring Abducted Children Home’s website, citing State Department data. 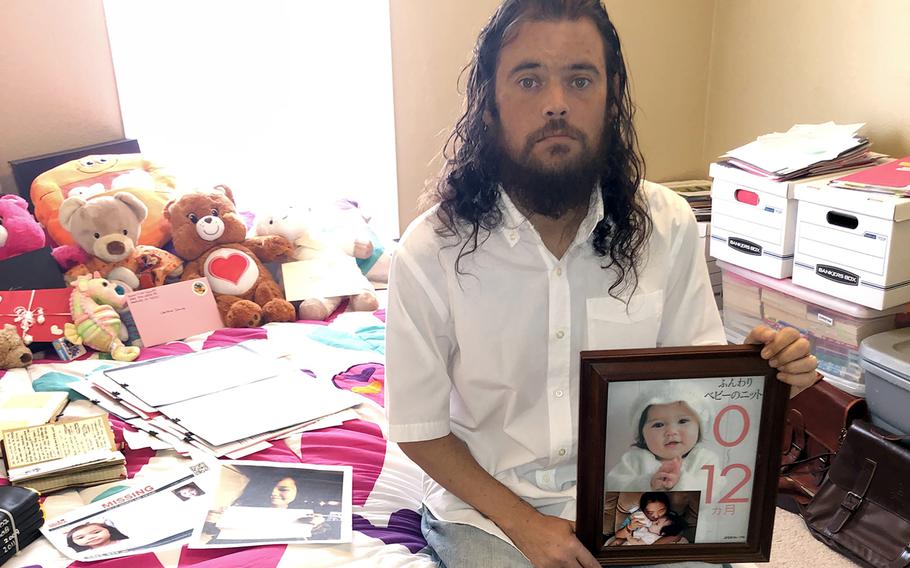 Donny Conway, a former Navy petty officer second class, poses with photos of his daughters, Christina and Chihiro, at his California home on Oct. 17, 2022. (Donny Conway)

Japan’s western allies began pressuring it to join the treaty, a Ministry of Foreign Affairs spokesman said by phone during the first in a series of interviews beginning Sept. 20. The spokesman declined to say when the first overtures were made.

The Hague Convention provides a “civil legal remedy” for the return of children who are unjustly removed or “retained outside their country of habitual residence” in another signatory country, the U.S. Embassy in Japan website says. The treaty also provides a framework to “protect legal rights of access and visitation.”

Conway, like the other pre-Hague parents, was able to apply for access to his children through the Hague Convention, Conway said. The State Department facilitated his application with Japan’s Ministry of Foreign Affairs but did little else, he added.

A State Department spokesman declined to comment on the record for this story.

If an application is accepted, the government of Japan connects both parents with an outside mediator and local attorneys, but their involvement stops there, the ministry spokesman said.

Conway was granted Hague access by the ministry on April 21, 2015, he said. He hired a Japanese attorney and traveled to Japan, hoping to at least be able to talk to or see his daughters.

He presented the document from the ministry at city hall in Ebina and Zama in Kanagawa prefecture. To his chagrin, they called his ex-wife, Yumika Arima, and asked her if she would provide access to the children, Conway said. She said no.

“All of those left-behind parents ... are stuck without a remedy, and the Hague Convention has no relevance to their circumstances,” he said.

Morley said their only potential path is through Japanese civil law, but he called that route “totally minimal and meaningless.” Visitation orders are “essentially unenforceable,” he said. The ministry spokesman admitted as much.

“We do our best to realize the visitation or contact, but we don’t have enforceability,” the ministry spokesman said. It’s customary in Japan for some government spokespeople to speak to the media on condition of anonymity.

Conway doesn’t know if the girls would choose an American or a Japanese life, but he just wants them to know they were abducted, that they have bank accounts in America, resources and a father who never stopped looking for them, he said.