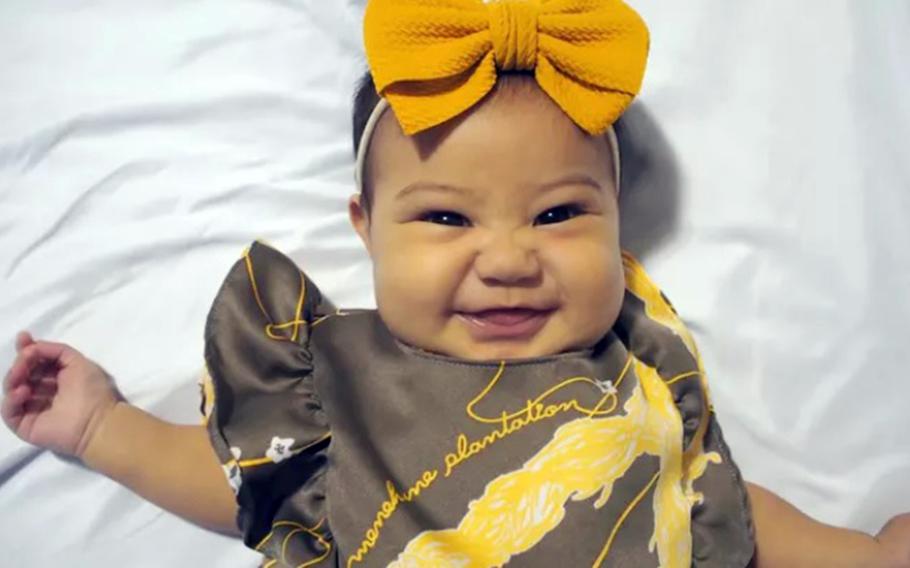 Emma Murphy, daughter of Tricia and Tech. Sgt. Brandon Murphy, of the 730th Air Mobility Squadron at Yokota Air Base, Japan, was diagnosed with biliary atresia on May 31, 2022. (Tricia Murphy)

But six weeks later, Emma wasn’t gaining weight. At age 2 ½ months, she was diagnosed with possible liver failure and despite surgery meant to correct the condition, she needs a transplant, her mother told Stars and Stripes by phone Oct. 7.

Emma and her parents, Tricia and Tech. Sgt. Brandon Murphy, of the 730th Air Mobility Squadron at Yokota in western Tokyo, traveled on Oct. 13 to Cleveland Clinic in Ohio, where Emma is preparing for a liver transplant, her mother said.

Emma’s aunt, Carie Amoroso, 50, of Lewiston, Maine, started a GoFundMe campaign to cover expenses associated with the family’s medical odyssey that are not covered by their insurance policy, Amoroso told Stars and Stripes by Facebook Messenger on Oct. 6.

Within three months, doctors at Yokota’s 374th Medical Group discovered levels of bilirubin in Emma’s blood 12 times normal. Bilirubin, a yellowish pigment that results from the breakdown of red blood cells in the liver, is normally excreted, according to the Mayo Clinic website.

High bilirubin levels may indicate liver or bile duct problems, according to the website. The Yokota medical group immediately contacted the Tokyo Metropolitan Children's Hospital, which directed the family to the National Center for Child Health and Development hospital in the city’s Setagaya ward, Tricia Murphy said.

After a 1 ½ weeks of tests there, Emma was diagnosed with biliary atresia on May 31, her mother said.

“Biliary atresia is when your biliary system, your bile ducts, all the little tubing inside of your liver and outside of your liver that connect to your intestines, becomes either inflamed, blocked or malformed,” Tricia Murphy said.

The Murphys flew to Cleveland for the procedure because their insurance provider, Tricare Prime, outsources some coverage in Japan to International SOS, a health and security services firm, which does not certify any hospital in Japan for liver transplants, Tricia Murphy said she was told.

Early on, Emma’s skin turned yellow, a symptom of jaundice, a sign of a bilirubin buildup in the body that can cause the skin, white of the eyes and gums to turn yellow, Tricia Murphy said. Another symptom of a liver problem is eight or nine bowel movements per day. Parents should expect two bowel movements daily for babies six months to one year old, according to the Mayo Clinic.

October is National Liver Awareness Month, according to the National Liver Foundation, which encourages people to act early to prevent liver disease.

“If she had her surgery before 60 days, there's a possibility that we wouldn't be trying to get this transplant right now,” she said.

The Murphys arrived in Cleveland on Saturday and Emma had her first appointment Monday, according to a post on the GoFundMe site by Brandon Murphy.

“We thank you again for all of your love and support for our Emma-chan,” he said, using a Japanese term of endearment.