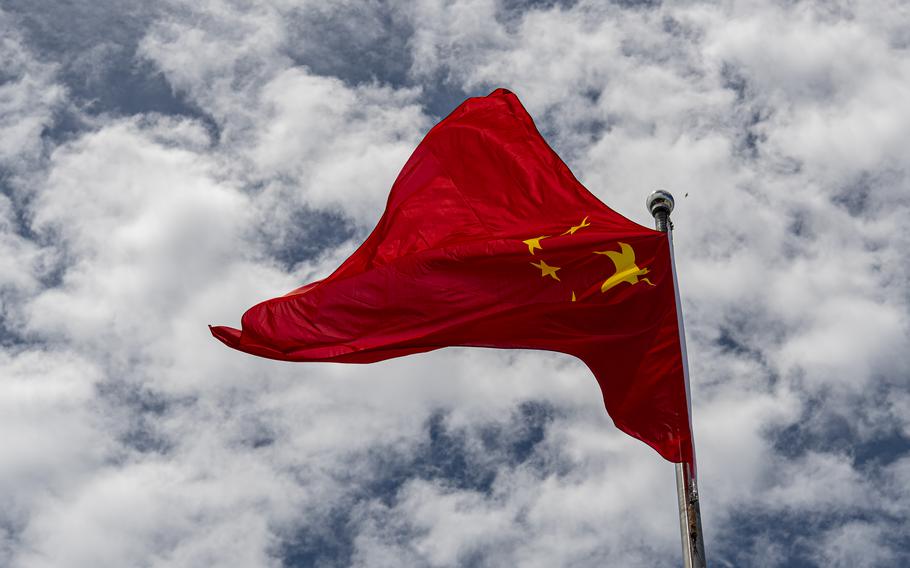 A Chinese flag flies above the Chinese Embassy in Washington, D.C., on July 6, 2022. According to reports on Friday, Oct. 14, a protester hung a banner in Beijing that read “remove dictator and national traitor Xi Jinping,” days before a key political meeting expected to extend Xi’s rule. (Carlos Bongioanni/STARS AND STRIPES)

A one-person protest in Beijing has called for elections, an end to the country's strict "zero covid" policy and the removal of "dictator" Xi Jinping, in a rare display of political dissent that was met with a wave of online censorship days ahead of a key political meeting expected to extend Xi's rule for at least another five years.

"We want to eat, not do coronavirus tests; reform, not the Cultural Revolution. We want freedom, not lockdowns; elections, not rulers. We want dignity, not lies. Be citizens, not enslaved people," read the red handwritten characters on large white banners hung from Sitong Bridge in the city's northwest Haidian district on Thursday at around midday local time, according to pictures and video of the banners shared widely online.

A second banner read: "remove dictator and national traitor Xi Jinping." Nearby pedestrians stopped to read the banners and stare at a plume of black smoke from a fire lit on the bridge by the individual who appeared to be dressed in the yellow hard-hat and orange jacket of a construction worker, according to videos of the incident.

Some images appeared to show the individual being taken away by police, although there had not been any official confirmation of an arrest by Friday. The Haidian district public security bureau hung up when called by The Washington Post.

The Chinese Communist Party, intolerant to criticism of top leaders at the best of times, is currently on hair-trigger alert as the country's most senior 2,300 politicians are arriving in the capital city for a congress held every five years. For Xi, the country's most powerful leader in decades, the meeting is expected to be a moment of triumph as he upsets past convention to stay on as party leader for more than two terms.

On Chinese social media, censors battled with users who tried to share information about the protest, vastly limiting the number of posts visible. Search results for terms as generic as "Beijing," "Haidian," or "Sitong" returned far fewer entries than normal and only from officially verified accounts.

Some users attempted to circumvent the restrictions by referring obliquely to the incident - a common practice of censorship-evasion. Some posted a song titled "the brave one" or spoke about a "single spark" in reference to a famous revolutionary essay by Mao Zedong titled "a single spark can start a prairie fire."

The defiant act was hailed by Chinese dissidents and overseas human rights activists, many of whom likened the protester to "tank man," the unidentified man who faced down Chinese soldiers on Chang'an Boulevard on June 5, 1989. China's high-tech authoritarianism means activists can only operate in "lone warrior" mode, Teng Biao, a Chinese human rights advocate who now lives in the United States, wrote on Twitter.

Security in the capital tends to be at it highest during major political events like the upcoming congress. Dissidents who live in Beijing are often taken away by minders to far-flung parts of the country and checks increase for people entering the city. This year, China's continued strict covid controls have added a layer of travel restrictions and surveillance.

By Friday, police had been installed near prominent bridges across the city, according to pictures posted by residents online.