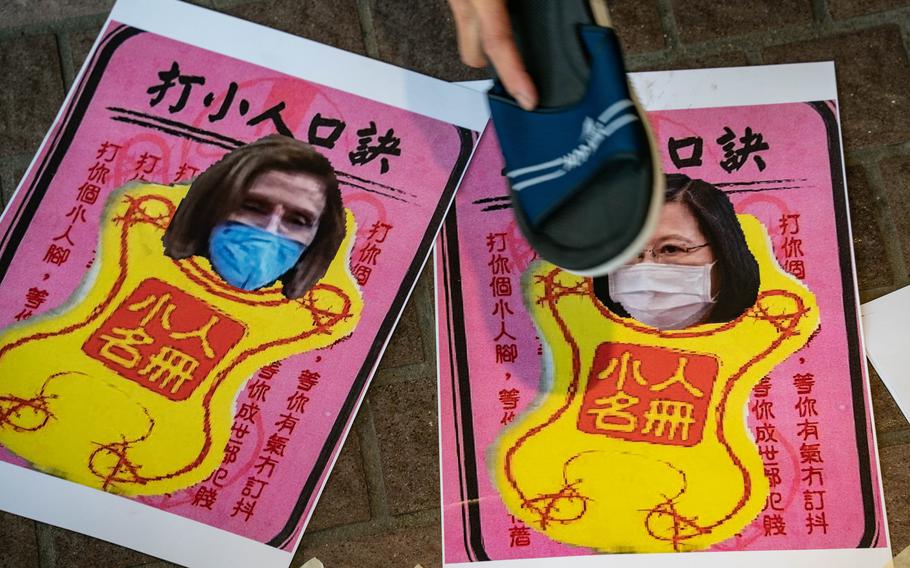 A pro-China supporter hits images of U.S. House of Representatives Speaker Nancy Pelosi and Taiwan President Tsai Ing-wen with a shoe, as she carries out a villain hitting ritual during a rally on Aug. 11, 2022, in Hong Kong. (Anthony Kwan, Getty Images/TNS)

TAIPEI, Taiwan (Tribune News Service) — As the Taiwanese government seeks to respond to China’s unification pressure campaign, a significant impediment is the self-governing island’s own political polarization — which, in some respects, is worsening.

Taiwan is a young democracy, having only held its first direct presidential election in 1996. For much of Taiwan’s history, it was under one-party authoritarian rule by the Kuomintang (KMT), now the main opposition party.

This recent history, as well as an identity crisis KMT is going through over its own long-term policy platform on relations with Beijing, have combined to make it more difficult for the government of President Tsai Ing-wen of the center-left Democratic Progressive Party (DPP) to push through reforms aimed at curbing Chinese influence in Taiwanese society.

Local disinformation experts and democracy advocates say Beijing’s actions are aimed at spreading discord and dissent among Taiwanese society, as well as suspicion of the United States and other Asian democracies such as Japan.

“The challenge we are facing now is Taiwan is a democracy, it’s very transparent, it’s open, and China has been using our openness, our transparency, and our freedom to weaken and undermine our democracy,” said Chih-Cheng Lo, a Taiwanese lawmaker with the governing DPP and a primary advocate of legislation that would limit China’s influence operations via the media and political campaigns inside Taiwan.

There is some divergence in Taiwanese polling — depending on the polling firm and how the question is framed — around public sentiments about formally declaring independence from China versus maintaining the status quo of de facto sovereignty without announcing independence. But it is clear that the vast majority of Taiwanese increasingly favor one of those two positions rather than the long-standing position of KMT; the party has advocated for eventual unification with China, with the important caveat of the island being under Taiwanese rule.

Taiwanese support for unification has gradually declined since the 1990s and Taiwan’s transition into a full democracy. Only a combined 6.5 percent of the public supports either immediate unification or maintaining the status quo while moving towards unification with Beijing, according to June polling by the Election Study Center of National Chengchi University.

Meanwhile, the pro-independence camp, whether it is declared immediately or at some future date, saw support from 30.3 percent of those surveyed. Support for maintaining the status quo had the most support, at 56.9 percent.

In August, China retaliated against Taiwan for House Speaker Nancy Pelosi’s visit to the island with military exercises that practiced encirclement tactics that could be used in a blockade attempt. After those drills, support among surveyed Taiwanese for full-blown independence stood at 50 percent, with 25.7 percent supporting maintaining the status quo, according to August polling by the Taiwanese Public Opinion Foundation.

The same survey found that the center-left DPP had the highest party affiliation at 30.2 percent with the center-right KMT a distant second with 16.5 percent. Self-described independents were 33.9 percent of those polled.

In an important way, Taiwan’s political system is different than the democratic systems in other countries, where fault lines may exist over differences of ideology, religion or political party affiliation.

“Taiwan is very special. It is an outlier in global comparative politics because the main fault line is in voters’ outlook on the future of Taiwan’s relationship with China,” said Marcin Jerzewski, who leads the Taiwan Office of the European Values Center, a pro-liberal democracy nongovernmental organization founded in the Czech Republic.

In this way, because the vast majority of Taiwanese voters appear to have irrevocably turned against unification with China — due to a combination of aversion to China’s increasing authoritarian turn under President Xi Jinping as well as their own pride in their hard-fought democratic freedoms — KMT is at an inflection point if it wants to be able to compete in national elections, according to experts.

Jerzewski said KMT, which last won the presidency in 2012, is going through an identity crisis. Its party leaders understand that it must adopt policies that are less accommodating of Beijing if it wishes to take back power from the DPP. But a strong and politically engaged rump of the party consistently pulls the leadership back every time they try to toughen their stance toward China, including through supporting closer alignment with the United States.

“Those traditional fault lines are changing, and the KMT doesn’t really have a good idea for how to craft their own China policy because, yes, there are some deep blue people who want the KMT to be the party that pushes for unification, but at the end of day they are fringe elements within the party,” Jerzewski said, referring to the hardcore supporters of KMT, whose official party color is blue.

And because KMT has no long-term answer yet for how it resolves the competing wishes of its older, more pro-China voters and the younger generations of pro-democracy voters it is trying to win over, party leaders have resorted to focusing on attacking DPP to inflame partisan sentiments and distract voters from their own internal discord over their China policy, said Jerzewski, whose office has a close relationship with the Taiwan NextGen Foundation think tank, which has ties with the DPP.

“I think that this identity crisis for the main opposition party is turning politics to be more partisan, it’s making cross-partisanship more difficult, and it is changing the debate where those short-term issues, those short-term scandals are what the parties capitalize on, because it is easier than the long-term debate,” he said.

Nearly 60 percent of KMT supporters opposed Pelosi’s visit to Taiwan this summer, according to the Taiwanese Public Opinion Foundation survey.

KMT party officials defended their China policy, noted that they have backed policies to boost Taiwan’s defense capabilities toward China and played down reports of internal tensions over the future direction of their party.

“We won’t give up dialogue with mainland China. But in the meantime, we support strengthening our national defense power in every dimension, whether that’s arm sales or our [mandatory military] service time or to expanding military training. This is our new policy,” said Alfred Chia Hsing Lin, a deputy communications director of KMT.

He said large majorities of surveyed Taiwanese support KMT’s focus on dialogue and keeping lines of communication open with Beijing, which he argued DPP has only given lip service toward while actually pursuing policies of “provoking China.”

The high degree of political polarization inside Taiwan has some Taiwanese democracy activists, experts and DPP lawmakers worried that they are losing valuable time to push through parliament what they argue are needed regulatory reforms to reduce China’s ability to influence Taiwan’s democracy.

In 2020, Taiwan’s parliament passed the Anti-Infiltration Act, which Lo of the DPP was a sponsor of. The law prohibits Taiwanese entities from accepting funding from “hostile” foreign sources in order to influence elections and referendums. The KMT strongly opposed the measure and accused the DPP of moving toward authoritarianism.

Lo acknowledged that those types of accusations are very politically sensitive for the DPP because of how deeply the party’s supporters value liberal democratic values, especially freedom of speech.

“That’s the burden we are carrying right now, especially for our party, who have been fighting for democracy, freedom and so on,” he said in an interview in his parliament office here. “So anything that has to do with censoring speech or trying to expand the role of the state in regulating the society, some people in our party and outside our party are saying, ‘No, that’s not the values that we embrace.’”

After the 2014 “Sunflower Movement” — a Taiwanese student-led protest movement against a trade pact with China pushed by the former KMT government that opponents felt would give the Chinese government too much influence over Taiwan’s economy — Beijing began to shift its influence operations strategy for Taiwan, said Puma Shen, the chairperson of DoubleThink Lab.

“They kind of changed their strategy after that, thinking that they can only spread pro-China messages for the elderly in Taiwan. … But for the younger generation, lots of them just do not believe in China, so if you spread a pro-China argument it could backfire. So they decided to spread other conspiracy theories to our younger generations,” said Shen, whose Taipei-based research organization seeks to document and expose Chinese disinformation not only in Taiwan but around the world.

Rather than promoting Chinese policies, Beijing’s disinformation aimed at Taiwan’s younger generation, most frequently through the social media platforms that are popular in Taiwan, like LINE. The efforts are often focused on attacking and lowering public opinion of the United States and Japan, said Shen.

That could include, for example, the promotion of arguments that Washington is behaving hypocritically in accusing Beijing of human rights violations for its treatment of ethnic Muslim minorities in the Xinjiang region when the United States’ own mass incarceration policies have had a disproportionate impact on Black Americans.

“So even if they [young Taiwanese] do not believe in China, they do not believe in the U.S. and Japan also,” said Shen, who last year conducted a small survey of roughly 200 Taiwanese college students that found significant numbers of them had been exposed to negative online opinions about the United States and Japan. “That’s a problem because in the long-run they might say, ‘U.S. is the devil and maybe China is not that bad.’ That’s the ideology that China wants to spread.”

Chinese misinformation and disinformation operations are taking place every day inside Taiwan through both mainstream media outlets controlled by Pan Blue-aligned Taiwanese conglomerates — which have become both more vulnerable and sympathetic toward Beijing because of their extensive business investments inside China — as well as through social media, according to experts.

Billion Lee, the co-founder of the CoFacts website, a community-run collaboration for fact-checking stories and rumors circulating online in Taiwan, said she is seeing a lot of disinformation in the form of images, photos, short videos and audio clips as well as “content farm” articles coming into Taiwan from abroad, though identifying the exact origination point can be difficult due to widespread usage of virtual private networks, or VPNs.

The disinformation is often pushed through the social media messaging app LINE, which is used by an estimated 90 percent of the Taiwanese population, as well as WeChat, the Chinese instant messaging app, Lee said.

Facebook and TikTok, which is owned by a Chinese company, also play a role in spreading disinformation.

But it is LINE, which is also massively popular in Japan and Thailand, that is the most worrisome due to its ubiquity in Taiwanese society, as well as the closed chat rooms the app is modeled around, she said. Those make it difficult to know how far disinformation is spreading among Taiwanese users and what its impact is on them.

Annabelle Chih, a local journalist, contributed to this report. Reporting for this article was made possible by a grant from the Pulitzer Center on Crisis Reporting.