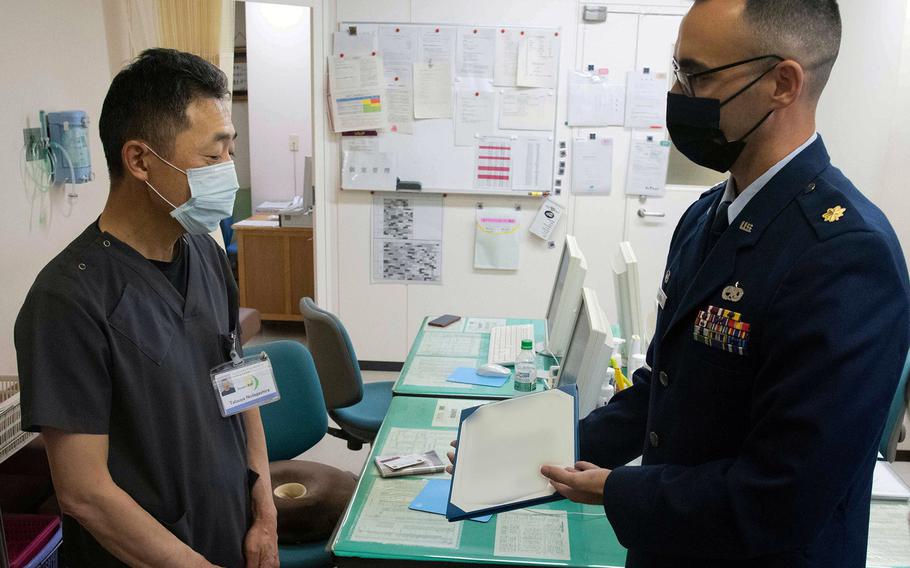 Air Force Maj. Stephan Rose, commander of the 35th Maintenance Squadron at Misawa Air Base, Japan, presents a letter of appreciation to Dr. Tatsuya Nodagahira during a visit to Hachinohe City Hospital on Sept. 16, 2022. Nodagahira and his trauma team saved an airman's life after a major vehicle accident. (Joao Marcus Costa/U.S. Air Force)

TOKYO — Air Force maintainers recently visited a hospital near Misawa Air Base in northeastern Japan to thank doctors for saving the life of an airman involved in a major vehicle accident over the summer.

The airman, assigned to the 35th Maintenance Group, was a passenger in a vehicle that lost control and hydroplaned into a roadside pole on July 28, according to a Sept. 21 base news release.

The injured passenger received the full force of the collision, which crumpled his side of the vehicle, base spokesman Tech Sgt. Timothy Moore told Stars and Stripes in an email Wednesday. He did not respond to questions about the condition of the driver, also a member of the maintenance group.

Alcohol was not a factor in the accident, Moore wrote, adding that he could not identify the injured airman due to privacy concerns.

“The Airman came in with serious injuries and in critical condition,” Dr. Tatsuya Nodagahira, emergency room chief at Hachinohe City Hospital, about 20 miles south of the base, said in the base news release.

Moore in his email would not provide details on the extent of those injuries, but said the Japanese trauma team succeeded in stabilizing him.

The maintenance squadron’s leaders visited the hospital on Sept. 16 on behalf of the base commander, Col. Michael Richard, bringing the Japanese doctors a letter of appreciation and small gifts, including squadron coins and American snacks, according to the base release.

“We can’t do our mission here without the continued support of the local population,” the squadron’s commander, Maj. Stephen Rose, said in the release. “We are grateful for their immediate actions and the lifesaving care they provided.”

The airman is now recovering stateside with family but is expected to return to Misawa to complete his tour, Rose said in a statement emailed to Stars and Stripes on Wednesday.

“When he returns, our focus will be on continuing to provide support in his recovery journey and his return to duty,” he wrote. The wellbeing of the Airman is our priority.”

Nodagahira said his medical team was grateful to be of service.

“We were able to give him the proper care he needed, and we’re all happy he made it out OK,” he said in Misawa’s release.