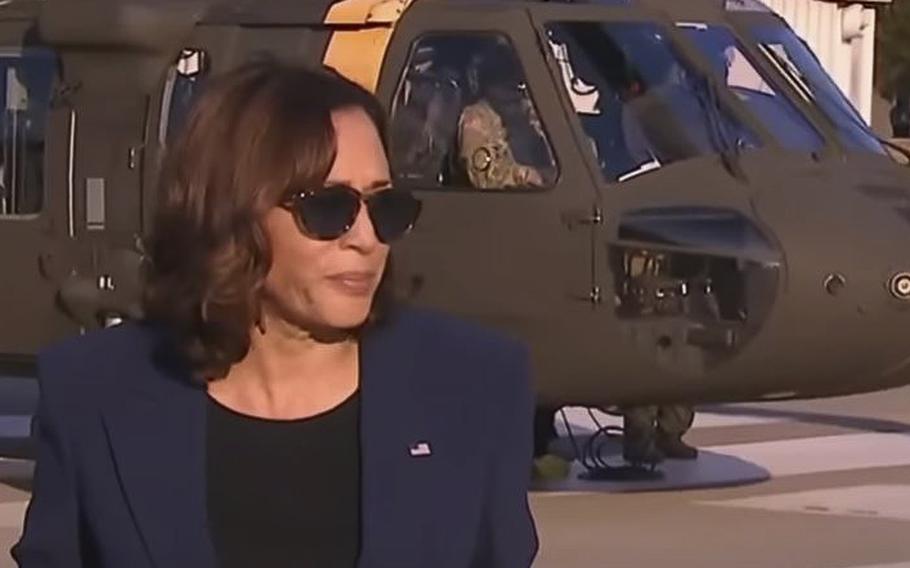 A video screen grab shows Vice President Kamala Harris in front of a U.S. military aircraft at the Demilitarized Zone dividing the Korean peninsula, where she said the U.S. had a strong alliance with the Republic of North Korea. (YouTube)

WASHINGTON (Tribune News Service) — Kamala Harris’s whirlwind tour of Japan and South Korea this week amounts to a microcosm for the state of her vice presidency: an ambitious, historic and increasingly confident effort still beset by the occasional high-profile gaffe.

In Japan, Harris stood alongside other world leaders at the state funeral for Shinzo Abe, the former prime minister whose assassination at a campaign event rattled a key American ally.

She delivered a carefully calibrated denunciation of China from the deck of a U.S. warship intended to reassure allies — without deepening a rift with Beijing that President Joe Biden has widened with explicit pledges to defend Taiwan from an invasion.

And at the Demilitarized Zone dividing the Korean peninsula, a photo-op of Harris gazing through binoculars across the heavily fortified border echoed the previous visits of five presidents.

But the clip of the vice president circulating on cable news the next morning featured an unfortunate slip of the tongue, after she said the U.S. had a “strong alliance” with “the Republic of North Korea.”

The moment illustrated the microscope of scrutiny that Harris, the nation’s first female vice president, labors under as she tries to rebuild her stature within the White House and with voters. Her first year in office was marked by rampant staff turnover, rhetorical stumbles, and struggles to address migration from Central America, her highest-profile assignment from the president.

At the DMZ, Harris clearly meant to refer to the Republic of Korea — South Korea’s official name — and she is hardly the only politician to commit such a slip. Only hours earlier, Biden made a much more awkward gaffe when he called out for a deceased congresswoman at a White House event.

Still, White House officials say perceptions of Harris within the West Wing warmed in recent months as her office staff stabilized under a new chief of staff and the former California Senator demonstrated more political acuity.

She has earned praise even from skeptics in the administration for her leadership of the White House’s response to the Supreme Court ruling striking down national abortion rights.

The vice president’s outspokenness on abortion has impressed Biden’s aides, according to a person familiar with their thinking, and is viewed as particularly helpful because the president — a nearly 80-year-old man and a practicing Catholic — can be uncomfortable speaking about the issue.

Harris, who is 57, has stood out as a key interlocutor with state and local women’s rights groups, a second person said. And she’s served as a bridge to Black, young, female and progressive voters who have not always rallied behind Biden.

Many in the West Wing continue to fret that Harris’s retail political skills leave much to be desired, and her staff keep her public appearances closely managed. Her aides publicly bristled when she was given responsibility for addressing the root causes of migration from central America, and migrant flows at the Southern border have only increased.

Some in the White House say that her meticulous, prosecutorial approach to her portfolio is often risk-adverse and lacks a populist touch.

But as her trip to Asia demonstrated, over-preparation can serve Harris well conducting high-stakes diplomacy. Abroad, she capably projects the image of a controlled and confident world leader who speaks for the president. Aides say the vice president is increasingly comfortable with that role. Less than two years into her term, Harris has met with more than 100 world leaders, one White House aide noted, including high-profile trips to Vietnam, Singapore, Japan, South Korea, Poland, Romania, Germany and France.

Enlisting Harris to help navigate Taiwan tensions is a particular signal of trust from the West Wing, which has intensified its focus on the relationship with Beijing ahead of Biden’s November trip to Asia.

The White House is engaged in a high-stakes balancing act: The U.S. seeks to reassure allies in the region alarmed by China’s increasingly expansionist rhetoric and actions, while also maintaining a partnership with Beijing to avoid deepening trade disputes or a pivot toward Russia that could threaten American interests.

Speaking from the windswept deck of the USS Howard — a Navy destroyer stationed in Japan — Harris was largely able to thread the needle. She accused China of “undermining key elements of the international rules-based order” but said the U.S. would deepen its “unofficial” relationship with Taiwan, “consistent with our longstanding policy” — demonstrating a deft touch with ambiguity that has often seemed to elude Biden.

The trip also showed that while Harris struggles to gain political traction at home, she is regarded as a trailblazing icon overseas. At Abe’s funeral, she was one of just a handful of women in attendance — a female leader in a sea of men in black suits.

The same was true during a meeting with Japanese business leaders, where Harris — the lone woman at the table — spoke about the benefits of a new U.S. law for foreign semiconductor manufacturers.

Pictures of Harris meeting with leaders were splashed across the front pages of Japanese newspapers, and an announcement that she planned to visit the Philippines later this year garnered significant coverage.

North Korea met Harris’s trip to the DMZ with a response that seemed to betray that Pyongyang, at least, regarded her visit as momentous. Kim Jong-Un’s regime launched three short-range missiles into the waters east of the country in the days ahead of the vice president’s arrival, adding two more after she left for good measure.