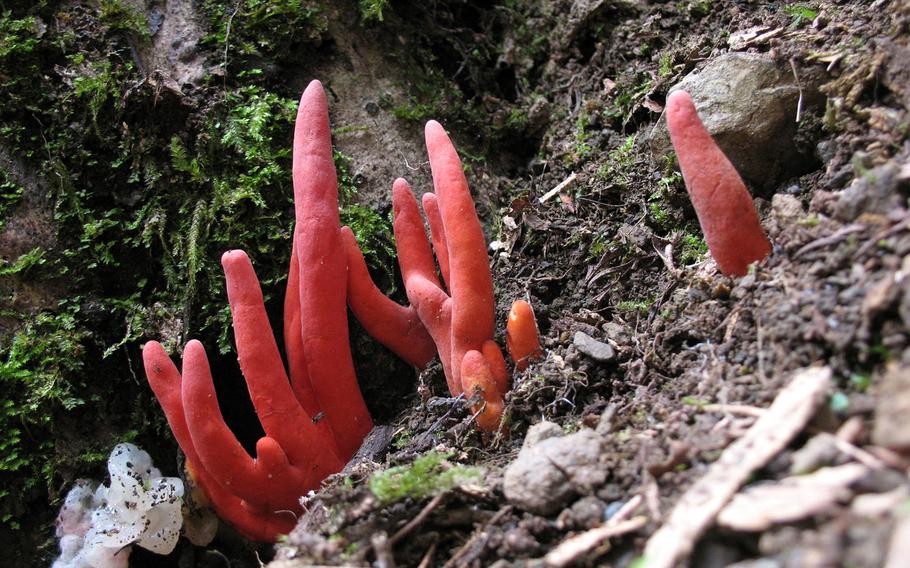 YOKOTA AIR BASE, Japan — The world’s second-deadliest fungus, known in Japan as kaentake, or “fire mushroom,” has been spotted at a park in western Tokyo that’s not far from a popular U.S. military recreation area.

The highly toxic bright-red fungus — also called Podostroma cornu-damae, or poison fire coral — grows on dead trees, causes severe skin inflammation if touched, and is lethal when ingested, according to a safety briefing slide distributed to Yokota units this week by the 374th Civil Engineer Squadron.

“Commonly, symptoms start about 30 minutes after the fungus is eaten and it takes about 48 hours before a person dies,” Tamon Fukazawa of the squadron’s environmental element told Stars and Stripes by email Tuesday.

Just touching a fire mushroom can cause a host of issues, according to the squadron’s safety slide. These include severe itching, sores, red skin, skin shedding, distortion of senses, loss of muscle coordination, nausea and vomiting, diarrhea, nose and throat pain, cough, sneezing, difficulty breathing, wheezing, spitting up blood and bleeding disorders.

Ingesting the fungus, which is prevalent in Japan, China and Korea, but has recently popped up in Australia, can result in weakness, shock and death.

“There is no anti-toxin,” the safety slide said. “[Medical staff] will make you as comfortable as possible, but it will be excruciatingly painful.”

The fungus is typically found on dead, diseased trees during late summer and fall, its peak growing season, according to the slide.

Tama city, where fire mushrooms were spotted sprouting last month, notified its residents to look out for the fungus on Aug. 23, Fukazawa said. The area — about 14 miles from Yokota and 12 miles from Camp Zama — is home to the Tama Hills Recreation Area, a U.S. military-run facility popular for its golf course, horseback riding trails and rental cabins.

Those who think they’ve been exposed to a fire mushroom should remove any clothing that may have touched the fungus, according to the safety slide.

“Try not to touch your head — cut the clothing off if you can’t avoid touching nose/mouth,” it said. “Wash affected areas with lots of soap and water. Remove contact lenses and put with contaminated clothing. Wash eyeglasses or anything you might have touched.”

Rubber gloves or tongs should be used to place the items in a plastic bag that can be sealed, according to the squadron.

“Double bag that and call the local health department right away,” it said.

Those with severe symptoms should call emergency services, the safety slide said.

“Don’t let them touch you without double gloves and don’t dispose of the contaminated material yourself,” it added.