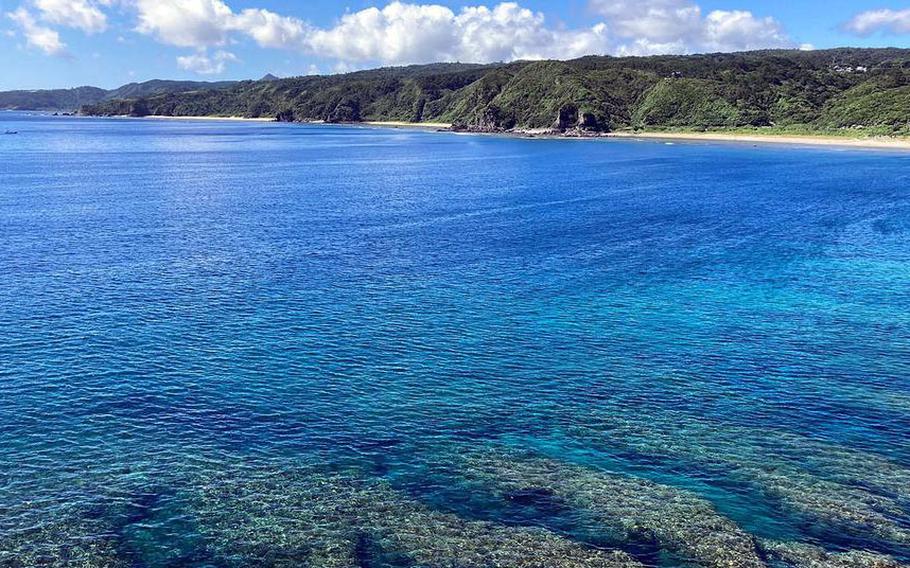 The beach at Kunigami Village, on the northeastern tip of Okinawa. (Stars and Stripes)

The search for the airman, who has not been identified, continued Monday with boats and aircraft from the U.S. military, boats from Japan’s 11th Regional Coast Guard and onshore by Kunigami fire department and local police, a Kunigami fire spokesman said by phone that day.

The missing airman was one of six Americans snorkeling on Saturday around an offshore reef near the mouth of the Ie River in Sosu, 18th Wing spokesman Staff Sgt. Kyle Johnson told Stars and Stripes by phone Monday afternoon. Three were pulled away from the group by the current before the waves separated them, he said.

Coast guard officials dispatched a helicopter from their base in Naha after receiving a distress call at 3:30 p.m., a spokesman said Sunday.

A pair of Japanese swimmers went after the three service members using surfboards and floats, the coast guard spokesman said. A 20-year-old man and a 19-year-old woman, both assigned to Kadena, were recovered and received aid from their rescuers.

The two Americans and their Japanese rescuers were plucked from the sea by the coast guard helicopter at 4:50 p.m., the spokesman said. A search for the missing airman then began immediately.

The two Americans were taken to U.S. Naval Hospital Okinawa at Camp Foster, where they were medically cleared and released, the 18th Wing statement said.

The search is expected to continue Tuesday, Johnson said.