People are fleeing Puerto Rico, Guam and every other US territory. What gives? 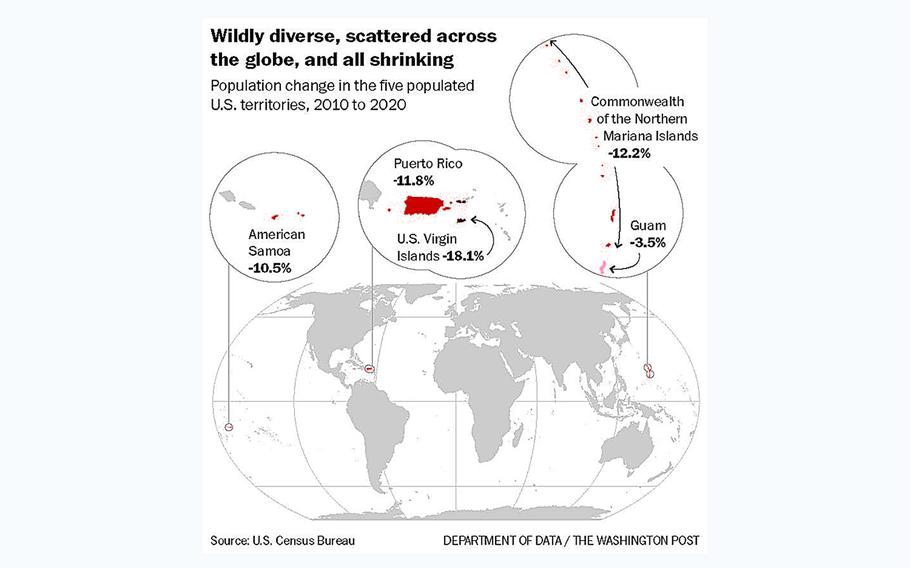 For much of the postwar era, America's territories thrived. Remnants of the age of imperialism, the five far-flung Caribbean and Pacific outposts added residents faster than most states. But the 2020 Census revealed a troubling turn: Every territory is now shrinking, losing population faster than any state.

The synchronized swoon flummoxed us. They appear to have so little in common!

The largest U.S. territory, Puerto Rico, has 3.3 million people and Spanish and West Indian traditions tracing back to Columbus. The nearby U.S. Virgin Islands (population 87,000) were previously settled by Denmark. Over in the Pacific between Japan and Australia, Guam (pop. 154,000) and the Northern Mariana Islands (pop. 47,000) share Chamorro heritage and tourist economies oriented toward East Asia. And American Samoa (pop. 50,000), in the heart of Polynesia, still employs a communal system of land ownership and lies closer to New Zealand than Hawaii.

Their population collapse also seems uniquely American. From 2010 to 2020, the population plummeted by 18 percent in the U.S. Virgin Islands while the British Virgin Islands gained 9 percent. Over the same period, American Samoa lost 11 percent while independent Samoa gained 7 percent.

What's going on? Why are people fleeing the distant vestiges of America's global empire?

Good data remains elusive. The government rarely gives the territories equal coverage in its headline economic and demographic releases. Legislation introduced in July by Rep. Raúl M. Grijalva (D-Ariz.) and the territories' nonvoting delegates would push agencies to fill those data gaps, but it has yet to truly begin the arduous journey through Congress.

So, we picked up the phone. Talking with locals, officials and experts over the past few months, we eventually came to a simple - perhaps overly simple - conclusion:

The island territories, even the most developed ones, have much in common with America's rural areas. Their problems are rural problems, supercharged by migration and tax policy. And, of course, by distance from the nation's population centers.

The population loss in the territories came as rural America snapped a four-decade population growth streak and started shrinking. The decline stemmed from familiar rural culprits: declining manufacturing, lack of health care, falling birthrates, brain drain and climate change. Even Puerto Rico's storied capital, San Juan, might have more in common with a faded Rust Belt hub like Detroit than with a coastal "superstar city."

Like many rural areas, the islands are trapped in a vicious cycle. As people lose their jobs or move away, tax revenue falls. Without that revenue, the territories can't provide the same services. The lack of services and amenities drives more residents away, those residents stop paying taxes, and the cycle accelerates.

But what set off the cycle? What turned decades of growth into decline?

Each island is different, but when we asked for the broadest factors, economists pointed to manufacturing. The islands' struggles came as China squashed rural factories everywhere. And the territories were hit unusually hard because the flood of cheap Chinese goods came at the precise moment when an accident of history made the islands uniquely vulnerable. 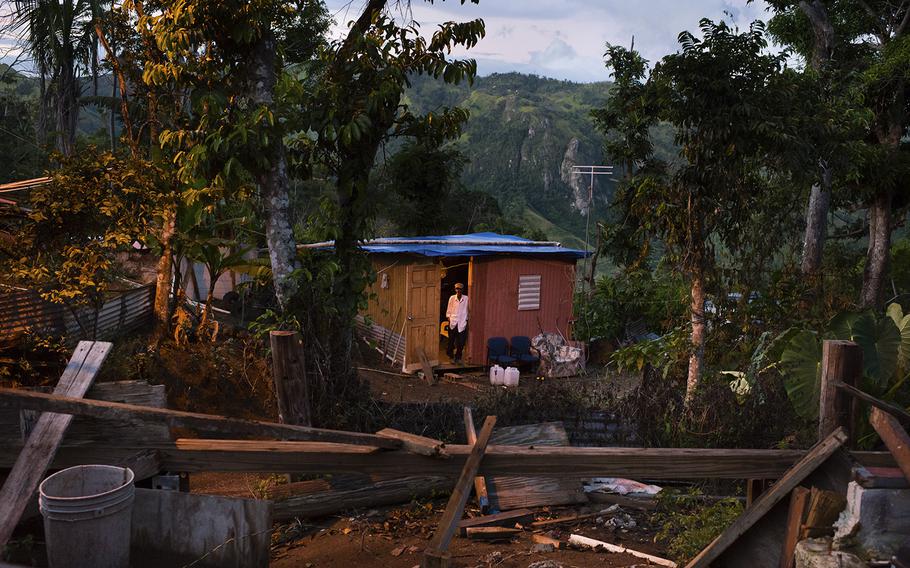 As the sun sets, Carlos Fernandez, 90, stands in the doorway of his shack, down a steep, winding road on a remote mountainside in Villalba, Puerto Rico. (Sarah L. Voisin/Washington Post)

Starting in the 1960s or even earlier, U.S. and territorial officials used aggressive tax incentives to lure factories. It worked. Global industries reshaped the islands: There are pharmaceutical factories in Puerto Rico, textile factories in the Northern Marianas, oil refineries in the Virgin Islands and tuna-packing factories in American Samoa.

But after crackdowns on what critics called corporate welfare during the Clinton administration and the years that followed, most of those tax breaks disappeared. The most prominent of them expired just as Chinese factories were hitting their stride.

While not all policymakers agree, economists such as Zadia Feliciano of Queens College, City University of New York, say textile, footwear and electronics manufacturers on the islands depended on those tax breaks and couldn't weather China's rise without them. Her recent analysis with Meng-Ting Chen of Soochow University in Taiwan found that the phasing-out of one of the biggest tax credits, Section 936 of the Internal Revenue Code, from 1996 to 2006 explains at least half of the decline in Puerto Rico's pharmaceutical industry since 1995.

"The declining population of Puerto Rico in part is due to the economic crisis created by the elimination of Section 936," Feliciano said.

The economic struggles have accelerated brain drain on the islands, as the young and ambitious leave to attend school or join the U.S. military. As with rural kids seeking their fortune in cities, the islanders often put down roots on the mainland, where their college degrees and other experience are far more remunerative. The islands just don't have many high-paying opportunities for the educated.

"It's really troubling for our middle class and our students who graduate here," said Roseann Jones, a University of Guam economist who has spent the past 25 years on the island. "They're beginning to say this is a very challenging place economically to build and raise a family, to commit to."

The exodus of the best and brightest makes the islands less attractive to companies looking to relocate, which leads to fewer well-paying jobs, which pushes even more skilled graduates to leave.

"The ambitious, well-prepared kids, they go to college on the mainland and they rarely come back," said Mark Wenner, former chief economist at the USVI Office of Management and Budget. "And then you have a mass of young people that are not well prepared due to the low-quality public education system. . . . The only option for many is basically to go the military or to migrate to the mainland."

Brain drain has long plagued the islands. But as birthrates have fallen and death rates rise, it hits differently. Populations no longer can count on enough new babies to counter the steady outflow of young adults. Indeed, the birthrate in the territories is perilously close to falling below the rate of replacement. That's probably already happened in the Virgin Islands, American Samoa and Puerto Rico, which has one of the lowest fertility rates in the world. At current rates of decline, the other two Pacific territories will soon join them.

The islands' rising death rates are tied to an aging population living in health-care deserts. Mainland rural Americans often are forced to travel hundreds of miles to get basic care. For Americans in the territories, hundreds of miles can easily become thousands.

Medical facilities on the islands often can't provide advanced care, forcing residents to travel to the mainland United States or foreign countries. For example, a 2019 federal report found that the only hospital in American Samoa was "in a state of failure due to age, environmental exposure, and lack of preventative maintenance."

Like most other territorial residents, American Samoans are not eligible for Medicaid, the federal health program for the poor, or Supplemental Security Income, which pays monthly benefits to the elderly and disabled, unless they go to the mainland - a surprising disparity recently upheld by the U.S. Supreme Court. (Thanks to a quirk of history, residents of the Northern Marianas can get SSI.)

As their population and economic growth have sputtered, many communities in this fast-oxidizing, globe-spanning island Rust Belt have turned to the only industry left to them: tourism. But service-industry work doesn't pay nearly as well as factories, and the influx of tourists can drive up the cost of living for locals.

"We have this greater and greater trend of people saying, 'I can't find work here, I can't find a future here,'" Jones said of Guam. "'I can't continue to pay $15 a gallon for fresh milk.'"

Tourism is also far more susceptible to external shocks such as hurricanes, financial crises and global pandemics. Even by the standards of rural America, starved by drought and ravaged by wildfire, the islands have had a rough run.

The 2020 Census - and the pandemic - came as the islands struggled to recover from Hurricanes Irma and Maria, two of the most expensive storms in history. In 2017, they devastated the Virgin Islands and Puerto Rico twice in a matter of weeks, leaving more than 3,000 dead and demolishing important health, education and tourist infrastructure - some of which still hasn't been rebuilt.

Simply rebuilding what was lost in these storms makes increasingly less sense as the specter of climate change looms. All the territories are exposed to the peril of rising sea levels, changing weather patterns and intensifying hurricane and typhoon seasons.

"The climate risk is becoming increasingly more significant, more severe," said Mark Zandi, chief economist at Moody's Analytics and a longtime follower of the economic travails of Puerto Rico and the other territories. "I suspect that we'll see more of this migration because of the climate problems these islands face."

And in the islands, migration is made uniquely appealing by a circumstance that exists nowhere else in the world: American citizenship (or in the case of American Samoa, residency).

Typically U.S. citizens by birth, territorial residents are nonetheless stuck in constitutional limbo, disadvantaged by complicated, more-than-a-century-old legal decisions that deny them certain rights and benefits because they are "fierce, savage and restless" people who cannot be governed by "Anglo-Saxon principles."

But there's a simple way to break out of that limbo: They can move to the mainland. The moment a territorial citizen steps off a plane in Florida or California, their vote counts in federal elections and they're eligible for every federal benefit.

Population loss in the territories has, not surprisingly, coincided with a sharp rise in the population of territory-born folks in the 50 states (and D.C.). In every territory, at least a third of U.S. residents born there are now living in the states. If you count people with island ancestry who were born in the states (instead of their homeland), the magnitude of the loss becomes even clearer: There are now more people of Puerto Rican ancestry living in the states than there are people living in Puerto Rico, total.

"It's not hard for residents in the territories to leave these days," Zandi said. "They have family members and friends that are here in the U.S., and if they want to move, they know exactly where they're going to go, at least at first."

Each time an islander moves to the mainland, the negative feedback loop spins a tiny bit faster, said Bernard Yaros, a Moody's Analytics economist who has covered Puerto Rico for eight years. "The population was declining, that reduced the tax base for the public sector, which then was unable to provide adequate public amenities. And then this reduction in the quality of public services contributed to further frustration and out-migration.

"In economics, demography is destiny," Yaros said. "It's very tough to have a fast-growing economy if your population is shrinking."