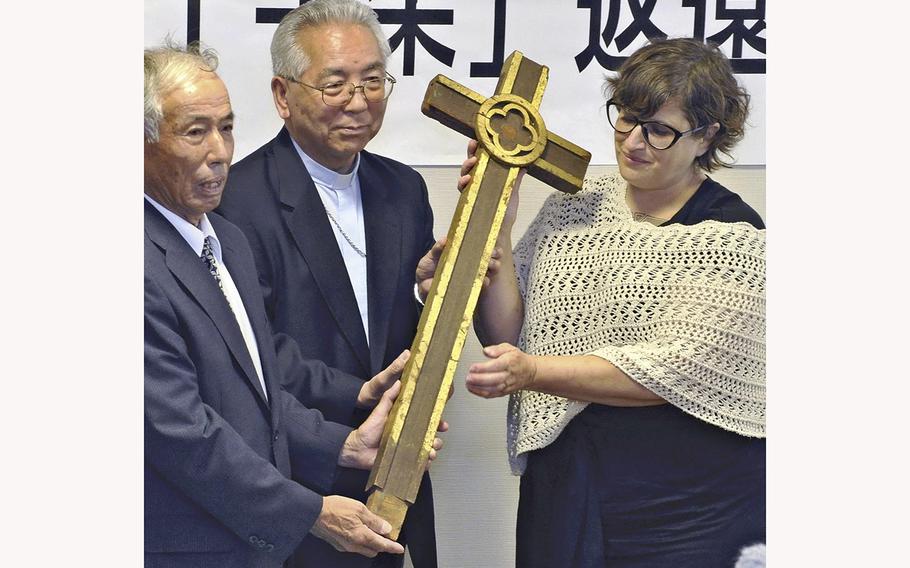 The atomic-bombed cross is returned from Wilmington University to the then-archbishop of Nagasaki in August 2019. (The Yomiuri Shimbun)

NAGASAKI — Urakami Cathedral in Nagasaki preserves a cross that was exposed to the atomic bombing of Nagasaki in 1945. The cross was long-believed to be missing until three years ago, when it was returned by a U.S. university. Church officials will present a replica of the cross to the university to express their gratitude.

In October 1945, two months after the bombing, the "bombed cross" was found by a U.S. serviceman in the debris of the devastated cathedral. After receiving permission from the bishop of Nagasaki, he took the cross home with him. In 1982, he donated it to Wilmington University, which put it on display. The cross was returned to the Urakami church in 2019 through the mediation of a professor at another university.

Urakami church officials and others plan to travel to the United States in late September to deliver the replica and will also interact with U.S. peace groups.