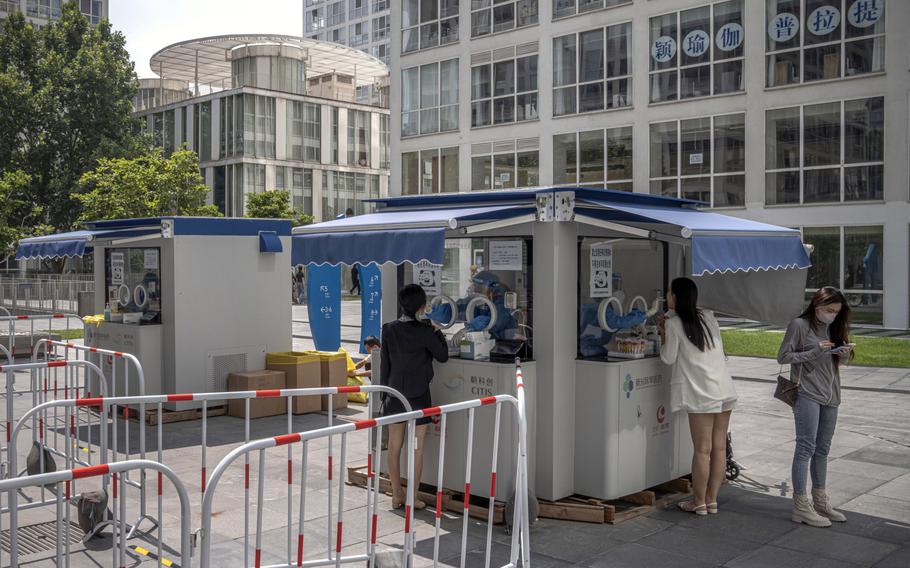 Residents at a coronavirus testing booth in Beijing, China, on Aug. 30, 2022. (Bloomberg)

The World Health Organization chief’s comment that the end of the pandemic is within reach sparked lively online debate -- and some censorship -- in China, the only major country still trying to stop the spread of the virus.

WHO Director General Tedros Adhanom Ghebreyesus said Wednesday that “we have never been in a better position to end the pandemic. We are not there yet, but the end is in sight.”

China Newsweek and popular online media outlet Guancha.cn reported on Tedros’s remark and shared videos on social media platform Weibo, but those were removed in the afternoon. A hashtag on Tedros’s comments that gathered some 4.5 million views also appeared to have been removed, and Chinese media disabled the comment function on Weibo posts sharing the news.

Discussions still flowed in the vibrant but closed-off world of China’s internet, with many saying that the shift Tedros spoke of wouldn’t apply to them. China continues to address covid pretty much as it did at the start of the pandemic in early 2020 -- trying to cut off transmission and wipe out the pathogen with intensive restrictions.

“Everything should be directed to the National Health Commission,” one person joked, referring to the department that carries out President Xi Jingping’s covid strategy, rather than the WHO.

“Chinese people are living such a happy life under the distorted Covid Zero policy,” another remarked.

The Chinese government heavily censors the internet and social media. Covid Zero is inextricably bound to Xi, making it particularly sensitive. Beijing defends the strategy by saying it saves lives, while criticizing the U.S. for its more than 1 million covid deaths.

All content from the Weibo account of Lao Dongyan, a law professor at Tsinghua University known for being outspoken on social issues, was removed as of Thursday. While there was no clear reason, she has criticized a range of issues from nationalism to Covid Zero enforcement, including emergency responders to an earthquake in Sichuan province having to be tested as they raced to the scene.

Beijing is enforcing an even tougher version of Covid Zero before a twice-a-decade Communist Party congress due to start on Oct. 16, an event that’s expected to hand Xi more time in power. Areas near the capital have been locked down, testing rules tightened and domestic travel discouraged.

Economists at Goldman Sachs said in a report Tuesday that they didn’t expect Beijing to change tack on virus policy until after the annual National People’s Congress some time in the first half of next year. Other experts have warned Covid Zero could be kept in place long term, perhaps even years.