Hundreds of Filipino workers are marooned at a U.S. military base on an island in the Indian Ocean because of a dispute between their employer, a major American contractor, and the Philippine government over their wages, according to employees and Philippine officials.

The Philippine government alleges that Kellogg Brown & Root, also known as KBR, has canceled regular charter flights from the Camp Thunder Cove base on Diego Garcia to the Philippines since the start of this year as a form of “emotional blackmail.” Philippine officials, who have told KBR that it must raise employee pay to meet the U.S. federal minimum wage rate, says the company is pressuring employees to continue working at current wages.

The suspension of chartered flights, however, may not be the only, or even main, factor keeping some Filipino workers on Diego Garcia, located more than 1,000 miles off the southern tip of India. Several Filipino employees said they were reluctant to leave the island for home visits, fearing that either the company or their own government would prevent them from returning to their jobs if the wage disagreement was not settled.

In statements to The Washington Post, KBR denied that the suspension of flights was linked in any way to the wage dispute and said it initially “canceled the charter flights at the request of the U.S. government to help prevent COVID-19’s spread.” In a subsequent statement, the company said there have been no chartered flights since late last year due to a lack of demand from workers wanting to travel.

KBR had previously chartered flights about every three months that transported between 200 and 250 workers between the base and the Philippines. Workers said in interviews that KBR representatives told them the suspension of charter flights this year is because of the wage dispute.

More than 1,200 civilian employees at the base had been unable to travel earlier in the pandemic because of coronavirus flight restrictions, and many have not left Diego Garcia for more than three years, workers said. The company said that within the past two months, 20 employees have left the island on military flights and 10 have so far returned.

Families have been divided. One worker, who spoke on the condition of anonymity fearing retribution, said he has never met his daughter, who turned 3 earlier this year. “I’ve only ever seen her on video calls,” he said. Another KBR employee said she has not seen her 3-year-old since the child was a few months old.

“KBR has been preventing them from returning to the Philippines to be with their families unless they sign an extension of their contract based on the old minimum wage rate,” said Bernard Olalia, undersecretary of the Philippine Department of Migrant Workers. “In effect, KBR is employing emotional blackmail by making their return to the Philippines conditional on their agreeing to an onerous contract. Not only is this unlawful, but it also violates the basic rights of these Filipino workers.”

Philip Ivy, KBR’s vice president of global marketing and communications, rejected the accusation. “Charter flights never had anything whatsoever to do with Philippine wage requirements, and if anyone were told that, it would have been inaccurate. We know of no employee who was told this,” he said.

Ivy said that military flights connecting the base — a highly strategic American outpost that supports U.S. Navy and Air Force operations — with Japan and Bahrain have continued to operate and that Filipino employees are able to take these flights, with the cost of their onward travel to the Philippines covered by KBR. “When the availability of seats on military flights is insufficient and the volume of passengers both ways warrants a charter flight, one is scheduled,” he said. He said new employees are offered a class on how to request travel and that workers can also contact a travel office with questions.

But three employees said in interviews that seats for contract workers on military flights are scarce and that KBR has not offered clear information about requesting a seat. There are no commercial flights serving Diego Garcia.

“It didn’t have to go this far,” said a 33-year-old KBR worker on the island who also spoke on the condition of anonymity fearing he may lose his job. “We are stuck here because of the minimum wage issue. Everyone is upset, but we don’t have a choice.”

Another KBR employee said the wage dispute is keeping the company from being able to hire new workers. “If the charter flights were running, people will leave and this could impact their operations. That is what they are afraid of,” said the employee, who also spoke on the condition of anonymity fearing retribution.

Tensions between the Houston-based contractor and its employees have been rising since the Philippine government demanded in October 2020 that companies on the base pay their Filipino workers the U.S. federal minimum wage of $7.25 per hour. The Philippine government sets minimum wages for its citizens who work abroad via agreements with employers, job recruiters and other governments, and at times bans migration to countries it considers to be mistreating its nationals.

KBR, which employs more than 1,200 mostly Filipino workers at Diego Garcia as clerks, warehouse workers and in other semiskilled jobs, kept pay rates unchanged. Many employees have continued to be paid at an hourly rate of about $5.25 per hour, four workers said.

Ivy said KBR is not underpaying its employees and already meets the standard set by the Philippine government. “Minimum total compensation for our Filipino employees exceeds the mandated hourly rate when housing, food, medical coverage and other benefits are added in,” he said in a statement. Nor, he said, do employees have to sign an extension of their existing contract to leave for vacation.

To raise employee pay, Ivy said, “KBR asked the [U.S.] Department of Defense if it would reimburse KBR for the cost of the additional wages and the government declined.”

Cmdr. Katie Cerezo, a public affairs officer for the U.S. Navy, said its contract with KBR is a fixed-price agreement. She said the Navy values the work done by Filipinos at Diego Garcia and that the specifics of employment are between KBR and its workers.

While the vast majority of KBR’s employees on Diego Garcia have traditionally been Filipino, the company is now trying to hire workers of other nationalities, according to its statement.

KBR employees said their employment is vital for supporting their families in the Philippines and that losing their jobs would be devastating.

While the workers are eager for higher pay, they said that Diego Garcia is a desirable place to work and live. They said their accommodations are good and they can spend their days off using sports facilities and going to the beaches.

Diego Garcia is the largest island in the Chagos Archipelago, a British territory that has been leased to the United States for the past five decades solely for operating a military base. Strategically located due to its proximity to the Middle East, Africa, and South Asia, Diego Garcia serves as a naval logistics, communications and refueling hub. Aircraft operating from Diego Garcia have been active in Iraq and Afghanistan.

The islands’ native population, the Chagossians, were expelled by British and U.S. forces in the late 1960s and early 1970s to clear the way for development of the military base. The British government has barred the Chagossians from returning, citing defense and security interests.

But the lack of a local population has meant that contractors for the U.S. Department of Defense have had to rely on overseas workers, primarily recruiting them from the Philippines. 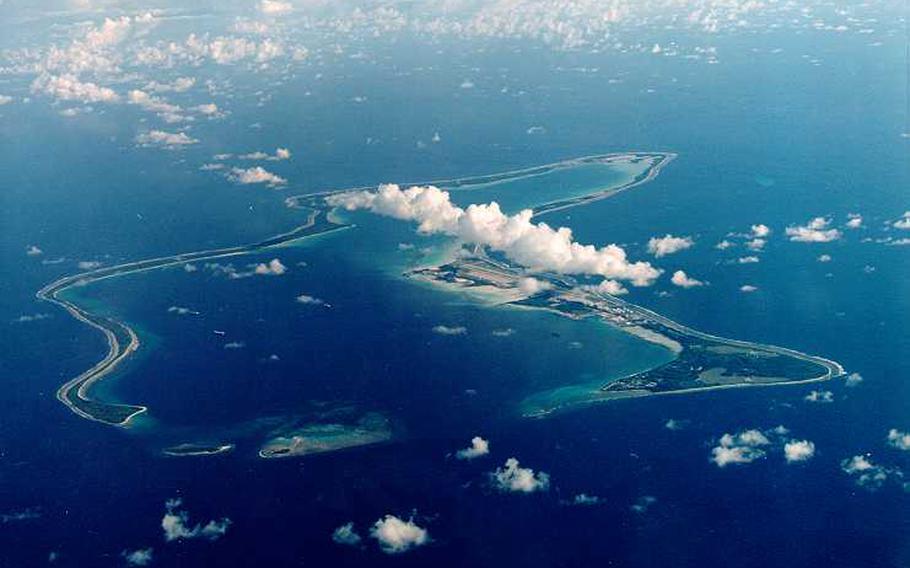 The island of Diego Garcia. (Department of Defense)