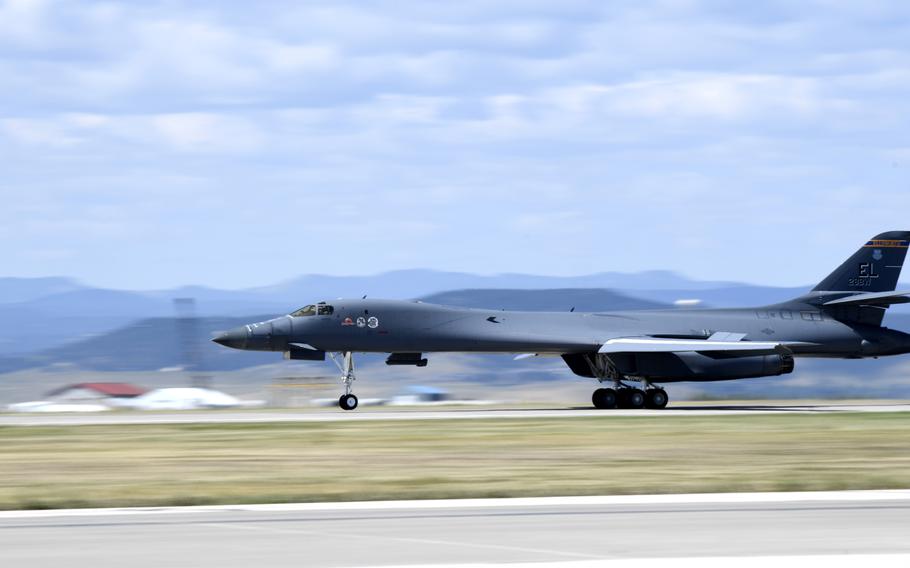 A B-1B Lancer assigned to the 28th Bomb Wing lands at Ellsworth Air Force Base, S.D., Aug. 20, 2022, after completing a long-duration mission to the Indo-Pacific region.  (Levi Rowse/U.S. Air Force)

YOKOTA AIR BASE, Japan – A B-1B Lancer bomber diverted to Andersen Air Force Base, Guam, after an air refueling incident involving a KC-135 Stratotanker over the weekend, according to Pacific Air Forces.

The Stratotanker, an aerial refueler, belongs to the 18th Wing at Kadena Air Base, Okinawa; the Lancer is attached to the 28th Bomb Wing at Ellsworth Air Force Base, S.D., PACAF spokesman Capt. Brandon Romano told Stars and Stripes in an email Wednesday.

“The B-1 landed at Andersen AFB and the KC-135 landed at Yokota AB without incident,” he said. “No injuries were reported.” Yokota Air Base is in western Tokyo.

An investigation will determine the extent of damage to both military aircraft, said Romano, who did not provide details of the incident.

During bomber task force missions, Air Force crews fly throughout the world at a moment's notice “to help maintain global stability and security while enabling units to become familiar with operations in different regions,” according to the Air Force website.

The missions have become commonplace in the Indo-Pacific as part of U.S. demonstrations in response to China’s military asserting itself in the region.

Photographs released by the 28th Bomb Wing show B-1Bs taking off from Ellsworth on Aug. 19 and returning the next day from a long-duration mission to the Indo-Pacific region.

The refueling incident was described as an “in flight emergency” by 374th Airlift Wing spokesman 1st Lt. Danny Rangel in an email Monday.

Rangel provided no details of the emergency.

An incoming charter aircraft traveling to Yokota was diverted to Narita International Airport in nearby Chiba prefecture as a result, he said.

An investigation will determine the extent of damage to both military aircraft, Romano said.