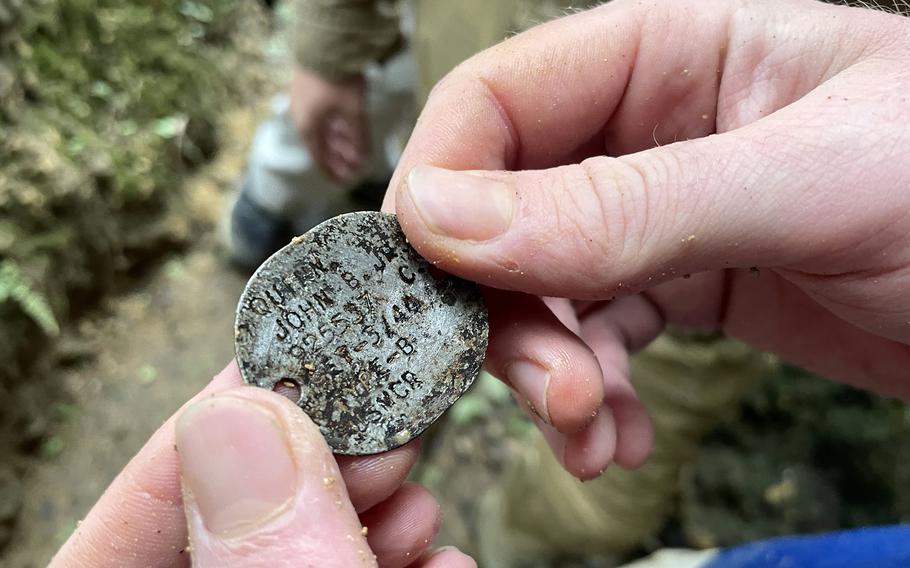 This dog tag belonging to Marine Pfc. John Quinn Jr., was found inside an Okinawa cave along with human remains and other items, Sept. 6, 2022. (Yukari Akatsuka)

ITOMAN, Okinawa – Larry Paleno, 61, had never been outside the United States, but he dropped everything and flew to Okinawa on Friday after learning that a team of volunteers may have discovered the remains of his uncle lost in World War II.

Marine Pfc. John Quinn Jr., was killed June 29, 1945, one week after the Battle of Okinawa ended, when he entered a supposedly cleared cave in Itoman for souvenirs and was ambushed by Japanese soldiers. He died alongside Pvt. John Hartman, who rushed in to save him. The cave was sealed after the Japanese troops refused to surrender.

On the eve of Paleno’s visit, Kuentai-USA, a Japan-based non-governmental organization working to find Quinn and Hartman, unearthed what it thinks are Quinn’s remains. Paleno grew emotional Saturday morning after viewing the spot where his uncle was believed to lie.

“Very surreal; wow,” he said, his voice wavering. “All these volunteers; it’s unbelievable, all the work they’ve done in that cave to find him.”

His efforts took on a greater urgency a year later after his uncle, Gerald Quinn, requested a memorial Mass for his long-lost brother that was attended by dozens of family and friends.

“When I started, nobody knew anything about him; you know, what happened to him, where he was. Every story was different,” Paleno told Stars and Stripes on Saturday.

He said his search picked up steam after stumbling upon the 6th Marine Division’s website. Bill Pierce, a veteran of the battle and then public affairs director for the organization, helped Paleno request Quinn’s service record and casualty file from the National Archives. In those files, Paleno found the coordinates for the cave on Okinawa. 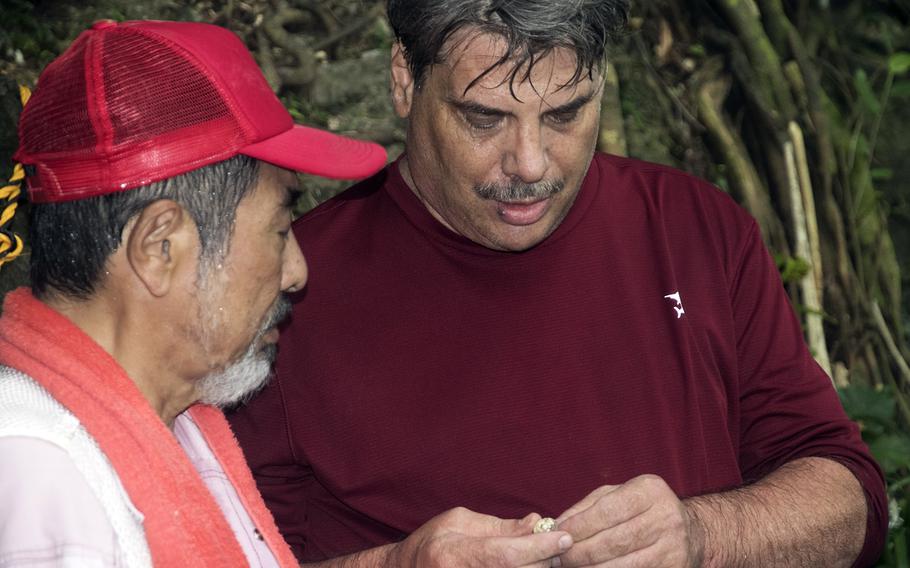 Larry Paleno, right, of Kings Park, N.Y., gazes at a ring that may have belonged to his uncle, Marine Pfc. John Quinn Jr., outside a cave in Itoman, Okinawa, Sept. 10, 2022. (Matthew M. Burke/Stars and Stripes) 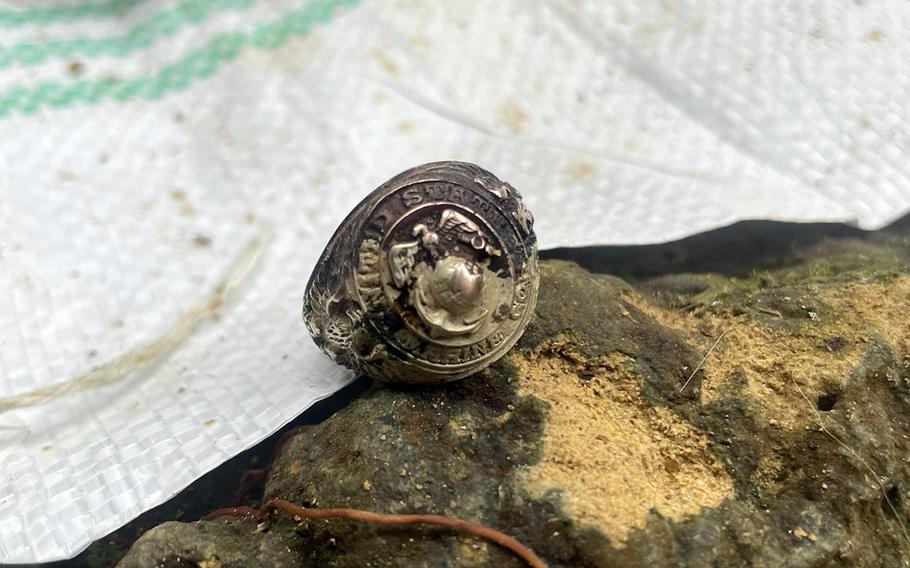 This ring, which may have belonged to Marine Pfc. John Quinn Jr., was found inside an Okinawa cave along with human remains and other items, Sept. 6, 2022. (Yukari Akatsuka) 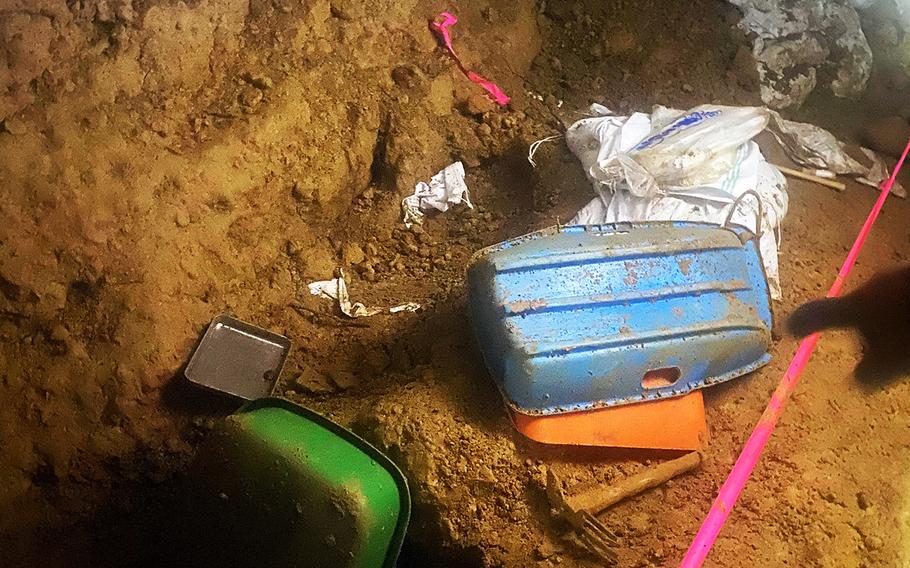 This area inside an Okinawa cave may hold the remains of Marine Pfc. John Quinn Jr., who was killed June 29, 1945, one week after the Battle of Okinawa. (Izabela Ishikawa) 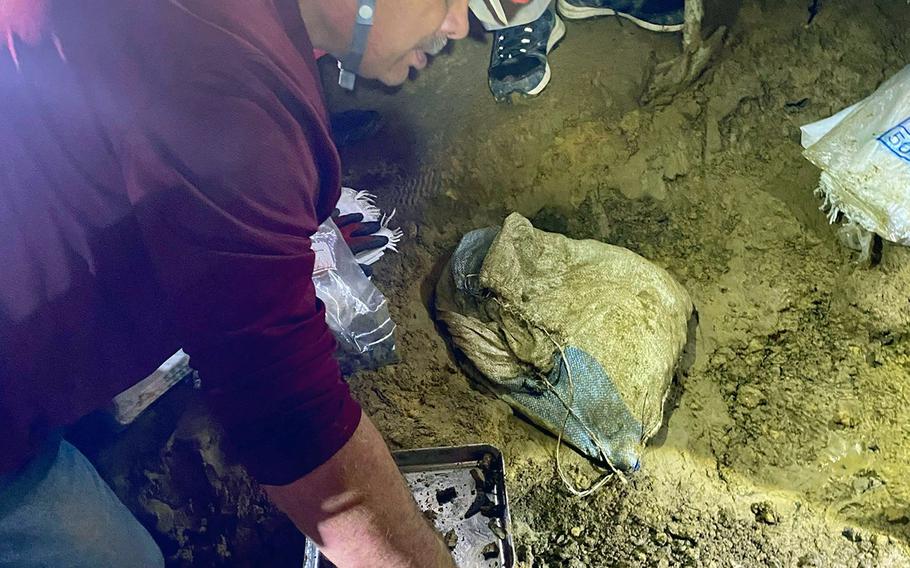 Larry Paleno on Sept. 10, 2022, touches the area inside an Okinawa cave where the remains of his uncle, Marine Pfc. John Quinn Jr., may have been found by the Japanese non-governmental organization Kuentai-USA. (Izabela Ishikawa)

In 2011, retired Marine Maj. Kerry Quinn, no relation to Pfc. Quinn, contacted the family to return one of the missing Marine’s dog tags that had been found in the cave. Paleno traveled to Washington, D.C., the following year to accept it and met then-Marine Corps Commandant Gen. James Amos.

About six years later, Paleno, on his way to work one day aboard the subway, Googled his uncle’s name. He was shocked to learn that Kuentai had begun looking for Quinn. He reached out to the group’s secretary general, Yukari Akatsuka, and started planning for a trip.

“The pandemic hit, and we couldn't go,” he said.

Paleno lost touch with the group in the two years that followed. Kuentai went back to excavate the cave in April. Paleno reconnected with the group during a second dig in July and again started to plan a visit.

“If I don’t come now, I’ll never come,” he recalled. “It was something that I had to come see.”

On Sept. 5, they were trying to clear a giant rock that had caved in over the years when Senior Airman Lukas Maschmeier, 23, of the 18th Component Maintenance Squadron at Kadena Air Base, spotted an American-made rubber boot sole. The volunteers agreed to focus their efforts in that area.

The following day, they found another of Quinn’s dog tags, then a Marine Corps ring, a belt buckle, a Marine Corps button and bones and teeth. They paused digging and cordoned off the area to await Paleno’s arrival.

“Now, looking at the outside of that area, it looks like fragments of a skull right there,” Maschmeier said Saturday, describing the discovery as he prepared to reenter the cave. The volunteers also found what looks like a pelvic bone.

“This right here is the fruits of repatriation, literally giving remains and personal effects back to the family,” Maschmeier said. 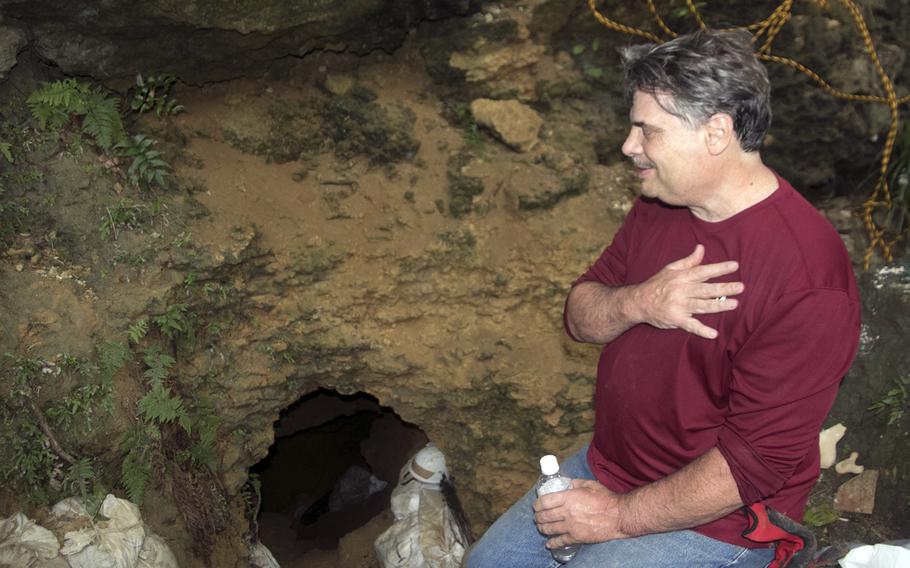 Larry Paleno on Sept. 10, 2022 visits the Itoman cave where his uncle, Marine Pfc. John Quinn Jr., was killed one week after the Battle of Okinawa ended. (Matthew M. Burke/Stars and Stripes)

“It was under a big ol’ rock,” he said. “Nobody ever looked under that rock, and it’s just kind of amazing that we somehow pinpointed that location, and it’s even more amazing that Larry’s here, all the way from New York.”

As Paleno stood outside the cave holding his uncle’s dog tag, tears streamed down his face. Later that day, while recovering what they believe to be Quinn’s remains, Kuentai volunteers also found teeth they believe could belong to Hartman.

On Monday, Paleno accompanied Kuentai to the Okinawa Prefectural Peace Memorial Museum in Mabuni to turn over the recovered remains. He hopes they will be given to the Defense POW/MIA Accounting Agency to identify and return to the family for burial. Quinn still has two siblings who remember him well.

“We wanted to find him and bring him home and bury him with our family and we never thought that would be realized,” Paleno said. “But I have no doubt that that’s him and maybe that will happen someday. I’m so grateful.”