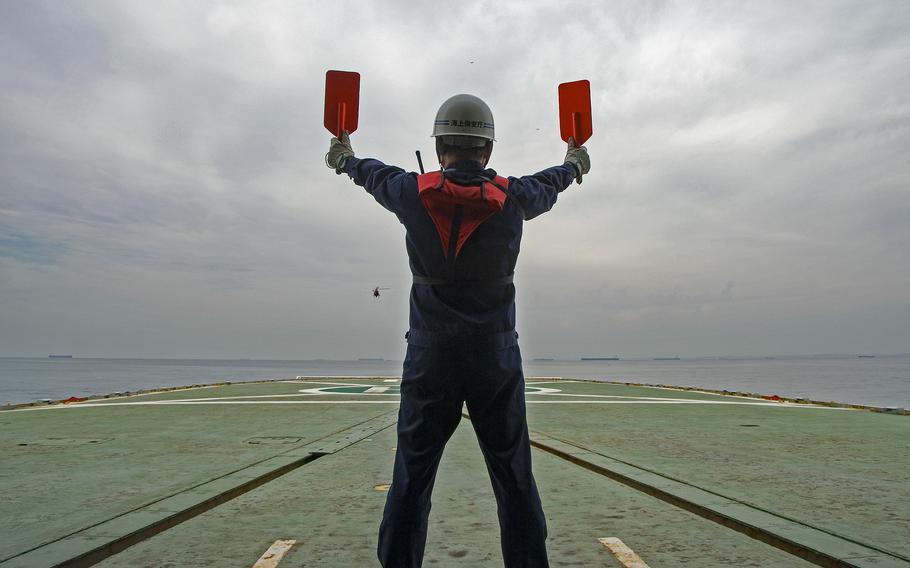 A flight crew onboard the Japanese Coast Guard Cutter Mizuho, prepares to land an HH-65 helicopter, on the Mizuho on Oct. 16, 2007, in Nagoya, Japan. (Jonathan R. Cilley/U.S. Coast Guard)

TOKYO — The government is considering adopting a method of calculating its defense budget that would include the budget for coastal security and other items, as part of its effort to have the defense budget reach 2% of Japan's gross domestic product over the next five years, according to government sources.

This calculation method is the one used by the North Atlantic Treaty Organization, which aims for member countries' defense-related expenditures to be at least 2% of GDP. To compare the defense efforts of member countries, NATO defines items to be included in the defense-related expenditures, such as expenses related to the coast guard, U.N. peacekeeping operations and pensions for veterans, none of which are currently included in Japan's defense expenditures.

According to the sources, the Japanese government has decided that it is appropriate to adopt the NATO standards as a reference for the 2% goal.

Japan's defense budget is about 5.4 trillion yen in the initial budget for the current fiscal year, while the coast guard budget is about 220 billion yen and the cost of veterans' pensions and survivor benefits is about 110 billion yen. If Japan adds up these items and the like by applying the NATO standards, defense-related expenditures will amount to about 6.1 trillion yen or 1.08% of GDP.

The government thinks it may be possible to count expenditures for other ministries' projects as defense-related expenses if they are expected to be used for defense purposes, such as in the space sector.