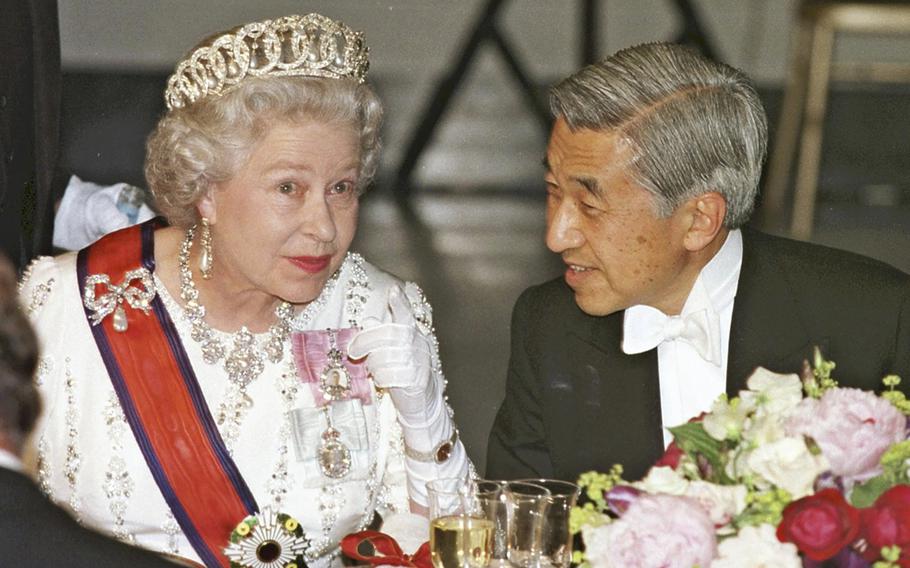 The then Emperor and Queen Elizabeth II chat at a dinner banquet in London during his visit to Britain in May 1998. (Japan News-Yomiuri)

TOKYO — Britain's Queen Elizabeth II, who passed away at 96 on Thursday, had over the years formed a close friendship with members of Japan's Imperial family.

Her friendship with the Emperor Emeritus, 88, in particular, spanned nearly 70 years, during which they both dealt with the scars that British and Japanese people bore from World War II. The strong bond between the two monarchs provided a needed push toward the people of the two countries becoming true friends.

According to the Imperial Household Agency, the Emperor Emeritus and Empress Emerita were deeply saddened by the news of the queen's death. They expressed their gratitude for her friendship over the years and prayed for the repose of her soul.

In 1953, the Emperor Emeritus attended the queen's coronation ceremony. The then crown prince, 19, spoke without an interpreter to the queen, 27, about the events of his journey.

In 1998, the Emperor Emeritus made his first visit to Britain after his accession to the throne. In Britain at that time, many people still harbored bitter feelings against Japan for its role in World War II. A group of Britons taken prisoner during the war by the now-disbanded Imperial Japanese Army protested against the then Emperor of Japan and turned their backs as he rode by in a carriage during a welcome parade in London. 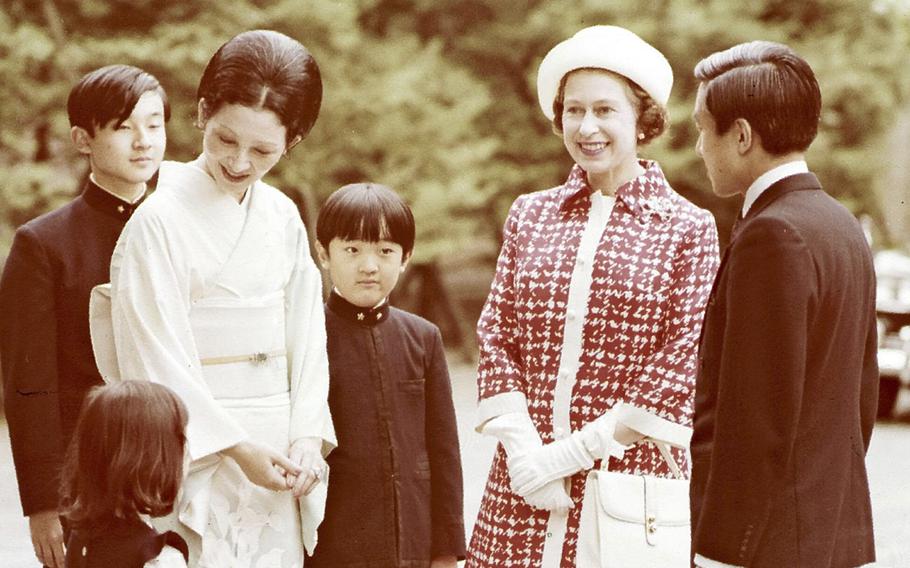 Queen Elizabeth II, during her visit to Japan in May 1975, meets with the Emperor Emeritus, the Empress Emerita and their three children: the current Emperor, Crown Prince Akishino and Sayako Kuroda. (Japan News-Yomiuri)

At the dinner banquet held at Buckingham Palace that evening, the Emperor Emeritus said, "At the thought of the scars of war that people bear, our hearts are filled with deep sorrow and pain."

In response, referring to the long history of bilateral relations, Queen Elizabeth said Britain is no fair-weather friend, but a true friend to Japan.

Her warm reception of the Imperial couple was widely reported in Britain.

In 2012, the Emperor Emeritus visited Britain to attend an event to commemorate the 60th anniversary of Queen Elizabeth's accession to the throne. He had just undergone heart surgery three months earlier and was not in perfect health, but he had been determined to make the trip.

The current Emperor, 62, had also built a close relationship with the queen since her visit to Japan in 1975. He studied in Britain from 1983 to 1985. She gave him a warm reception every time he visited the country, and in a statement released Friday, the Emperor expressed his deep appreciation for her kindness and hospitality on those occasions.

The Emperor had planned to visit Britain for his first trip abroad since his accession to the throne, but the trip was postponed due to the novel coronavirus pandemic. In his statement, he also expressed his sincere gratitude for the queen's invitation to visit her country.