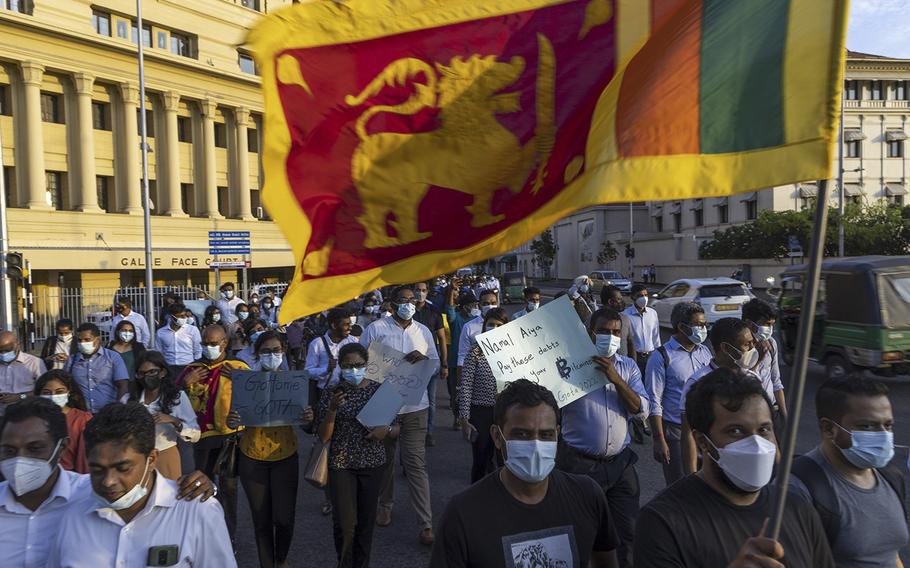 Holders of defaulted Sri Lankan bonds are keeping one eye on the South Asian nation's biggest creditors and the other on an African debt deal for clues as to how the restructuring might play out.

A preliminary $2.9 billion loan deal with the International Monetary Fund announced last week wasn't enough to spark a rebound in the notes. They've been in free-fall since the onset of the pandemic in 2020 and went into default earlier this year amid the worst economic crisis in the country's history.

Now, investor attention turns to China, India and Japan -- Sri Lanka's biggest bilateral creditors. Bondholders want to see how much debt relief those governments, which have key strategic and geopolitical interests over and above their investments, grant the island.

"With private creditors, what the IMF needs is good faith negotiations over reprofiling debt. That is sufficient," said Petar Atanasov, director, co-head of sovereign research &amp; strategy at Gramercy Funds Management. "But for official creditors, the bar is higher, they need specific and explicit guarantees on terms which the IMF considers necessary."

In the past, China has been slow to provide those guarantees, due to its concerns about being underrepresented at the IMF, Atanasov said. "So finding common ground on sovereign debt restructurings where China is a major creditor tends to take time," he said.

For Sri Lankan noteholders, restructuring talks in Zambia may offer some pointers.

The African nation, which became the continent's first pandemic-era sovereign defaulter, needs relief on payments worth $8.4 billion through 2025, estimated at about 90% of its scheduled external debt servicing over the period. China reluctantly co-chaired the committee of official creditors for Zambia, and nine months after a preliminary deal was reached, the IMF approved a $1.3 billion loan for the country.

Sri Lanka's 2030 dollar bonds halved in value in the months after March 2020 as the pandemic set in. They hit a record low of 24 cents on the dollar this July as fuel shortages ground the economy to a halt, and now trade around 30 cents on the dollar. The nation's bonds have lost 40% this year, according to a Bloomberg index.

The number of countries whose dollar bonds trade at distressed levels has more than doubled to 19 this year, with tighter global monetary conditions and Russia's war in Ukraine leading many to predict a wave of sovereign defaults. Bonds from Argentina, Ecuador and El Salvador -- which are current on their debt obligations -- trade near the 30-cent mark.

While the historical average for sovereign restructurings is 52 cents on the dollar, the collapse in the nation's foreign-currency reserves puts it in a worse position than most, according to Carlos de Sousa, a portfolio manager at Vontobel Asset Management in Zurich. JPMorgan Chase strategists including Milo Gunasinghe say recovery values for the long bonds will hover around 35 cents on the dollar.

In order for the IMF to release the financial support, the Sri Lankan government must also win concessions from its private investors. Officials are working with financial and legal advisers on a debt restructuring strategy and intend to make a presentation to the creditors in the coming weeks.

"Investors are hoping that with the IMF's assistance a quick restructuring can happen," said Philip Fielding, co-head for emerging market debt at Mackay Shields UK, which owns Sri Lanka bonds. "But the timeline is dependent how quickly bilateral creditors including China and India agree to a debt deal."