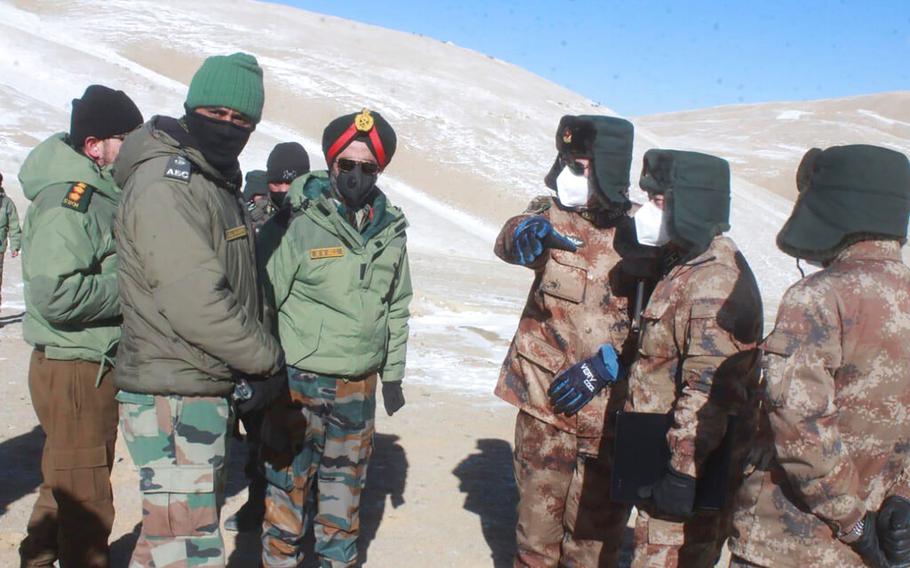 Indian and Chinaese officers meet at Pangong lake region in Ladakh on the India-China border on Feb. 10, 2021. (Indian Army)

Indian and Chinese soldiers have begun to pull back from one more friction point along their disputed Himalayan border following a meeting between top military commanders from both sides, according to India's Defense Ministry.

"According to the consensus reached in the 16th round of India China Corps Commander Level Meeting, the Indian and Chinese troops in the area of Gogra-Hotsprings have begun to disengage," the ministry said Thursday in a statement. The move "is conducive to the peace and tranquility in the border areas." The Chinese Defense Ministry issued a similar statement.

The rollback will be completed by Sept 12, India's Ministry of External Affairs said Friday. "The two sides have agreed to cease forward deployments in this area in a phased, coordinated and verified manner, resulting in the return of the troops of both sides to their respective areas."

Military commanders from both sides have held 16 rounds of talks since the worst clashes in more than forty years between the two nuclear-armed neighbors erupted in the summer of 2020. The site of the latest disengagement is near the area where at least 20 Indian and four Chinese soldiers were killed in June 2020. It's also the most significant effort to diffuse tensions since both sides moved back troops from another disputed border point in August last year.

The last round of dialogue was held in July.

Both sides have moved troops away from a few friction areas along their disputed 3,488 kilometer (2,170 mile) border -- but tens of thousands of soldiers remain deployed toe-to-toe in the hostile terrain.

The disengagement process has been slow and incremental because the two sides cannot agree on the specifics. China isn't in favor of completely pulling back from the friction points but wants both countries to remove additional troops, artillery guns and tanks back to their original bases.

India, which has more mountainous terrain along the border wants the opposite -- disengage troops from friction points leaving only reserve troops and material just behind the disputed areas. For New Delhi moving troops close to the border takes longer than it does for Beijing.