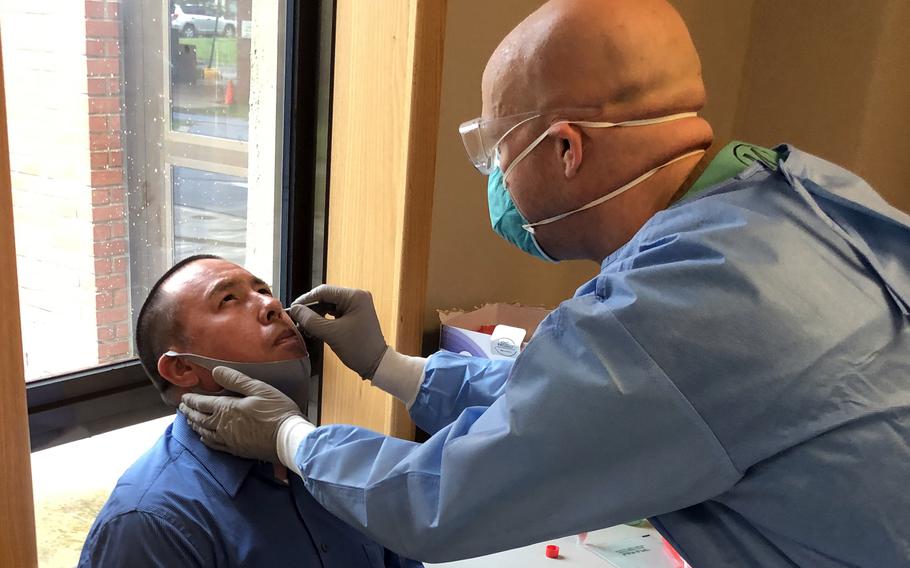 CAMP HUMPHREYS, South Korea — As of Saturday, U.S. military personnel arriving in South Korea are no longer required to show proof of a negative COVID-19 test prior to their travel.

Service members, civilian employees, contractors and their families will not be required to take a PCR test for COVID-19 before they arrive in South Korea from another country, U.S. Forces Korea said in a Facebook post Friday.

The command previously required its personnel to test negative within 48 hours of their departure for South Korea. The change was made “to align with [South Korean] entry requirement changes,” USFK said.

South Korea’s Ministry of Health and Welfare on Wednesday announced it will suspend its pre-travel PCR testing requirement starting Saturday. Beginning Wednesday in Japan, fully vaccinated foreign arrivals are no longer required to show proof of a negative PCR test prior to their departure.

Those arriving in South Korea with the U.S. military are still required to take a PCR test at a military facility upon arrival and will have their travel limited until their results are released, according to USFK’s announcement. New arrivals are encouraged to take a self-administered test for COVID-19 within a week but are not required to do so.

COVID-19 cases in the USFK community have remained steady for a month with little deviation. The command reported 305 positive cases from the past week, according to its most recent update.

USFK counted 319 cases from Aug. 16 to Aug. 22. The command, which rescinded most of its social-distancing restrictions in June, reported 352 cases from Aug. 9 to Aug. 15.

South Korea reported 89,586 cases in the country on Thursday, up from 81,573 on Wednesday, according to the Korea Disease Control and Prevention Agency. Around 150,000 daily cases were recorded in mid-August after health officials warned of a new wave of the BA.5 omicron subvariant.

The country reported its one-day record of 621,328 new cases in March. About 23.4 million people in South Korea have been infected since the beginning of the pandemic in 2020.

Nearly 88% of South Koreans have completed a COVID-19 vaccination series and 87% received a booster dose as of Friday, according to the KDCA. Over 65% of the population have received a second booster.