A decade after Fukushima disaster, foes of nuclear power reconsider 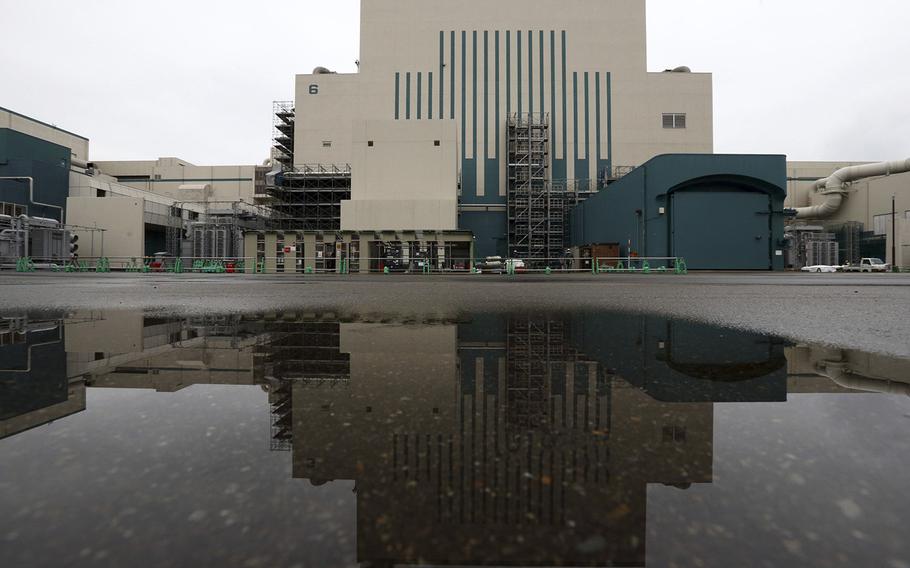 The war in Ukraine is reviving global interest in nuclear power, since gas and oil shortages have reshaped energy markets and driven up fossil fuel prices.

From Japan to Germany to Britain to the United States, leaders of countries that had stopped investing in nuclear power are now considering building new power plants or delaying the closure of existing ones. The shift is especially notable in Japan and Germany, where both turned decisively against nuclear power after the 2011 Fukushima disaster. And it comes even as fears mount about another potential nuclear disaster at Europe's largest nuclear power plant in Ukraine.

Atomic regulators are warily eying Zaporizhzhia, which lies on the front lines of the war in Ukraine. Russian forces have held the power plant there since March. The situation there is increasingly dangerous, nuclear experts say. In recent days, the plant has bounced on and off the grid, and has gone into backup power for cooling its nuclear reactors.

For now, the threat of disaster in Ukraine is not playing a major role in the German or Japanese discussions, even though it has reinforced nuclear skeptics' concerns over the technology.

The global reevaluation shows the extraordinary degree to which the war in Ukraine is reshaping long-held positions about nuclear power. Europe is bracing for a winter of energy shortages in which it may run out of natural gas supplies, potentially forcing it to shut down factories and leave citizens shivering. Worldwide, prices for fossil fuels have skyrocketed since Russia invaded Ukraine in February, with Europe, the United States and a few other countries around the world significantly scaling back their purchases of cheap Russian oil and gas.

German policymakers, meanwhile, are considering prolonging the life of three final nuclear power plants that had been scheduled to go offline at the end of the year. The reprieve would be temporary - just a year or two to get through the current energy crisis - but it would still mark a significant policy reversal that has been a major focus of Germany political life for the last decade.

"As much as I think it is wrong to go into nuclear power, I have to ask myself this question," German Economy Minister Robert Habeck said this weekend at an open government day in Berlin. "It is complex."

Any decision in Germany would have to be approved by Habeck and his Green party - which was founded decades ago to focus on abolishing nuclear power. It remains a core policy position of the party - but so is opposition to Russia's war in Ukraine and a desire to be as strong as possible against the Kremlin.

"We are in really special times," said Dennis Tänzler, a director of Adelphi, a Berlin-based climate think tank. "The bottom line is that German climate and energy policy has been shaped since Fukushima by a cross-party consensus that overall the technological risks, the security risks, are just too great."

Natural gas in Europe is 10 times more expensive than it was a year ago, and the continent is now competing with Japan and other global buyers for supplies of liquified natural gas, driving up prices even more.

Electricity supplies are also especially low in Europe right now, because much of France's nuclear power fleet is offline awaiting safety certifications. Although unrelated to the war in Ukraine, it has exacerbated the overall energy crisis.

Even some prominent nuclear critics appear open to keeping existing plants online for longer, though they oppose building any new ones.

"There's no connection between building nuclear power plants and dealing with the price spike caused by the loss of Russian gas," since they take at least a decade to construct, said Tom Burke, the chairman of E3G, a London-based climate think tank.

But, he said, extending the life of existing reactors could make sense. "If you can do it safely, and it's worthwhile economically to do it, I don't see any good reason not to extend the life of nuclear reactors," he said.

Germany has come under intense pressure from its neighbors to keep its nuclear plants operating. Doing so is meant to address overall shortfalls in energy supplies expected as a result of the halt in purchasing of Russian fossil fuels.

But critics of a possible extension of the life of the German nuclear plants say that keeping them online would not actually solve the needs of the current crisis.

Germany generates about 15% of its electricity from natural gas-fired power plants, but most of those also are used to generate heat, meaning nuclear plants can't fully substitute for them. And given the limits of the transmission grid between Germany and France, critics say, France might not be able to tap all of the excess electricity from the German nuclear plants. An analysis earlier this year by Simon Müller, the director for Germany at Agora Energiewende, a Berlin-based climate think tank, found that extending the life of the nuclear plants would address only 1% of the predicted energy shortfall.

"If we look at an extension of a couple months, you still have the safety issue and there still is the question of proportionality," Müller said. "From a gas perspective, there really is a fairly robust view that this isn't the big thing in the gas system. The discussion really is in the electricity side."

Unlike in Germany, where the focus is on short-term plans to overcome the crisis, leaders in Japan are opening the door to new, long-term investments in nuclear power. Japan is confronting a fuel shortage following Russia's invasion of Ukraine and working to meet its climate goals with carbon-free energy. 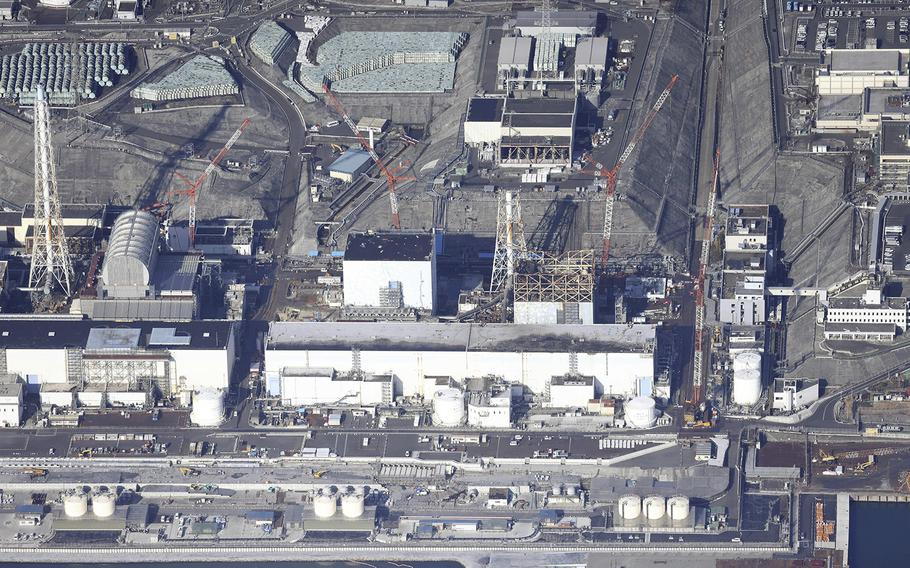 The Fukushima No. 1 nuclear power plant is seen. (Japan News-Yomiuri)

After the devastating 2011 earthquake and tsunami that triggered a meltdown at the Fukushima Daiichi Nuclear Power Plant, the Japanese government had decided against building new nuclear plants. It also limited how long nuclear reactors would be in operation in an effort to reduce risks from aging reactors more prone to accidents. Japan, which is regularly hit by earthquakes, had feared a repeat of the Fukushima disaster, which displaced forced 165,000 people from their homes, mainly due to radiation exposure.

But the country's leaders are now taking nuclear energy more seriously than at any time since the disaster.

In 2019, nuclear power generation accounted for 6% of Japan's electricity supply, according to the Ministry of Economy, Trade and Industry. Japan will now aim to increase that to 20% to 22%. By the summer of 2023, Kishida hopes that the 17 nuclear power plants that have passed the Nuclear Regulation Authority's safety screening will be back online. Kishida has directed nine of them to prepare for electricity shortages this winter. So far, six of the 17 are being used.

Kishida has instructed the government to come up with a detailed plan by the end of the year, with the goal of stabilizing the country's energy supply and "gaining the understanding of the public" on the role of nuclear power in developing a sustainable source of energy. The Ministry of Economy, Trade and Industry is now studying how to safely build next-generation nuclear power plants.

Japan, the world's third largest economy, is heavily dependent on imports for resources - including liquefied natural gas. It has struggled with electricity shortage as it shuts coal-fired plants and decommissions nuclear plants, and has increasingly faced challenges with soaring liquified natural gas prices as Europe buys up global supplies to substitute for gas that is no longer flowing from Russia.

There are signs that a shift in nuclear strategy may now be more palatable to the Japanese public, especially after harsh winter temperatures and a summer heat wave spurred government pleas for residents to conserve energy.

In March, the Japanese government issued its first "electricity shortage alert" after an earthquake in Fukushima hit six thermal plants, and knocked out power for millions of homes, including in Tokyo. The government issued warnings of blackouts and asked households to shut off their power, despite a cold snap that caused temperatures in Tokyo to drop to 35.6 degrees Fahrenheit. A similar warning came in June.

Some recent polls have shown greater support for bringing nuclear plants back online, especially in an effort to stabilize power sources. According to a recent poll that asked about reviving nuclear reactors that have cleared the safety review, 58% were in favor while 39% opposed. The poll, conducted by Japanese newspaper Yomiuri Shimbun and the Waseda University Institute for Advanced Social Sciences, was the first time in five years of public polling by the organizations that supporters outweighed opponents.

Still, nuclear energy remains a divisive and deeply emotional issue in Japan, and the shift is likely to trigger renewed safety concerns. Opponents of Kishida's strategy have said it is possible to reduce the country's carbon footprint without depending on nuclear power, yet the country has not fully explored all options for clean energy sources, including solar, wind, hydro and geothermal power.

Opposition parties in Japan will likely seize on the issue, making it politically difficult for local government leaders to reboot nuclear plants. Given the political sensitivities, power companies may also have concerns about investing in new nuclear plants.

"It is extremely important to secure all options for rebuilding a stable energy supply for the future, while ensuring safety, as we have done in the past," said Hirokazu Matsuno, Japan's chief Cabinet secretary, in a briefing Thursday. "We are aware that there are various opinions on the subject, but we will continue considerations while discussing closely with experts."

Lee reported from Tokyo. The Washington Post's Julia Mio Inuma in Tokyo contributed to this report.