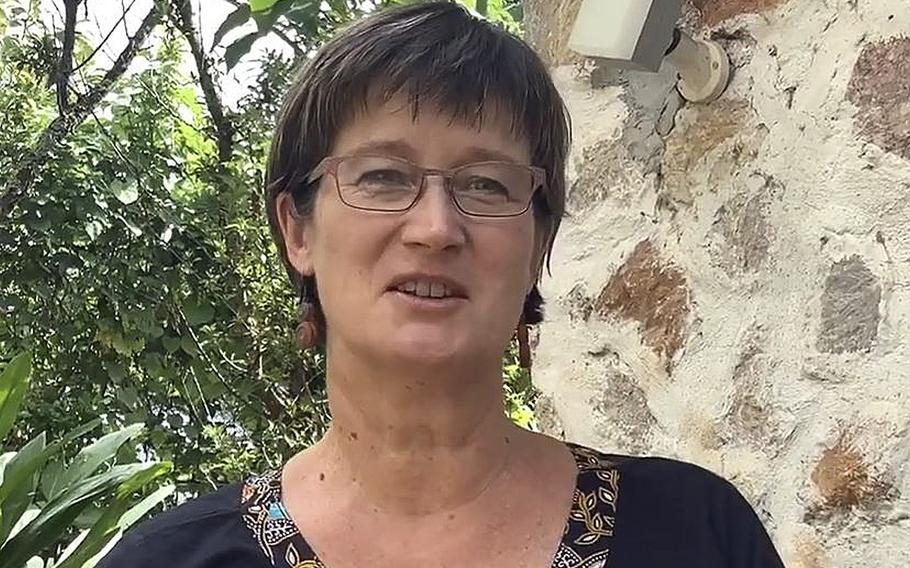 The Myanmar military's recent arrest of a former U.K. ambassador is an example of "hostage diplomacy," activists and opposition politicians say. The detention of the ex-diplomat came as Britain moved to further isolate the Southeast Asian regime.

Vicky Bowman, who served as British ambassador to the nation also known as Burma from 2002 to 2006, was arrested Wednesday evening at her Yangon apartment along with her husband, Htein Lin, a renowned Myanmar artist. They join the 15,000-plus people arrested by the military junta since it seized power in a coup in February 2021, said the Assistance Association for Political Prisoners, a nonprofit that tracks people persecuted by the regime. The figures include at least three other foreigners.

Activists say the detention of Bowman, who is being charged for staying at a different address than the residence that she officially registered, reflects the growing impunity of the military. The junta has brutally crushed opposition over the past year and defied international appeals last month in executing four pro-democracy leaders. Many also see the arrest as an attempt to pressure foreign governments against undermining the regime, including with stronger sanctions.

Other foreigners known to be in detention include Sean Turnell, an Australian economist and longtime adviser to Nobel peace laureate Aung San Suu Kyi, who was arrested days after the 2021 coup, and Toru Kubota, a documentary filmmaker from Japan who was taken into custody this month while covering a protest in Yangon.

Danny Fenster, an American journalist who worked in Myanmar, spent more than five months in jail last year before being released on a pardon. The U.S. Embassy in Yangon said last month that another American is being "wrongfully detained" in the country.

"They're trying to create a hostage situation, a kind of hostage diplomacy," said Moe Zaw Oo, deputy foreign minister for the National Unity Government (NUG) - an administration in exile that has significant popular support. He said the junta is borrowing from the playbook of other authoritarian regimes, including Russia, which continues to hold Americans, including WNBA player Brittney Griner, whom the U.S. State Department considers to be wrongfully detained.

"The ransom in this case is some sort of political benefit," Moe Zaw Oo added about Bowman's arrest.

Myanmar's military, also known as the Tatmadaw, has been brutal in its recent crackdown on opposition forces. It has employed tactics honed over decades of suppressing ethnic minorities, including the razing of villages and the use of human shields. Faced with multiple insurgencies and the threat of being further isolated from the international community, the junta is seeking new methods of intimidation, observers say.

Military leaders are "in a fight for their survival," said Mark Farmaner, director of pro-democracy group Burma Campaign UK, which uses an alternate name for the country. "They're not playing the same international diplomatic games they used to play when they were in charge before."

Zachary Abuza, a professor at the National War College in Washington who studies Southeast Asian security issues, said the arrests will probably prompt foreign governments to prioritize the safe release of their citizens. That could weaken - or delay - a more "principled response" to the junta, he said.

Australia has shied away from imposing severe sanctions on Myanmar since the coup, lagging behind other Western powers, he noted. Foreign Minister Penny Wong said in June that Australia is weighing new sanctions but emphasized that securing the release of Turnell is the country's "first priority."

Days before Bowman was arrested, Britain announced it would be joining other countries in an International Court of Justice case alleging that the Myanmar military committed genocide against the Rohingya Muslim minority. London also said it would impose new sanctions, including against Sky One Construction Company, which has links with the son of the junta's leader, Gen. Min Aung Hlaing.

There's no immediate evidence that the arrest and the sanctions were related, but activists say the message sent to foreign governments is clear.

"It's a challenge not only to the Burmese people but to the world," said a Myanmar journalist in the United Kingdom who is longtime friends with Bowman and Htein Lin. "The message is: No one is safe."

The journalist, who spoke on the condition of anonymity for security reasons, said the arrest of Bowman, 56, and Htein Lin, 55, came as a surprise to their friends.

The couple was well known in many circles - Bowman speaks the country's dominant language fluently and has lived on and off there for more than 30 years; Htein Lin had been a student activist in the 1980s and 1990s - and their dramatic love story drew international attention.

But in recent years, they had led a relatively "low-profile" life, the journalist said. Bowman was most recently the director of the Myanmar Center for Responsible Business, a Yangon-based initiative, and was not an outspoken critic of the junta.

In an interview with local news outlet Frontier Myanmar this year, Bowman advised businesses against cozying up to the military. "Our advice is, you need to continue to follow the law," she said. "However, we do not encourage companies to stick their head up above the parapet and have a ceremonial, ribbon-cutting relationship with the government."

While she was also not a supporter of the regime, Bowman had contacts within the military, said two of her friends. This gave her some confidence that she could live safely in the country with her husband and her 14-year-old daughter, even after the coup.

When the pandemic hit, Bowman and her family moved out of Yangon to a home that Htein Lin had in Kalaw, a hilltop town in central Myanmar. A junta spokesperson said Thursday that Bowman was being charged for living at an address that she hadn't registered. Her husband, the official said, was charged "because he knew and encouraged his wife to move to his home address, contrary to the existing law."