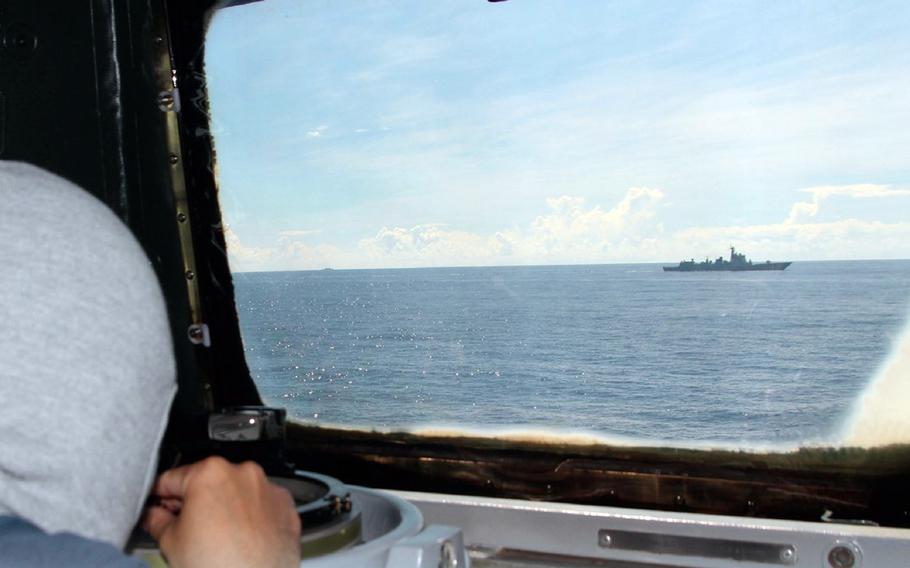 A member of the Taiwan navy keeps tabs on a Chinese vessel during an exercise surrounding the island on Saturday, Aug. 6, 2022. (Taiwan Ministry of National Defense)

The Executive Yuan, Taiwan's cabinet, proposed a record 13.9% increase in defense spending. When including a special fund for military hardware purchases, the total will be about $19.4 billion, or 2.4% of projected gross domestic product. The announcement did not include details of specific expected purchases.

The rise from about 2.2% of GDP last year comes after China, which claims the islands of 23 million as part of its sovereign territory, escalated military exercises in retribution for visits to Taipei by U.S. lawmakers. Beijing responded with live-fire drills and fury to a 19-hour stopover by House Speaker Nancy Pelosi this month, including shooting missiles into the waters around Taiwan's main island for the first time since the 1990s.

Because Taiwan is in a period of needing to strengthen and upgrade its military hardware, there is likely to be a few years of double-digit growth in military spending before leveling off, said Wang Kun-Yih, president of the Taiwan International Strategic Study Society. Taiwan's current strategy to defend against Chinese threats means the main things it needs are new fighter jets, more missiles and larger warships — all of which are expensive. As such, the jump in defense spending is "directly related to China's incessant military threats," he said.

Faced with Chinese saber-rattling, some have called for Taiwan to raise defense spending further. During a July visit, former U.S. defense secretary Mark Esper suggested that Taipei match U.S. defense expenditure as a proportion of GDP at above 3%.

He also called on Taiwan's military to purchase lightweight Javelin antitank and Stinger anti-air missile systems. This would allow for a defensive strategy of asymmetric warfare, with the emphasis on imposing steep costs on the Chinese military during a potential attack.

Taiwan has traditionally focused more on large-ticket conventional weaponry designed to repel an initial Chinese invasion. However, some analysts fear China's rapid military buildup is making this strategy increasingly untenable. Beijing set its defense budget for the year at $211.6 billion in March.

Taiwan's proposed defense budget will be formally adopted, with possible though usually minor alterations, after a vote by parliament in January. Recent Chinese drills make it much easier for the administration of Taiwanese President Tsai Ing-wen to pass the significant increase in spending, according to Yujen Kuo, president of the Institute for National Policy Research, a think tank.

Not only have Chinese drills increased operational costs for the Taiwanese military, they have spurred efforts to further asymmetric warfare strategies, the cornerstone of which is 1,000 Taiwanese-made, extended-range anti-ship missiles, including the Hsiung Feng III, he said.

Kuo added that it will be harder to maintain similarly high increases in spending starting next year as Taiwan enters campaign season ahead of the 2024 presidential election. "Military budget has no attraction to voters. It's going to be difficult to keep increasing at this rate," he said.

After four days of large-scale drills around Taiwan immediately after Pelosi's visit, the Chinese air force has continued a high frequency of incursions deep into Taiwan's air defense identification zone and often sends fighter jets briefly across the median line of the Taiwan Strait, which had for years been an unofficial maritime boundary.

On Wednesday, Taiwan verified images circulating on Chinese social media showing Taiwanese soldiers in camouflage looking up at a Chinese military drone this month and then throwing rocks as it apparently flew close over Kinmen, a Taiwan-controlled island just over 17 miles from the Chinese coast.

The Washington Post's Pei Lin Wu and Vic Chiang contributed to this report.