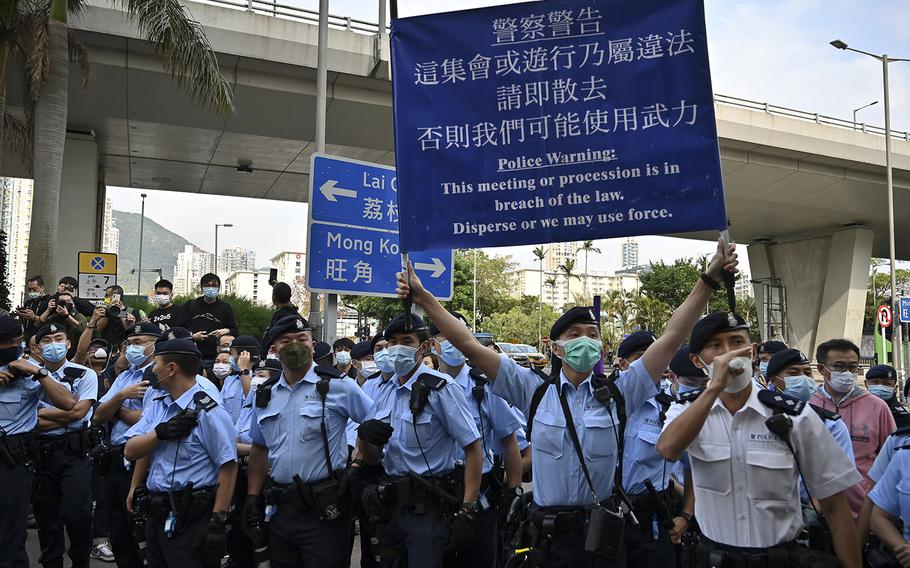 Police hold up warning banners to pro-democracy supporters gathering outside West Kowloon court in Hong Kong on March 1, 2021, ahead of court appearances by dozens of dissidents charged with subversion in the largest use yet of Beijing’s sweeping new national security law. (Peter Parks/AFP/Getty Images/TNS)

HONG KONG (Tribune News Service) — Six Hong Kongers who belonged to a pro-independence student group pleaded guilty on Saturday to charges of subverting the state under a Beijing-drafted security law, according to local media HK01.

The case of a seventh defendant remains unresolved as more time is required for legal consultation, the online news portal reported. They appeared in the Hong Kong district court.

Members of the group Returning Valiant, aged 15 to 25 at the time of their arrest last year, are accused of conspiring with other people between January and May 2021 to organize or participate in overthrowing or undermining the mainland Chinese and Hong Kong governments.

The seven were arrested last May over social media comments that could constitute subversion, the South China Morning Post reported at the time, citing unidentified people. Several posts on the group's Facebook question the government's policies on COVID, while others directly call for Hong Kongers to rise up against authorities.

"The revolution should not wait for the so-called opportunity, but wait for the opportunity to plan and resist the dictatorship of the Communist Party of China," a post dated April 5, 2021, said. "We think that the power of the government is given by the people, and we have the right to recover everything by our own means."

The activists have been held in custody since their arrest. They each face as many as seven years in prison, the maximum sentence in the district court.

Their case marks the first time a person as young as 15 years old has been charged under the national security law that was imposed by Beijing in June 2020 banning secession, subversion, colluding with foreign forces and terrorist activities. It signaled that authorities would rigorously prosecute individuals regardless of age.

Of the 114 or so people that the government has sought to prosecute under the law, including former opposition lawmakers, pro-democracy activists, journalists and academics, some 57 individuals have been charged with subversion, including the 47 activists accused of subverting the state by holding a democratic primary in 2020.

Only two defendants have so far fought security law charges at trial. Both have been convicted and handed sentences as long as nine years in prison, illustrating the high stakes for those who take on the government. Last year pro-democracy activist Tony Chung, who pleaded guilty, was sentenced to three years and four months in prison — the lightest sentence handed down to those charged under the security law.

Seven other members of Returning Valiant are facing charges of terrorism.