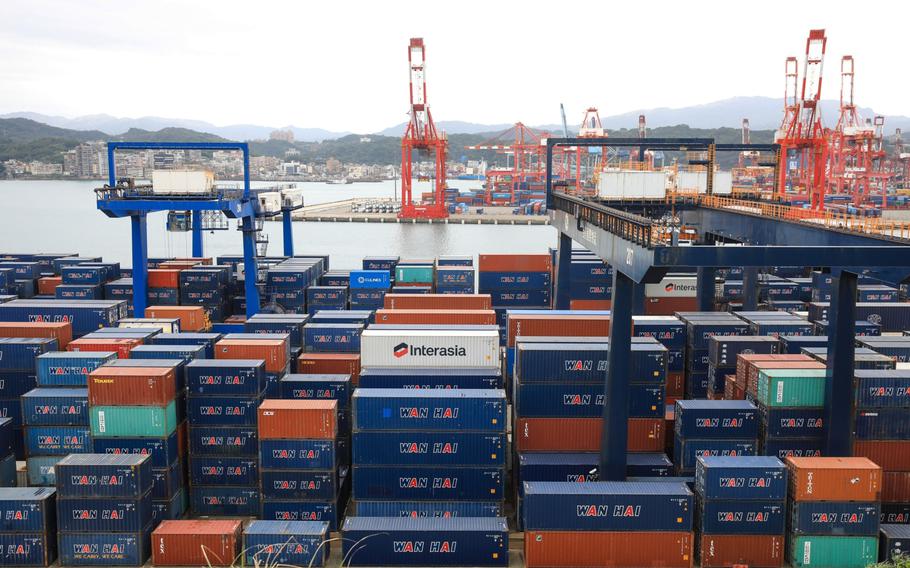 Shipping containers stacked at the Port of Keelung in Keelung, Taiwan, on Nov. 24, 2021. (I-Hwa Cheng/Bloomberg)

The U.S. and Taiwan will start formal talks on a trade and economic initiative, following through on a long-planned promise to deepen ties amid opposition from China.

The first round of trade talks is set to take place “early this fall,” the Office of the U.S. Trade Representative said in a statement Wednesday, unveiling a negotiating mandate for the U.S.-Taiwan Initiative on 21st Century Trade announced in June. Discussions will cover trade facilitation, regulatory practices, anti-corruption standards, deepening agriculture trade and other issues, the office said.

The trade negotiations “will deepen our trade and investment relationship, advance mutual trade priorities based on shared values, and promote innovation and inclusive economic growth for our workers and businesses,” the office said in the statement.

Separately, Taiwan’s Office of Trade Negotiations said in a statement that it aimed to bolster the island’s economy by promoting trade of its agricultural products and helping small and medium-sized enterprises expand to U.S. markets. Taipei also wants to increase international investor confidence in Taiwan and allow the island to “attract funds and technologies from the U.S. and the world.”

China said Thursday following the announcement that it “firmly opposes” the initiative, with the Ministry of Foreign Affairs warning the U.S. against doing any deal that could imply Taiwanese sovereignty.

The U.S. is urged to “carefully handle economic and trade relations with Taiwan and fully respect China’s core interests,” said Shu Jueting, spokeswoman for China’s Ministry of Commerce. Beijing vows “all necessary measures to resolutely safeguard sovereignty, security and development interests,” she said at a briefing.

An agreement on bolstering trade between the U.S. and Taiwan may end up being more symbolic than substantive, given reticence in both major U.S. political parties to embrace free trade agreements.

The U.S.-Taiwan trade initiative was announced weeks after President Joe Biden launched the Indo-Pacific Economic Framework in May, a deal designed to counter China’s influence in the region that didn’t feature Taipei despite more than 50 senators urging Biden to include the island.

That initiative has been criticized by trade advocates as offering little in terms of specifics on issues such as market access or lower tariffs, though it’s been welcomed as a sign of American engagement in Indo-Pacific.

Since then, Washington’s relationship with Beijing has become even more strained over Taiwan, a self-governed democracy China deems its own territory. After U.S. House Speaker Nancy Pelosi’s landmark visit to Taipei earlier this month, China launched unprecedented military drills around the island, sparking concern in the region.

“We will continue to take steps that are resolute but also calm to uphold peace and stability in the face of Beijing’s ongoing efforts to undermine the status quo,” he said. The drills held by China shrank a vaguely defined buffer zone that has long helped kept the peace around Taiwan.

China has called on the U.S. to refrain from sailing naval vessels through the Taiwan Strait, saying Beijing would take further action in the wake of Pelosi’s trip. The U.S. has long held that visits such as ones by members of congress are consistent with its “one China” policy to not formally recognize the democratically elected government in Taipei.

The initiative is “designed not only to grow trade volumes and cooperation between the United States and Taiwan but also an opportunity to assist Taiwan in building its resilience and ensuring that we have resilient and secure supply chains between us,” said Daniel Kritenbrink, U.S. assistant secretary of state for East Asian and Pacific affairs, at a briefing after the announcement.

Taiwan’s position as the world’s leading supplier of semiconductors is a linchpin of its economic relationship with the U.S., China and other nations, making the island a strategic asset for countries seeking cutting-edge chips technology. Other electronics and machinery are also major exports, along with information and communications tech.

The U.S. was Taiwan’s third largest trading partner last year, according to the island’s trade negotiations office. Shipments to the U.S. surged nearly 30% in 2021 to a record value of $65.7 billion, the fifth straight year of growth, data from Taiwan’s Ministry of Finance showed.

China and Hong Kong, meanwhile, account for around 40% of the island’s total exports, with bilateral trade between the two economies reaching $328.3 billion last year.

Taipei has been trying to reduce its economic dependence on Beijing in recent years, with President Tsai Ing-wen exploring ways to bolster trade and investment with Southeast Asia, India, Australia and New Zealand.

Taiwan already has free-trade agreements already with New Zealand and Singapore, and in 2020 lifted a ban on pork imports from the U.S. in an attempt to remove a stumbling block to a possible deal.

Last year, it applied to join the Comprehensive and Progressive Agreement for Trans-Pacific Partnership -- Asia Pacific’s biggest working trade deal -- just days after China did, and subsequently lifted a separate ban some foods from Japan. Both applications for that deal are still pending.

Taiwan’s Office of Trade Negotiations said signing trade deals with the U.S. would “not only help” Taiwan join the Comprehensive and Progressive Agreement for Trans-Pacific Partnership, but would also afford it more opportunities to “deepen institutionalized links with other countries.”

“Both sides have shown a high degree of ambition and look forward to achieving concrete results as soon as possible and signing a trade agreement,” Taiwan’s trade negotiations office added.