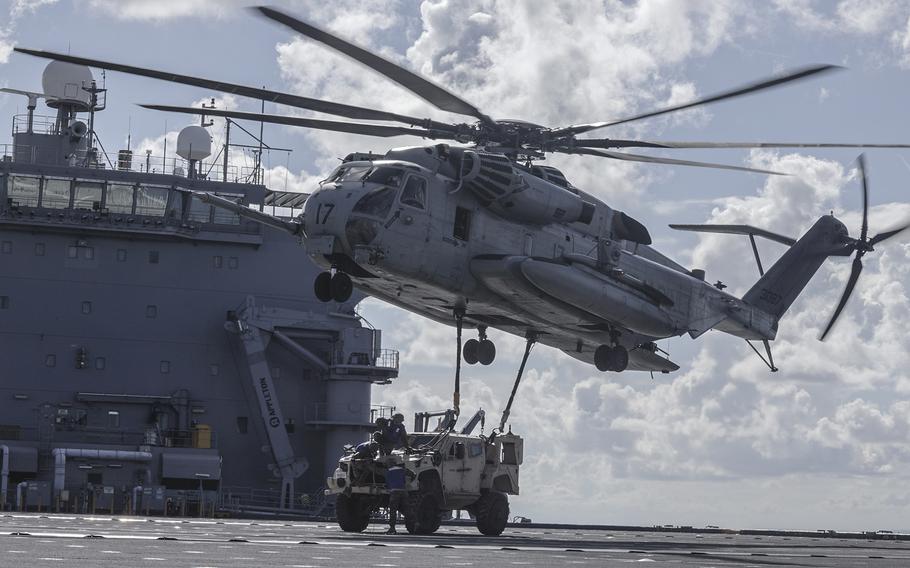 CAMP FOSTER, Okinawa — Marines from Okinawa demonstrated another facet of their commandant’s new island-fighting doctrine this week by moving a tactical vehicle by helicopter from shore to ship and back again.

Marines of Combat Logistics Battalion 31 and Marine Medium Tiltrotor Squadron 262 on Monday hauled the joint light tactical vehicle, about the size of its predecessor the Humvee, from a secured military training area near Camp Hansen to the USS Miguel Keith offshore somewhere in the Philippine Sea, according to a news release emailed Wednesday to Stars and Stripes by Capt. Pawel Puczko, spokesman for the 31st Marine Expeditionary Unit.

The demonstration marked the first time Marines moved a light tactical vehicle by air in that manner, according to the release.

The exercise showed the Marines’ ability to move combat vehicles and weapons systems between expeditionary advanced bases and ships like the Miguel Keith, a seaborne expeditionary base, Super Stallion pilot Capt. Tyler Hopping said in the release.

“The CH-53 and Helicopter Support Team provide a pretty unique capability to get those systems to otherwise inaccessible locations,” he said. 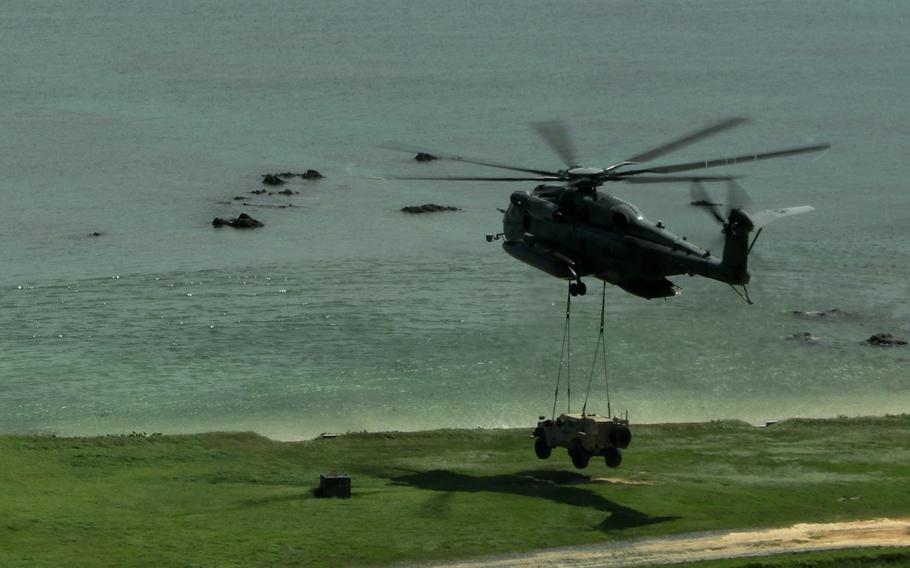 The maneuver tests a concept in expeditionary advanced base operations, a main tenet of Marine Corps Commandant Gen. David Berger’s servicewide redesign called Force Design 2030. He unveiled the concept two years ago as the Marines’ counter to the threat posed by an increasingly assertive China.

Expeditionary advanced base operations call for these mobile units to disperse inside the range of enemy missiles to seize and hold islands and sink enemy vessels at sea. The Marines on Okinawa have been rehearsing the concept piece by piece since its inception.

Force Design 2030 is not without its detractors. About two dozen retired generals, including former Defense Secretary Jim Mattis and Chairman of the Joint Chiefs of Staff Joe Dunford, have lobbied against the plan behind the scenes, Politico reported in April.