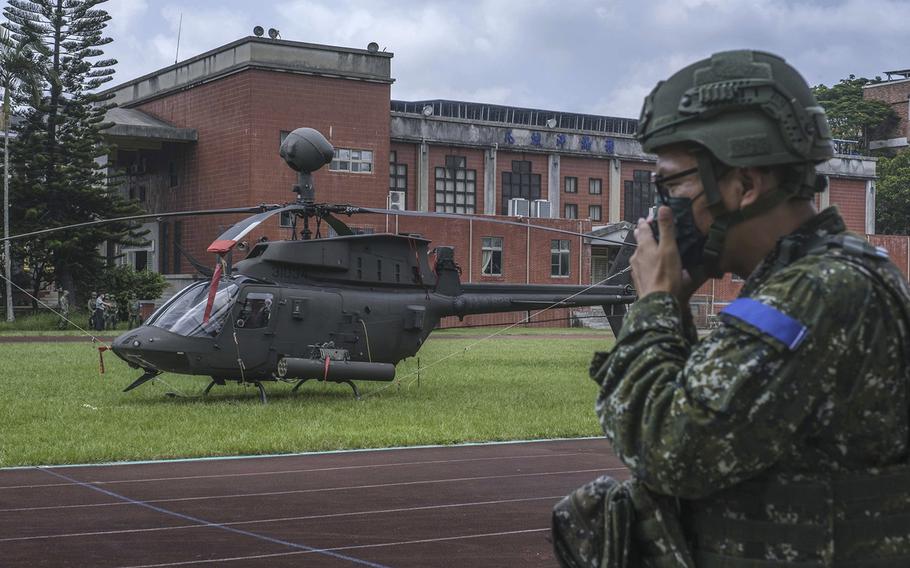 A soldier stands guard in front of a helicopter at a school during a military exercise in Hsinchu, Taiwan, on July 26, 2022. (Lam Yik Fei/Bloomberg)

A week ago, House Speaker Nancy Pelosi, D-Calif., made her trip to Taiwan. The leadership in Taipei welcomed her vows of U.S. support for the self-governing island and its democracy, as Pelosi sought to burnish her foreign policy legacy in what may be the twilight of her political career. It was, after all, the most significant visit of a U.S. official to Taiwan in a quarter-century.

But the symbolism of the moment gave way to a fiery response from China. Beijing, which views Taiwan as an integral part of its territory, cast Pelosi's visit as a dangerous provocation and evidence that Washington is hollowing out its formal position on the island. The United States neither challenges nor endorses Beijing's claim to Taiwan, even as it has long maintained close but informal political, economic and military links with Taipei.

Pelosi's visit was followed by four days of scheduled Chinese live-fire naval exercises, ballistic missile launches and aircraft maneuvers over and around Taiwan. Chinese naval forces took up positions that effectively encircled Taiwan and simulated what analysts suggested could be a future naval blockade of the island. The drills were extended Monday by the Eastern Theater Command of the People's Liberation Army, with Chinese state media announcing that the nation's forces would conduct "regular" exercises on the eastern side of the median line in the Taiwan Strait - the informal maritime boundary between the mainland and Taiwan.

Taiwanese officials counted more than 200 Chinese military aircraft and more than 50 warships in and around their territorial waters since Thursday. Beijing appears to be accelerating efforts to establish a new normal in its military posture around Taiwan.

"Meng Xiangqing, a professor at the PLA-affiliated National Defense University, told state broadcaster China Central Television in an interview published Sunday that the drills aimed to 'completely smash the so-called median line' and demonstrate China's ability to prevent foreign intervention in a conflict by blockading and controlling the Bashi Channel, an important waterway between the western Pacific Ocean and the South China Sea," my Washington Post colleagues reported.

Analysts view this as par for the course for Beijing. Under Chinese President Xi Jinping, Beijing has taken increasingly aggressive and assertive positions on many territorial disputes with its neighbors, from occupying rocky shoals in the South China Sea, to establishing an "air defense identification zone" over the Japanese-controlled Senkaku island chain it also claims, to stealthily seizing territory in the Himalayas along its rugged, contested border with India.

"Just as China changed the status quo around the Senkakus in 2012 and the Sino-Indian border in 2020, it seeks to now further change the status quo in its favor in the Taiwan Strait," noted Bonnie Glaser, a China expert at the German Marshall Fund.

This keeps with its growing clout on the world stage. "In 1995 China's defense budget was only twice the size of Taiwan's, even though China has around 60 times as many people. Today China spends more than 20 times as much as Taiwan on defense," explained the Economist, referring to the last time tensions over Taiwan were this intense. "By the Pentagon's own account, the PLA has achieved parity or surpassed America in the number of ships and submarines, surface-to-air missiles and cruise and ballistic missiles it can deploy."

Now, China has the capacity and capability to squeeze Taiwan in ways that the United States may have difficulty deterring. "Beijing's message is that Washington needs to stop boosting ties with Taiwan, and restore the diplomatic understanding that discouraged any House speaker from visiting for the past 25 years," reported Bloomberg News. "If not, China could start to restrict Taiwan's freedom to operate off its shores in the same way that it has restricted the island's ability to participate in global organizations since Taiwanese President Tsai Ing-wen's election in 2016."

For Washington and Beijing, the aftermath of Pelosi's visit has been defined by a clash of talking points. Both U.S. and Taiwanese officials emphasize that there was nothing abnormal about the speaker's visit and that China is unilaterally choosing to escalate tensions. China, meanwhile, accused the United States of abandoning its long-standing ambiguity over recognition of Taiwan and infringing on Chinese sovereignty. It chose to freeze some tracks of dialogue and collaboration with the Biden administration, including discussions over climate action.

"The U.S. and China are seriously talking past each other. This is not just about Pelosi," tweeted Evan Feigenbaum, vice president for studies at the Carnegie Endowment for International Peace and a veteran U.S. diplomat. "The U.S. thinks this is about Chinese coercion. The Chinese think this is about a drift from 'one China' to 'one China, one Taiwan.' That disconnect will lead to a very unstable new baseline."

Elsewhere in Asia, politicians are taking note. During a speech delivered Monday to mark Singapore's National Day, Prime Minister Lee Hsien-Loong warned that "a storm is gathering" around his prosperous city state, in part because of spiking U.S.-China tensions. Relations between the two powers are "unlikely to improve anytime soon," Lee said. "Furthermore, miscalculations or mishaps can easily make things much worse."

In countries like Japan and Australia, Beijing's reaction to Pelosi's visit has only hardened attitudes about the threat posed by a Chinese navy that increasingly sees the Pacific as its backyard. "Whatever fears many had about Pelosi's trip, the dramatic missile launches and live-fire drills have created a negative outcome for Beijing, by galvanizing an increasingly united chorus of critics," wrote Demetri Sevastopulo in the Financial Times.

For Taiwan, the die seems to have been cast. A few decades ago, a considerable proportion of the island's population looked favorably upon the prospect of reunification with China, excited not least by the economic promise of a closer embrace with the booming mainland. But most are convinced now that their future lies on a different, democratic path, with only six percent of Taiwanese recently surveyed supporting unification with China.

Xi has pinned his legacy in part on his ability to bring about reunification, ideally through peaceful means. But hard power may be the sole path toward achieving it. "The attractiveness of the carrots in China's Taiwan policy - economic inducements - has now fallen to its lowest point since the end of the Cold War," Wu Jieh-min, a political scientist at Taiwanese research academy Academia Sinica, said to the New York Times. "The card it holds presently is to raise military threats toward Taiwan step by step, and to continue military preparations for the use of force until, one day, a full-scale military offensive on Taiwan becomes a favorable option."