Nuclear threat is ‘back in focus,’ UN secretary-general says in Japan after Hiroshima anniversary 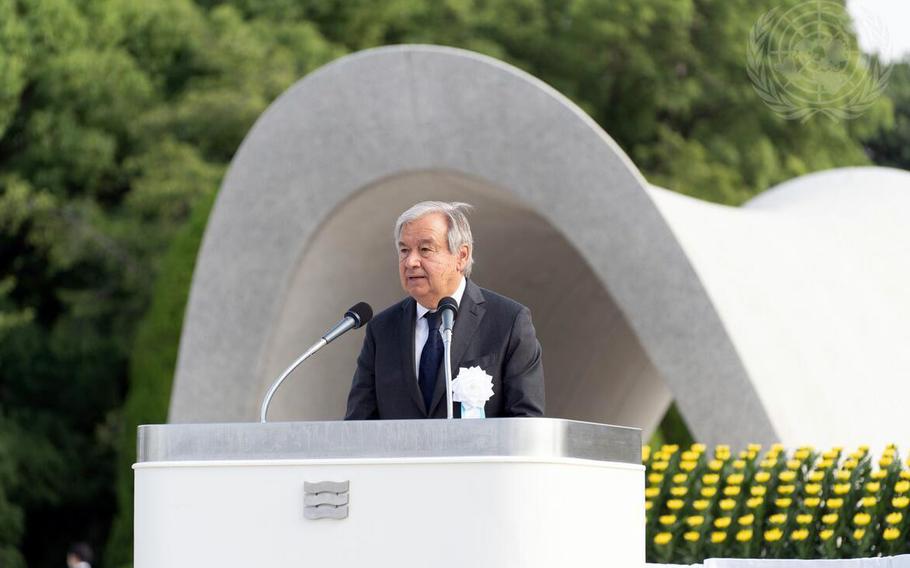 TOKYO — Nuclear-armed nations must commit to a “no first-use policy” as rising tensions between them revive the threat of nuclear war, United Nations Secretary-General Antonio Guterres said Monday.

The world is witnessing a “radicalization in the geopolitical situation,” he said during a news conference at the Foreign Correspondents’ Club of Japan. He cited as examples Russia’s invasion of Ukraine and the ongoing enmity between North and South Korea.

“Nobody can accept the idea of a new nuclear war, because that would be the destruction of the planet,” Guterres said. “What is clear is that if nobody uses [nuclear weapons] for the first time, then there will be no war.”

He added that “any attack on nuclear plants is suicidal,” referring to reports that Ukraine’s Zaporizhzhia Nuclear Power Plant — Europe’s largest — came under fire on Saturday. Both Ukraine and Russia accused each other of the attack, The Associated Press reported Sunday.

The news conference took place just two days after a short meeting between Guterres and Japanese Prime Minister Fumio Kishida, both of whom visited the Hiroshima Peace Memorial Museum on Saturday to commemorate the 77th anniversary of the bombing of Hiroshima, the world’s first use of a nuclear weapon in war.

Kishida, in the meeting, said Japan would lead international efforts toward a “world without nuclear weapons,” according to a Saturday news release from Japan’s Ministry of Foreign Affairs. Guterres responded that no other country can speak about the issue of nuclear weapons with the same “moral authority” as Japan.

“At a time when geopolitical tensions are rising and the nuclear threat is back in focus, Japan’s strong and consistent voice on this is more important,” he said Monday.

During Monday’s conference, Guterres also touched on environmental concerns in Japan, and called for global solidarity in the fight against climate change.

“Japan itself is seeing the consequences of our exploitation of fossil fuels with an unusual structure of extreme heat, followed by torrential rain,” he said. “Addiction to fossil fuels is a one-way street toward the destruction of jobs, businesses and economies and to increase conflict and disease.”

Guterres called on Japan to commit to cutting carbon emissions, invest in renewable energy technology and move away from using coal.

“With its impressive record of innovation and appreciation for the natural world, Japan has enormous potential for global leadership on the climate,” he said.

Guterres is expected to travel from Japan to Mongolia and South Korea, according to the U.N.’s website.