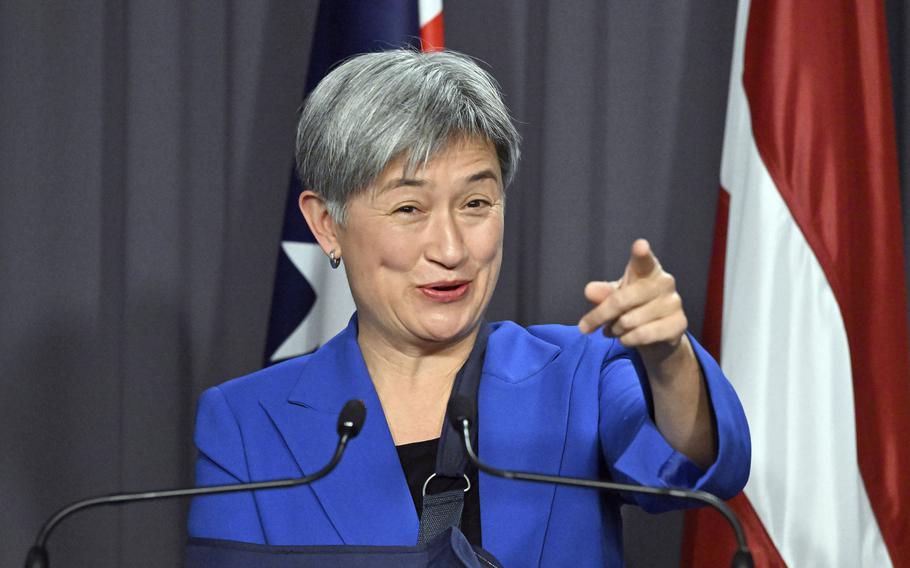 CANBERRA, Australia — Australian Foreign Minister Penny Wong on Monday called for a cooling of tensions after Beijing accused her of "finger-pointing" in her criticism of China's military exercises in response to U.S. House Speaker Nancy Pelosi's visit to Taiwan.

Wong criticized China's launch of ballistic missiles during the ongoing air and sea drills around Taiwan, which Beijing claims as part of its territory. She also signed a joint statement with the United States and Japan on Saturday that condemned firing of missiles into Japanese exclusive economic zones and accused China of "raising tension and destabilizing the region."

The Chinese Embassy in Australia replied to the trilateral statement, saying: "It is absolutely unacceptable for the finger-pointing on China's justified actions to safeguard state sovereignty and territorial integrity."

The embassy accused Australia of doing the bidding of the United States, which China described as the "biggest saboteur and destabilizer of peace in the Taiwan Strait and the biggest troublemaker to regional stability."

"We ... hope that the Australian side could treat the Taiwan question with caution, does not follow certain countries' strategy of containing China with Taiwan, and does not create new troubles and disturbances in China-Australia relations," an embassy statement said.

"What is most critical at the moment is that the temperature is lowered and calm is restored when it comes to cross-strait tensions," Wong told reporters.

Asked how Australia was a developing foreign policy independent of the United States, Wong told reporters: "Australia is always guided by our national interests."

Sherman said at the outset of talks with Wong that the United States and Australia "share a commitment in deepening cooperation with the Pacific islands who are critical partners."

Wong's call for restraint was backed by Latvian Foreign Minister Edgars Rinkevics, who was in the Australian capital Canberra for the opening of a new embassy.

"It is very important to understand that China is also very carefully watching what is happening in Europe, what is happening in Ukraine," he said. "It is very important that we work together and we provide the same kind of message of the need to have a restraint, not to overreact in their actions and not to create another regional and global hotspot."

Latvia wants Russia declared a state sponsor of terrorism and has urged other countries to follow the Latvian lead by denying all Russians any type of visa.