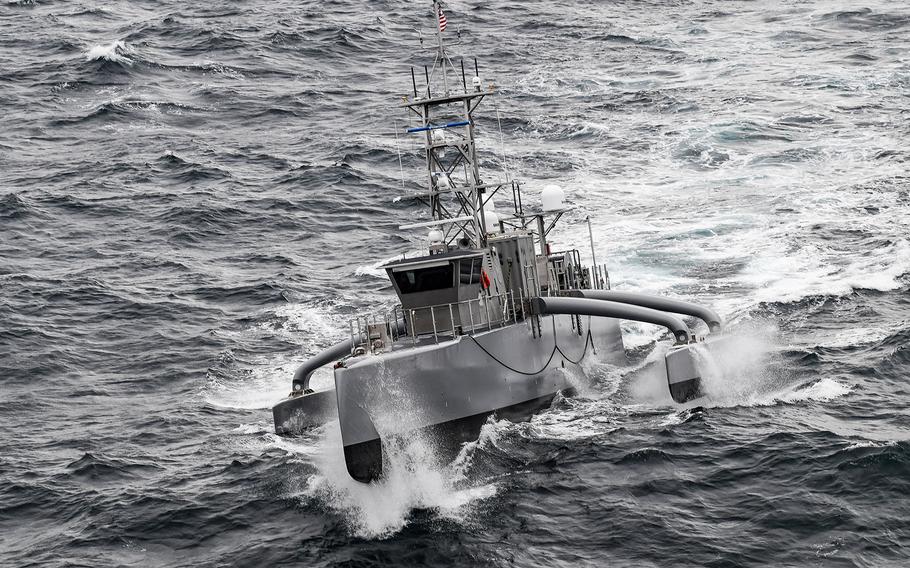 FORT SHAFTER, Hawaii — The U.S. Navy’s four unmanned surface vessel prototypes are being tested together for the first time during the monthlong Rim of the Pacific maritime exercise that ends next week.

The Navy described the first-ever gathering of the prototypes in waters off Hawaii as a “milestone” in a news release Monday.

Sea Hunter and Seahawk, designated by the Navy as medium unmanned vessels, are 132 feet long. Nomad and Ranger, which are classified as large vessels, are about 195 feet long.

The Navy envisions a future fleet of such drone ships that will operate seamlessly with manned ships.

“This is the largest event that these vessels have participated in, and RIMPAC is a very large exercise,” Cmdr. Jeremiah Daley, who heads the San Diego-based Unmanned Surface Vessel Division One, said by phone Tuesday.

Division One was established in May to manage at-sea experimentation with the prototypes looking at how unmanned vessels of this size could best be integrated with the Navy’s manned ships. Knowledge gleaned will be used as the Navy embarks on developing and procuring an operational drone fleet.

Nomad and Ranger were developed under the Pentagon’s Strategic Capabilities Office, with two similar prototypes still under development, according to a report Tuesday by the Congressional Research Service. The second pair are expected to be completed before the end of 2023, the report said.

“Each one of my unmanned surface vessels has different payloads,” he said.

“My charter and my role is to develop specific types of sensors and payloads as the warfighting operational commander desires,” he said.

The Defense Department released video in September of an SM-6 missile being launched from Ranger. The SM-6, or Standard Missile-6, is used for anti-air warfare, ballistic missile defense and anti-ship strikes.

“RIMPAC is a dedicated event that goes over the course of many weeks at sea so the opportunity to test and to integrate and to communicate tactically with manned platforms was a tremendous opportunity,” Daley said. “One of the benefits that every ship -- manned or unmanned – has the ability to take away from a large exercise is simply the ability to operate with a significant number of platforms and ships.” 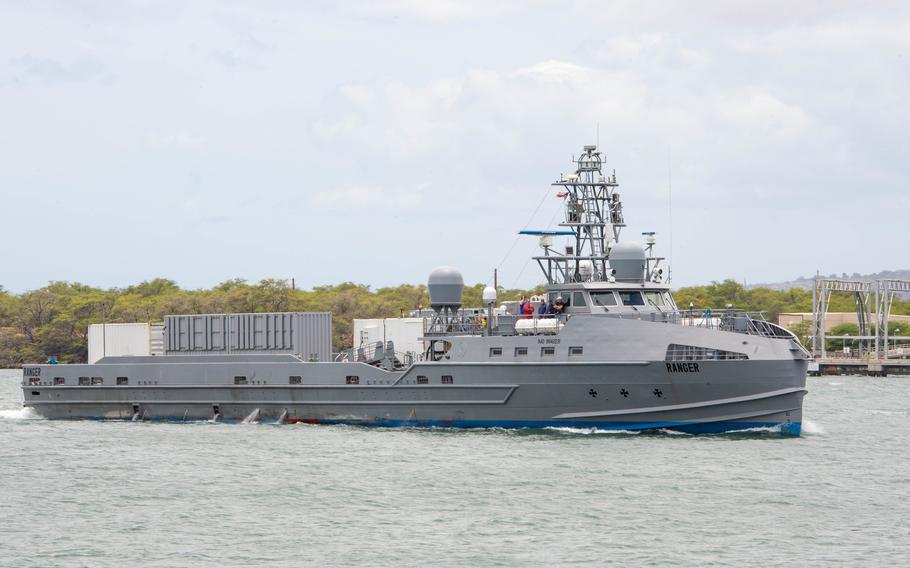 During RIMPAC, Sea Hunter and Seahawk have been paired with the destroyers USS Fitzgerald and USS William P. Lawrence.

Sensors and radars aboard the drones augment the same type of equipment on the destroyers.

The Navy requested just over $600 million for research and development of an unmanned surface fleet during the next fiscal year, the Congressional Research Service said in its report.

“The Navy wants to acquire these large UVs as part of an effort to shift the Navy to a more distributed fleet architecture, meaning a mix of ships that spreads the Navy’s capabilities over an increased number of platforms and avoids concentrating a large portion of the fleet’s overall capability into a relatively small number of high-value ships,” the report said.

The Navy projects a fleet of 27 to 153 unmanned surface vessels, depending upon various scenarios, according to the report.

Unmanned vessels will play a role in the Navy’s concept of distributed lethality.

“It’s fairly simple,” Daley said. “By the nature of having more platforms, manned or unmanned, you have the ability to have additional distributed lethality over a larger area.”