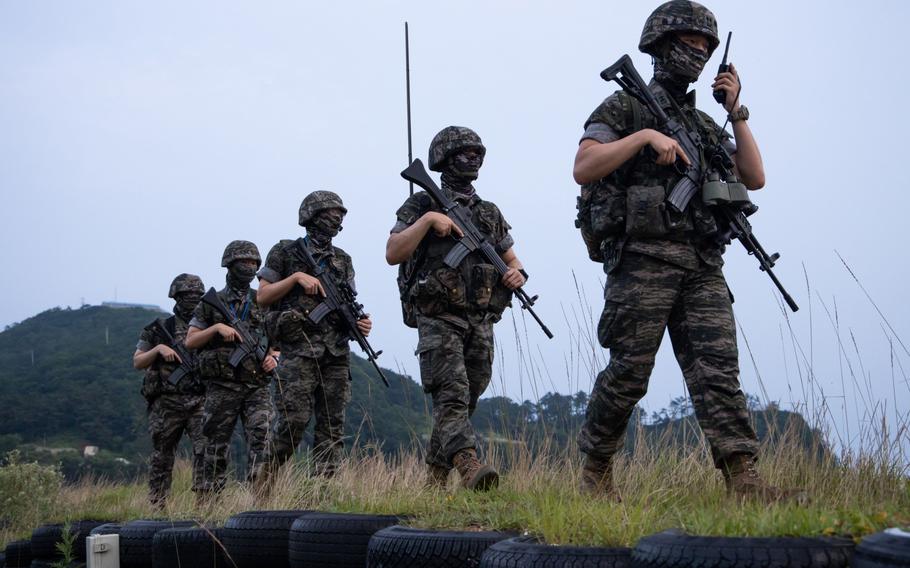 South Korea will bring back joint military exercises with the U.S. that had been scaled down or halted since about four years ago under former President Donald Trump to facilitate his nuclear negotiations with North Korea.

The government of President Yoon Suk-yeol, a conservative who took office in May on pledges of bolstering military ties with the U.S. and taking a tough line with Pyongyang, will resume combined field training drills with American troops, the Defense Ministry in Seoul said in a policy report Friday.

The two will also restore exercises that include training with aircraft carrier groups and amphibious vehicles. The sides will return to practicing war scenarios in person, replacing training over the past three years that used computerized command-and-control simulations, it said.

The allied forces will conduct 11 joint field exercises in August and September, including a large-scale drill at the Korea Combat Training Center, and change the name of the annual drill from Ulchi Freedom Guardian to Ulchi Freedom Shield, the military said.

Yoon warned Friday that North Korea could soon ratchet up tensions with its seventh nuclear test, after firing off ballistic missiles at a record pace this year. Any display of the weapons in leader Kim Jong Un’s nuclear arsenal would serve as a reminder of the pressing security problems posed by Pyongyang that have simmered as Biden’s administration focused on Russia’s invasion of Ukraine.

“We believe North Korea is prepared to conduct a nuclear test any moment they decide to do so,” Yoon said, adding he has discussed the matter with the U.S..

Satellite imagery indicated that refurbishment work and preparations at Tunnel No. 3 at Punggye-ri Nuclear Test Facility, where North Korea has conducted all six of its nuclear tests, are complete and ready for another detonation of a nuclear device, the Beyond Parallel website said in mid-June.

The moves from Seoul comes less than a week before the 69th anniversary of the July 27 signing of the armistice agreement that ended fighting in the 1950-1953 Korean War. The U.S. still has about 28,500 troops in South Korea and military leaders from the two countries have said drills are essential to prepare for any provocations by North Korea. The north positions large portions of its million-man military near the border drawn up when the cease fire took hold.

Trump’s three meetings with Kim from 2018 led to no concrete steps to wind down Pyongyang’s nuclear program, which only grew in strength and size as the in-person diplomacy eventually fizzled. The former U.S. president had repeatedly expressed frustration with the open-ended troop deployment, saying after a meeting with Kim in June 2018 that he would “like to bring them back home” but that’s not part of the equation right now.

North Korea has sought for decades to leverage the prospect of talks to scale back U.S.-South Korean military drills, something which Trump controversially agreed to during his summits with Kim. Drills were canceled in the first half of 2020 because of the coronavirus pandemic and computer simulation exercises were carried out in August 2020 and March 2021, raising concerns about the alliance’s readiness to respond in a crisis.

Since most U.S. troops are stationed in South Korea for about a year, drills are typically the only time for most of them to do real-world, widespread training with their allies. Soldiers and equipment from bases in the U.S. and Japan at times were integrated into the operations, while a U.S. aircraft group has sailed offshore for many incarnations.

The Biden administration appears ready to step up military cooperation. About a month before Yoon took office, the U.S. Navy dispatched an aircraft carrier group to waters between the Korean Peninsula and Japan for the first time since 2017.

North Korea has publicly ignored Biden’s calls to return to the bargaining table. For decades, it derided the drills as a preparation for invasion and nuclear war.